Did Modern Humans Evolve at Least Partialy from Neanderthals? 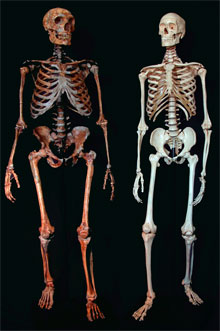 DNA from the bones of a Neanderthal baby who died 29,000 years ago offers further evidence that Neanderthals are cousins rather than ancestors of modern humans.

William Goodwin of the University of Glasgow in Scotland, along with collaborators from Russia and Sweden, report that the baby’s DNA is much more similar to another Neanderthal DNA sequence reported in 1997 than to that of modern humans.

Some anthropologists have argued that people evolved at least partly from the Neanderthals. The opposing theory is that modern humans evolved in Africa, then spread outward, overwhelming earlier hominids including Neanderthals. The short, squat Neanderthals inhabited much of Europe from about 100,000 years ago until dying out about 28,000 years ago.

"Neanderthal DNA is distinct from modern humans," Goodwin says, "and there are no examples of humans having Neanderthal-type DNA."

The baby’s mitochondrial DNA differed from that of the other Neanderthal in 3.5 percent of the locations tested, while the divergence from humans was 7 percent. Scientists consider that to be a substantial gap. "It all points away from the Neanderthal," Goodwin says.

Based on the number of differences, and the expected rate of change, Neanderthals and humans last shared a common ancestor about 500,000 years ago, the researchers say.

The Neanderthal DNA was also no more similar to the DNA of Europeans than people elsewhere, which might have been expected if Neanderthals had mated in large numbers with their human neighbors in Europe.

The baby, found in Russia’s Caucasus Mountains, has been estimated in age at somewhere between an unborn 7-month-old fetus and a newborn of a couple of months. Molecular biologist Matthias Hoss, an expert in ancient remains now working at the Swiss Institute for Cancer Research, said the research appears to support the theory that Neanderthals were an evolutionary dead end. "This adds quite a lot of confidence that the Neanderthal didn’t contribute to modern populations," he said.

Loring Brace, an anthropologist at University of Michigan and a proponent of the idea that people descended from Neanderthals — argues that features of skulls show a steady progression from Neanderthal to human — says the DNA evidence does not sway him. Different patterns of movement may have caused mitochrondial DNA to diverge more quickly in the past, he says. "The whole picture is still very spotty," Brace says.

Erik Trinkaus, an anthropologist at Washington University in St. Louis, says the DNA evidence does not disprove his assertion that the 25,000-year-old skeleton of child unearthed in Portugal is the descendent of a human-Neanderthal hybrid. The new research, he says, just shows interbreeding was not common.

"There is no contradiction," he says.
Goodwin also says his finding isn’t the final word. Perhaps Neanderthals and humans mated and produced sterile offspring, similar to mules, the crossbreed of horses and donkeys. "It’s very hard to prove any negative," Goodwin says. "I wouldn’t claim this to be conclusive."

So what caused the extinction of the Neanderthals? "Our findings suggest that there was no single climatic event that caused the extinction of the Neanderthals" says palaeoanthro-pologist Katerina Harvati. Only a controversial date for very late Neanderthal survival places their disappearance just before a major environmental shift. "Even in this case" continues Harvati "the role of climate would have been indirect, perhaps promoting competition with other human groups".

"There are three main limitations to understanding the role of climate in the Neanderthal extinction" explains palaeoecologist Chronis Tzedakis: uncertainty over the exact timing of the Neanderthal disappearance; uncertainties in converting radiocarbon dates to actual calendar years; and the chronological imprecision of the ancient climate record.

"Our novel method circumvents the last two problems" adds palaeoclimatologist Konrad Hughen. "We were therefore able to provide a much more accurate picture of the climatic background at the time of the Neanderthal disappearance".

The new method was applied by the researchers to three possible dates for the Neanderthal extinction obtained from Gorham’s cave, Gibraltar - a site thought to have been occupied by some of the latest surviving Neanderthals. The first two of these dates (~32 and ~28 thousand radiocarbon years ago) relate to conditions that are not distinct from the general climatic instability of the last glacial period. The much more controversial date of ~24 thousand radiocarbon years ago places the last Neanderthals just before a major environmental shift, with an expansion of ice sheets and onset of cold conditions in northern Europe.