Do Black Holes Have a Back Door? 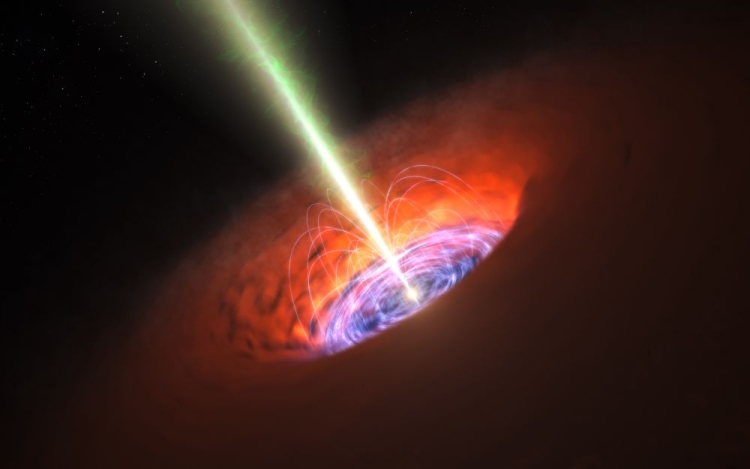 One of the biggest problems when studying black holes is that the laws of physics as we know them cease to apply. The conventional wisdom is that in a black hole, large quantities of matter and energy concentrate in an infinitely small space (known as a gravitational singularity), space-time curves towards infinity, and all matter is destroyed... Or is it?

New research at the Institute of Corpuscular Physics in Valencia, Spain suggests that if the singularity is treated as an imperfection in the geometric structure of space-time, matter may indeed survive its foray into the black hole and come out the other side -- And by doing so, resolve the problem of the infinite, space deforming, gravitational pull.

"Black holes are a theoretical laboratory for trying out new ideas about gravity," says Gonzalo Olmo, a researcher at the Universitat de Valencia (UV)in Spain. Together with Diego Rubiera from the University of Lisbon in Portugal and Antonio Sánchez, a PhD student also at the UV, Olmo analyzes black holes using theories besides General Relativity.

Specifically, in this work he has applied geometric structures similar to those of a crystal or graphene layer, not typically used to describe black holes, since these geometries appear to better match what happens inside a black hole. "Just as crystals have imperfections in their microscopic structure, the central region of a black hole can be interpreted as an anomaly in space-time, which requires new geometric elements in order to be able to describe them more precisely. We explored all possible options, taking inspiration from facts observed in nature."

Using these new geometries, the researchers obtained a description of black holes whereby the center point becomes a very small spherical surface. This surface is interpreted as the existence of a wormhole within the black hole.

"Our theory naturally resolves several problems in the interpretation of electrically charged black holes," Olmo explains. "In the first instance we resolve the problem of the singularity, since there is a door at the center of the black hole, the wormhole, through which space and time can continue."

This study is based on one of the simplest known types of black hole: rotationless and electrically charged. The wormhole predicted by the equations is smaller than an atomic nucleus, but gets bigger as the charge stored in the black hole increases. So, a hypothetical traveler entering a black hole of this kind would be stretched to the extreme, or "spaghettified," and would be able to enter and slide through the wormhole. Upon exiting they would be compacted back to their normal size.

Seen from outside, these forces of stretching and compaction would seem infinite, but the traveler himself, living it first hand, would experience only extremely intense, but not infinite, forces. It is unlikely that the star of the movie "Interstellar" would survive a journey like this, but the model proposed by the researchers posits that matter would not be lost inside the singularity, but rather would be expelled out the other side through the wormhole at its center to another region of the universe.

Another problem that this interpretation resolves, according to Olmo, is the need to use exotic energy sources to generate wormholes. In Einstein's theory of gravity, these "doors" only appear in the presence of matter with unusual properties (for example, a negative energy pressure or density), something which has never been observed. According to Olmo, "In our theory, the wormhole appears out of ordinary matter and energy, such as an electric field."

The interest in wormholes for theoretical physics goes beyond generating tunnels or doors in space-time to connect two points in the Universe. They also help explain phenomena such as quantum entanglement or the nature of elementary particles. Thanks to this new interpretation, the existence of these objects could be closer to science than fiction.