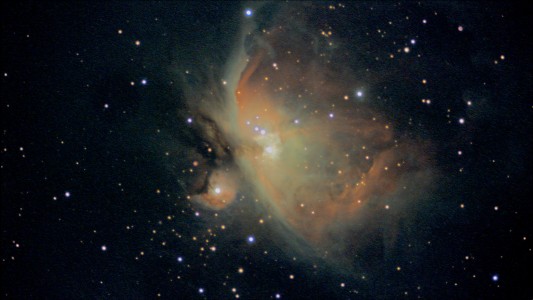 Does Jupiter Have a Bigger Brother Hiding in the Oort Cloud? 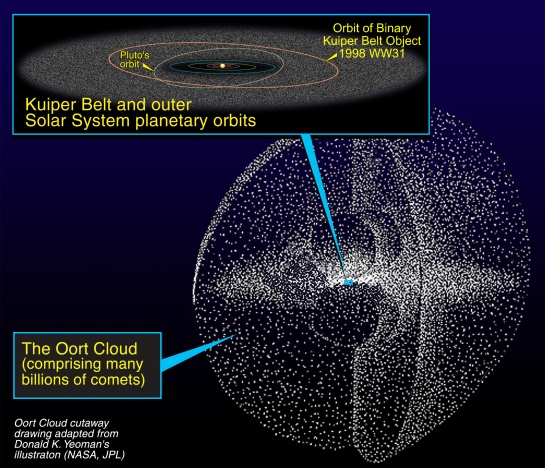 Two University of Louisiana astrophysicists believe that a huge gas giant, made up mostly of hydrogen and helium that is four times the size of Jupiter, may lie in the outer Oort cloud — the most remote part of our Solar System. According to a report by Paul Rodgers of The Independent in the UK, the gas giant's existence could explain why many long-period comets come from the wrong direction and why 20 per cent more than expected of the long-period comets observed since 1898 arrive from a band circling the sky at a higher angle than predicted by galactic-tide theory. The two astrophysicists, John Matese and Daniel Whitmire, are proposing that gravity from this yet-to-be discovered planet may be altering the course of comets and causing these anomalies.

So now the hunt is on for this gas giant thought to be lurking in the outer Oort Cloud. The orbit of Tyche, as it has been unofficially named, would be 15,000 times farther from the Sun than the Earth's, and 375 times farther than Pluto's, which is why it hasn't been seen so far.

But the two scientists believe the proof of its existence has already been gathered by NASA's Wide-field Infrared Survey Explorer (WISE) and the data is just waiting to be analyzed. WISE has been scanning the entire sky in infrared light, picking up the glow of hundreds of millions of objects and producing millions of images.

The first tranche of WISE data is to be released in April 2011, and astrophysicists John Matese and Daniel Whitmire from the University of Louisiana at Lafayette think it will reveal Tyche within two years. "If it does, John and I will be doing cartwheels," Professor Whitmire said. "And that's not easy at our age."

Once Tyche has been located, other telescopes could be pointed at it to confirm the discovery.

Whether it would become the new ninth planet would be decided by the International Astronomical Union (IAU). The main argument against it is that Tyche probably formed around another star and was later captured by the Sun's gravitational field. The IAU may choose to create a whole new category for Tyche, Professor Matese said.

The IAU would also have the final say about the gas giant's name. To the Greeks, Tyche was the goddess responsible for the destiny of cities. Her name was provisionally chosen in reference to an earlier hypothesis, now largely abandoned, that the Sun might be part of a binary star system with a dim companion, called Nemesis, that was thought responsible for mass extinctions on Earth. In myth, Tyche was the good sister of Nemesis.

"Tyche will almost certainly be made up mostly of hydrogen and helium and will probably have an atmosphere much like Jupiter's, with colourful spots and bands and clouds," Professor Whitmire said. "You'd also expect it to have moons. All the outer planets have them," he added.

What will make it stand out in the Wise data is its temperature, predicted to be around -73C, four or five times warmer than Pluto. "The heat is left over from its formation," Professor Whitmire said. "It takes an object this size a long time to cool off."

Most of the billions of objects in the Oort Cloud – a sphere one light year in radius stretching a quarter of the distance to Alpha Centauri, the brightest star in the southern constellation – are lumps of dirty ice at temperatures much closer to absolute zero (-273C).

A few of these are dislodged from their orbits by the galactic tide – the combined gravitational pull from the billions of stars towards the center of the Milky Way – and start the long fall into the inner solar system.

As these long-period comets get closer to the Sun, some of the ice boils off, forming the characteristic tails that make them visible.

Professors Matese and Whitmire first proposed the existence of Tyche to explain why many of these long-period comets were coming from the wrong direction. In their latest findings, they report that more than 20 per cent too many of the long-period comets observed since 1898 arrive from a band circling the sky at a higher angle than predicted by the galactic-tide theory.

No other proposal has been put forward to explain this anomaly since it was first suggested 12 years ago. But the Tyche hypothesis does have one flaw. Conventional theory holds that the gas giant should also dislodge comets from the inner Oort Cloud, but these have not been observed.

Professor Matese suggests this may be because these comets have already been tugged out of their orbits and, after several passes through the inner solar system, have faded to the point that they are much harder to detect.