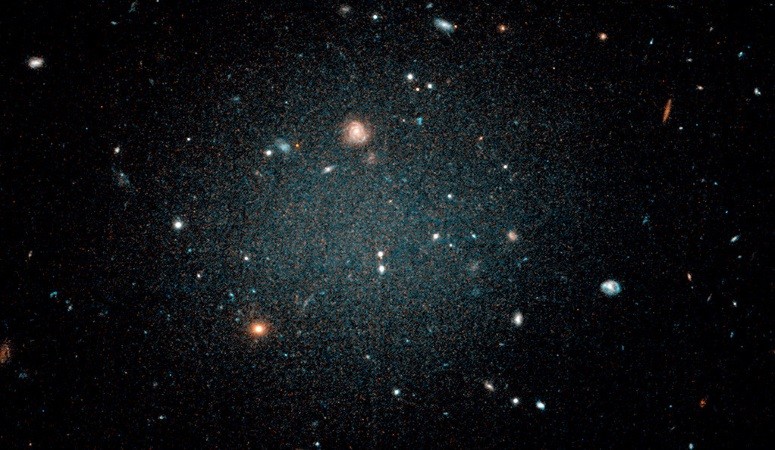 Galaxies rotate so quickly that they should fly apart according to the existing laws of physics. Two current theories attempt to explain this anomaly – the first places a halo of an imaginary and as of yet undetected substance called “Dark Matter” around every galaxy. The second, Modified Newtonian Dynamics (MOND), explains this by applying a mathematical compensation to Newtonian physics that strengthens the visible material’s gravity, but only where it gets very weak. Otherwise, gravity follows Newton’s conventional laws, as in our Solar System. Recently, an international group of astrophysicists has concluded that MOND provides a very viable explanation for the galaxy rotation anomaly and that Dark Mater does not exist. Their summary: It is remarkable that MOND continues to make such successful predictions based on equations written down 35 years ago. Throughout history, we have seen many examples where scientists have simply invented ideas out of thin air to help explain away things that are just not understood at the time. In some ways, Dark Matter and Dark Energy bring to mind another imaginary concept -- the so called "Aether Wind" of the 1800s. Back then, everybody just "knew" that space was filled with an "Aether Wind." The problem was that no one had ever seen it or measured it… And in 1887, when Albert Michelson and Edward Morley set out to prove the existence of Aether Wind once and for all, their experiment failed spectacularly -- There was no such thing. Michelson eventually won the Nobel Prize in Physics in 1907 for this work and became the first American to do so. Will the concepts of Dark Matter and Dark Energy meet the same fate as the Aether Wind of the 19th century? Time will tell.

This article demostrates a fundamental misunderstanding of dark energy, dark matter, galatic rotation rates, and inflationary models of universe. While Mond might explain a few things it leaves a vast array of other observation evidence without adquaye explanation. We certainly don't have all the answers, but Mond isnt part of the solution set. The author needs to take about five years of math astronomy and physics, and the reconsider his article.

MOND works extremely well on the scale of individual galaxies and has made successful predictions on that scale. On galaxy cluster scales MOND still requires some dark matter, but far less DM than standard models. DM continues to struggle with the visible matter dark matter coupling problem - meaning the distribution of DM is tightly coupled to the distribution of visible matter. See Bahcall & Casertano 1985. It is a 30+ year problem that is unresolved.

The big challenge for MOND is on cosmological scales.