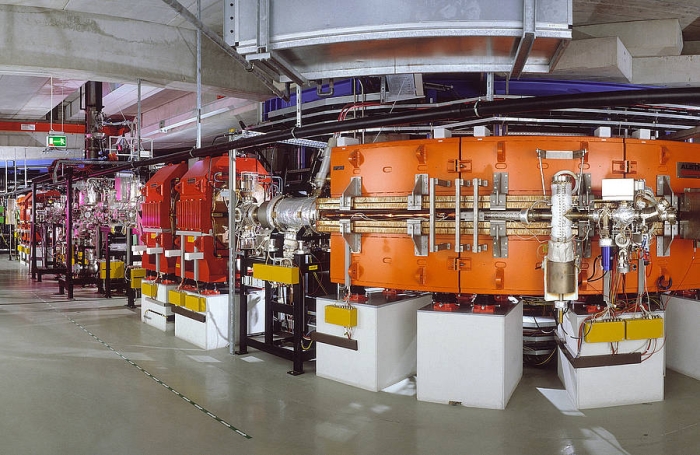 Albert Einstein's special theory of relativity and Quantum Electrodynamics (QED), which was formulated by Richard Feynman among others, are two important fundamentals of modern physics. In cooperation with colleagues from several international universities and institutes, a research group led by Professor Wilfried Nortershauser (Institute for Nuclear Physics at the Technische Universitat Darmstadt in Germany) re-examined these theories in experiments at the GSI Helmholtz Center for Heavy Ion Research. Even though they have been experimentally verified many times in the past and both have passed all the tests so far, these scientists wanted to explore any possible limits of the two theories.

To do so, the scientists looked for deviations in the experiments with increasing precision and under extreme conditions. For this purpose, Nortershauser's team accelerated ions to velocities near the speed of light and illuminated them with a laser.

The results confirm the time dilation predicted for high velocities in the theory of relativity with an accuracy that has never before been achieved. Furthermore, the team provided the first direct proof of a spectral line in highly charged bismuth ions, for which the GSI and other research institutions had been looking for in vain for almost 14 years.

In an experiment using the ESR heavy ion storage ring at GSI, the time dilation was measured at a velocity of about 34 percent of the speed of light. Einstein's prediction that the frequency of a clock depends on its speed is one of the strangest consequences of the theory of relativity. Since macroscopic clocks cannot be brought to sufficiently high velocities, the scientists used atomic clocks in the form of singly charged lithium ions.

Einstein himself proposed the basic principle of the experiment. It was carried out for the first time in 1938 by Ives and Stilwell using hydrogen atoms. It was thus possible to prove time dilation with an accuracy of 1 percent. In modern experiments, these clocks are 'read' using two laser beams. One of the beams is traveling in the same direction as the ions and is illuminating the ion from the 'back,' whereas the other one is counter propagating, illuminating the ion from the 'front.'

Photodetectors are used to observe the florescence of the ions. Fluorescent light can be continuously emitted only when both lasers simultaneously excite the ions with the resonant frequency. When the signal is at a maximum, the frequencies of both lasers are measured.

The result confirms Einstein's prediction to be accurate at a 2 PPB (Parts-Per-Billion) level, which is about four times more accurate as in the previous experiment, which was carried out at the Heidelberg Test Storage Ring at 6.4 percent of the speed of light.

A 14-year-old mystery has been solved

In a second experiment, the research group achieved a further breakthrough in a precision experiment. Here, Quantum Electrodynamics was tested in the strongest magnetic fields available in the laboratory. These fields exist on the surface of heavy atomic nuclei. They are about 100 million times higher than the strongest static magnetic fields that can be produced today using superconducting magnets. These fields become accessible in experiments with heavy, highly charged ions. The experiment used bismuth ions, which have only one electron or three of them left. While the resonance in bismuth ions with only one electron was already measured at GSI in 1994, it was impossible to observe the lithium-like bismuth until recently. But a meaningful test of QED results only from the combination of the two transitions.

These ions were accelerated in the ESR up to about 71 percent of the speed of light and illuminated with laser light. Again, the fluorescence of the ions was detected to observe the resonance. "When we started with the preparations for the experiment, it quickly became apparent that detecting the fluorescence photons was one of the most critical points" explains Dr. Matthias Lochmann from the University of Mainz.

"It is impossible to place detectors around the entire ring. Instead, we positioned a particularly efficient detection system at one point within the ring" says Dr. Raphael Johren, a member of Professor Weinheimer's research team at the University of Munster, describing his contribution to the experiment.

Using this detector, a new laser system and sophisticated data acquisition, it was possible to observe the long-sought transition. Therefore, they were able to eliminate any doubts about the theoretical prediction that had arisen in the meantime.