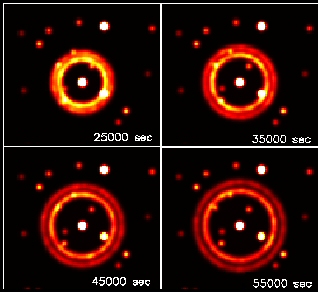 ...In this week's issue of Nature, astronomers from the Space Research Institute of the Russian Academy of Sciences and the California Institute of Technology announce in two related papers the discovery of the explosion, which was first detected on December 3, 2003, by the European-Russian Integral satellite and then observed in detail at ground-based radio and optical observatories. The burst, known by its birthdate, GRB031203, appeared in the constellation Puppis and is about 1.6 billion light-years away.

Although the burst was the closest gamma-ray burst to Earth ever studied (all the others have been several billion light-years away), researchers noticed that the explosion was extremely faint--releasing only about one-thousandth of the gamma rays of a typical gamma-ray burst. However, the burst was also much brighter than supernovae explosions, which led to the conclusion that a new type of explosion had been found.

Both supernovae and the rare but brilliant gamma-ray bursts are cosmic explosions marking the deaths of massive stars. Astronomers have long wondered what causes the seemingly dramatic differences between these events. The question of how stars die is currently a major focus of stellar research, and is particularly directed toward the energetic explosions that destroy a star in one cataclysmic event.

Stars are powered by the fusion ("burning'') of hydrogen in their interiors. Upon exhaustion of fuel in the interior, the core of massive stars collapse to compact objects--typically a neutron star and occasionally a black hole. The energy released as a result of the collapse explodes the outer layers, the visible manifestation of which is a supernova. In this process, new elements are added to the inventory of matter in the universe.

However, this nuclear energy may be insufficient to power the supernova explosions. One theory is that additional energy is generated from the matter falling onto the newly produced black hole. Many astronomers believe that this is what powers the luminous gamma-ray bursts.

But the connection between such extreme events and the more common supernovae is not yet clear, and if they are indeed closely related, then there should be a continuum of cosmic explosions, ranging in energy from that of "ordinary" supernovae to that of gamma-ray bursts.

In 1998, astronomers discovered an extremely faint gamma-ray burst, GRB 980425, coincident with a nearby luminous supernova. The supernova, SN 1998bw, also showed evidence for an underlying engine, albeit a very weak one. The question that arose was whether the event, GRB 980425/SN 1998bw, was a "freak" explosion or whether it was indicative of a larger population of low-powered cosmic explosions with characteristics in between the cosmological gamma-ray bursts and typical supernovae.

"I knew this was an exciting find because even though this was the nearest gamma-ray burst to date, the gamma-ray energy measured by Integral is one thousand times fainter than typical cosmological gamma-ray bursts," says Sergey Sazonov of the Space Research Institute, the first author of one of the two Nature papers.

The event was studied in further detail by the Chandra X-Ray Observatory and the Very Large Array, a radio telescope facility located in New Mexico.

"I was stunned that my observations from the Very Large Array showed that this event confirmed the existence of a new class of bursts," says graduate student Alicia Soderberg, who is the principal author of the other Nature paper. "It was like hitting the jackpot."

There are several exciting implications of this discovery, including the possible existence of a significant new population of low-luminosity gamma-ray bursts lurking within the nearby universe, said Shrinivas Kulkarni, who is the MacArthur Professor of Astronomy and Planetary Science at Caltech and Soderberg's faculty adviser.

"This is an intriguing discovery," says Kulkarni. "I expect a treasure trove of such events to be identified by NASA's Swift mission scheduled to be launched this fall from Cape Canaveral. I am convinced that further discoveries and studies of this new class of hybrid events will forward our understanding of the death of massive stars."