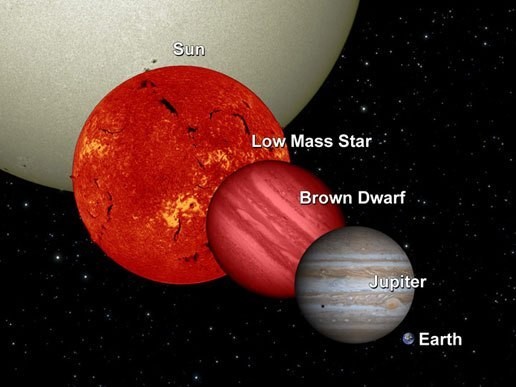 In our Solar System, Jupiter is the largest planet, being about 318 times as massive as the Earth and lying about five times farther from the Sun than does the Earth. Brown dwarfs are similar in many ways to Jupiter-like gas giants, but range from 13 to 90 times the mass of Jupiter… And while they can be up to a tenth the mass of the Sun, they lack the nuclear fusion in their core to burn as a star, so they lie somewhere between a diminutive star and a super-planet. Based on preliminary results from a new Gemini Observatory survey of 531 stars with the Gemini Planet Imager (GPI), it appears more and more likely that large planets and brown dwarfs have very different roots. While massive planets form due to the slow accumulation of material surrounding a young star, brown dwarfs come about due to rapid gravitational collapse.

I.S. Shklovsky. pointed out in a chapter of his seminal book, very simply titled "Stars", that the only way they sustain a long term equilibrium between their initial collapse and long term fate is when they achieve a balance between thermonuclear reactions and gravity.

Some brown dwarfs only have high enough temperatures to use the the high cross sectional isotopes of Deuterium, Tritium or Helium 3. Since these will run out quite quickly, and the object can never reach the P/T profile for the proton/proton chain, the object will simply cool off and fade