GR17, the 17th International Conference on General Relativity and Gravitation 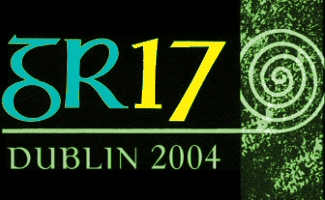 The choice of Dublin as the venue for the conference reflects the long association that the city and Ireland generally have with the subject. In particular, the late JL Synge of the Dublin Institute for Advanced Studies has had a huge influence on the field. His contribution will be celebrated in a memorial lecture by Prof. Florides of Trinity College Dublin, Chair of the Local Organising Committee.

The subject matter of the conference is all areas of general relativity and gravitation, including Classical General Relativity, Relativistic Astrophysics and Cosmology, Experimental Work on Gravity and Quantum Issues in Gravitation. The invited lecturers and workshop chairs have been chosen by the Scientific Organising Committee, which is chaired by Prof. Curt Cutler of the Albert Einstein Institute, Golm, Germany. All other aspects of the organisation of the meeting are in the hands of the Local Organising Committee.

2004 promises to be an exceptionally exciting year in General Relativity and Gravitation: the LIGO/VIRGO/GEO/TAMA network of detectors has begun generating scientific results, ushering in the era of gravitational wave astronomy. These detectors will search for gravitational wave signals of the collision of black holes, neutron star mergers and other astronomical events previously undetectable. The fundamentally new science of gravitational wave astronomy opens up a new window on the universe. Up until now, astronomy has relied on observations of electromagnetic wave signals (e.g. visible light, radio waves). The detection of gravitational waves offers a completely new perspective on the universe: they will enable us to "hear" the cosmic orchestra as well as to see it! GR17 will provide the scientific community with one of the earliest opportunities to discuss the first scientific results of this era.

- The information paradox for black holes

The Euclidean path integral over all topologically trivial metrics can be done by time slicing and so is unitary when analytically continued to the Lorentzian. On the other hand, the path integral over all topologically non-trivial metrics is asymptotically independent of the initial state. Thus the total path integral is unitary and information is not lost in the formation and evaporation of black holes. The way the information gets out seems to be that a true event horizon never forms, just an apparent horizon.

Information credits: the New Scientist and the GR17 web site.