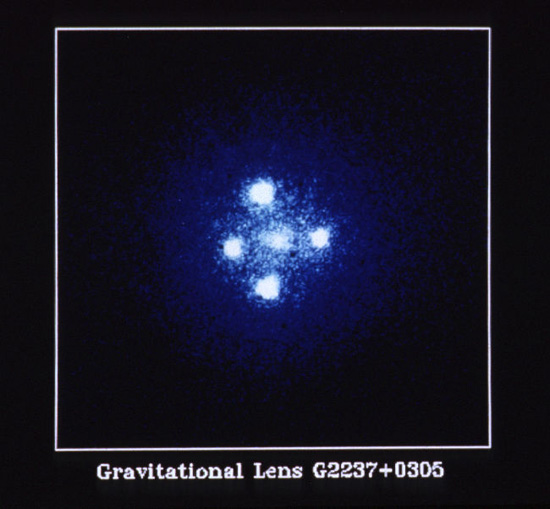 Using entire galaxies as lenses to look at other galaxies, researchers have devised a new precise way to measure the size and age of the universe and how rapidly it is expanding, on a par with other techniques. The measurement determines a value for the Hubble constant, which indicates the size of the universe, and confirms the age of the universe as 13.75 billion years old, within 170 million years. The results also confirm the strength of dark energy, responsible for accelerating the expansion of the universe.

These results were obtained by researchers at the Kavli Institute for Particle Astrophysics and Cosmology (KIPAC) at the US Department of Energy’s SLAC National Accelerator Laboratory and Stanford University, the University of Bonn, and other institutions in the United States and Germany. The researchers used data collected by the NASA/ESA Hubble Space Telescope, and showed the improved precision they provide in combination with the Wilkinson Microwave Anisotropy Probe (WMAP).

The team used a technique called gravitational lensing to measure the distances light traveled from a bright, active galaxy to the earth along different paths. By understanding the time it took to travel along each path and the effective speeds involved, researchers could infer not just how far away the galaxy lies but also the overall scale of the universe and some details of its expansion.

Oftentimes it is difficult for scientists to distinguish between a very bright light far away and a dimmer source lying much closer. A gravitational lens circumvents this problem by providing multiple clues as to the distance light travels. That extra information allows them to determine the size of the universe, often expressed by astrophysicists in terms of a quantity called Hubble's constant.

"We've known for a long time that lensing is capable of making a physical measurement of Hubble's constant," KIPAC's Phil Marshall said. However, gravitational lensing had never before been used in such a precise way. This measurement provides an equally precise measurement of Hubble's constant as long-established tools such as observation of supernovae and the cosmic microwave background. "Gravitational lensing has come of age as a competitive tool in the astrophysicist's toolkit," Marshall said.

When a large nearby object, such as a galaxy, blocks a distant object, such as another galaxy, the light can detour around the blockage. But instead of taking a single path, light can bend around the object in one of two, or four different routes, thus doubling or quadrupling the amount of information scientists receive. As the brightness of the background galaxy nucleus fluctuates, physicists can measure the ebb and flow of light from the four distinct paths. Sherry Suyu, from the University of Bonn, said, "In our case, there were four copies of the source, which appear as a ring of light around the gravitational lens."

Though researchers do not know when light left its source, they can still compare arrival times. Marshall likens it to four cars taking four different routes between places on opposite sides of a large city, such as Stanford University to Lick Observatory, through or around San Jose. And like automobiles facing traffic snarls, light can encounter delays, too.

"The traffic density in a big city is like the mass density in a lens galaxy," Marshall said. "If you take a longer route, it need not lead to a longer delay time. Sometimes the shorter distance is actually slower."

The gravitational lens equations account for all the variables such as distance and density, and provide a better idea of when light left the background galaxy and how far it traveled.

In the past, this method of distance estimation was plagued by errors, but physicists now believe it is comparable with other measurement methods. With this technique, the researchers have come up with a more accurate lensing-based value for Hubble's constant, and a better estimation of the uncertainty in that constant. By both reducing and understanding the size of error in calculations, they can achieve better estimations on the structure of the lens and the size of the universe.

There are several factors scientists still need to account for in determining distances with lenses. For example, dust in the lens can skew the results. The Hubble Space Telescope has infra-red filters useful for eliminating dust effects. The images also contain information about the number of galaxies lying around the line of vision; these contribute to the lensing effect at a level that needs to be taken into account.

Marshall says several groups are working on extending this research, both by finding new systems and further examining known lenses. Researchers are already aware of more than twenty other astronomical systems suitable for analysis with gravitational lensing.