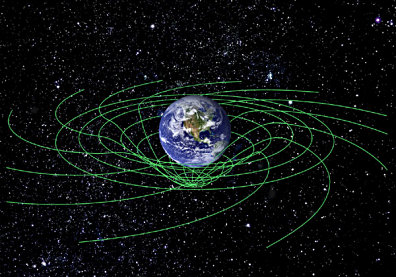 For the past three years a satellite has circled the Earth, collecting data to determine whether two predictions of Albert Einstein's general theory of relativity are correct. Professor Francis Everitt, a Stanford University physicist and principal investigator of the Gravity Probe B (GP-B) Relativity Mission, provided the first public peek at data that will reveal whether Einstein's theory has been confirmed by the most sophisticated orbiting laboratory ever created.

"Gravity Probe B has been a great scientific adventure for all of us, and we are grateful to NASA for its long history of support," said Everitt. "It's fascinating to be able to watch the Einstein warping of space-time directly in the tilting of these GP-B gyroscopes—more than a million times better than the best inertial navigation gyroscopes."

The GP-B satellite was launched in April 2004. It collected more than a year's worth of data that the Stanford GP-B science team has been poring over for the past 18 months. The satellite was designed as a pristine, space-borne laboratory, whose sole task was to use four ultra-precise gyroscopes to measure directly two effects predicted by general relativity. One is the geodetic effect—the amount by which the mass of the Earth warps the local space-time in which it resides. The other effect, called frame-dragging, is the amount by which the rotating Earth drags local space-time around with it. According to Einstein's theory, over the course of a year, the geodetic warping of Earth's local space-time causes the spin axes of each gyroscope to shift from its initial alignment by a minuscule angle of 6.606 arc-seconds (0.0018 degrees) in the plane of the spacecraft's orbit. Likewise, the twisting of Earth's local space-time causes the spin axis to shift by an even smaller angle of 0.039 arc-seconds (0.000011 degrees)—about the width of a human hair viewed from a quarter mile away—in the plane of the Earth's equator.

GP-B scientists expect to announce the final results of the experiment in December 2007, following eight months of further data analysis and refinement. Everitt and his team shared what they have found so far — namely that the data from the GP-B gyroscopes clearly confirm Einstein's predicted geodetic effect to a precision of better than 1 percent. However, the frame-dragging effect is 170 times smaller than the geodetic effect, and Stanford scientists are still extracting its signature from the spacecraft data. The GP-B instrument has ample resolution to measure the frame-dragging effect precisely, but the team has discovered small torque and sensor effects that must be accurately modeled and removed from the result.

"We anticipate that it will take about eight more months of detailed data analysis to realize the full accuracy of the instrument and to reduce the measurement uncertainty from the 0.1 to 0.05 arc-seconds per year that we've achieved to date down to the expected final accuracy of better than 0.005 arc-seconds per year," said William Bencze, GP-B program manager. "Understanding the details of this science data is a bit like an archeological dig. A scientist starts with a bulldozer, follows with a shovel, and then finally uses dental picks and toothbrushes to clear the dust away from the treasure. We are passing out the toothbrushes now."

Two important discoveries were made while analyzing the gyroscope data from the spacecraft: one, the "polhode" motion of the gyroscopes dampens over time; two, the spin axes of the gyroscopes were affected by small classical torques. Both of these discoveries are symptoms of a single underlying cause: electrostatic patches on the surface of the rotor and housing. Patch effects in metal surfaces are well known in physics and were carefully studied by the GP-B team during the design of the experiment to limit their effects. Though previously understood to be microscopic surface phenomena that would average to zero, the GP-B rotors show patches of sufficient size to measurably affect the gyroscopes' spins.

The gyroscope's polhode motion is akin to the common "wobble" seen on a poorly thrown American football, though it shows up in a much different form for the ultra-spherical GP-B gyroscopes. While it was expected that this wobble would exhibit a constant pattern over the mission, it was found to slowly change due to minute energy dissipation from interactions of the rotor and housing electrostatic patches. The polhode wobble complicates the measurement of the relativity effects by putting a time-varying wobble signal into the data.

The electrostatic patches also cause small torques on the gyroscopes, particularly when the space vehicle axis of symmetry is not aligned with the gyroscope spin axes. Torques cause the spin axes of the gyroscopes to change orientation, and in certain circumstances, this effect can look like the relativity signal GP-B measures. Fortunately, the drifts due to these torques have a precise geometrical relationship to the misalignment of the gyro spin/vehicle symmetry axis and can be removed from the data without directly affecting the relativity measurement.

Both of these discoveries first had to be investigated, precisely modeled and carefully checked against the experimental data before they could be removed as sources of error. These additional investigations have added more than a year to the data analysis, and this work is still in process. To date, the team has made very good progress in this regard.

Conceived by Stanford Professors Leonard Schiff, William Fairbank, and Robert Cannon in 1959 and funded by NASA in 1964, GP-B is the longest running, continuous physics research program at both Stanford and NASA. While the experiment is simple in concept — it utilizes a star, a telescope, and a spinning sphere — it took more than four decades and $760 million to design and produce all the cutting-edge technologies necessary to bring the GP-B satellite to the launch pad, carry out this "simple" experiment, and analyze the data.