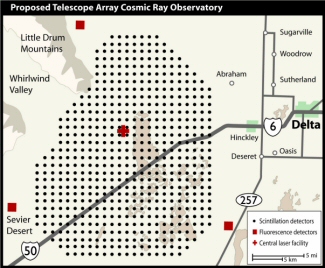 A groundbreaking ceremony will be held 9 a.m. Saturday Aug. 28 in the desert southwest of Delta, Utah, for the Telescope Array – a Japanese and American cosmic ray observatory designed to find the source of the most energetic particles in the universe.

“This is the first step towards implementation of an $18 million cosmic ray project to resolve the puzzling mysteries of the highest-energy cosmic rays,” says Kai Martens, an assistant professor of physics at the University of Utah.

Pierre Sokolsky, the university’s physics chairman, says previous research in Japan and the United States – including the university’s High-Resolution Fly’s Eye observatory at Dugway Proving Ground – “uncovered a mystery with regard to the highest-energy cosmic ray particles.”

“We don’t know where they are coming from,” Sokolsky says. “We don’t know why they are here. This groundbreaking is a guarantee there will be tremendous new data to shed light on this mystery.”

The groundbreaking ceremony atop Black Rock Mesa in Millard County is for the first of three “fluorescence detectors” to be built on hilltops. The other two will be built later on Long Ridge and between the Drum and Little Drum Mountains.

Each of the three fluorescence detectors will consist of a building with garage-type doors that open to reveal 12 sets of mirrors, each consisting of 16 segments. The mirrors will detect faint blue flashes in the night sky caused when cosmic rays hit atmospheric gas molecules.

In addition to the three hilltop fluorescence detectors, the Telescope Array also will include a “ground array” of 576 scintillation detectors sitting on 2-foot-tall steel tables that will be scattered in a vast grid on a roughly 18-by-22-mile area west of Delta, Hinckley and Deseret. The scintillation detectors will measure “air showers” of subatomic particles that reach the ground after cosmic rays hit gas molecules in the atmosphere.

The University of Utah is leasing the first three fluorescence detector sites, including Black Rock Mesa, from Utah’s School and Institutional Trust Lands Administration (SITLA), which has approved the project, Sokolsky says.

The gravel road to the site was recently improved, and a contractor started pouring the foundation for the Black Rock Mesa fluorescence detector on Wednesday Aug. 25. Sokolsky said the building should be done by the end of November, and construction of the second and third fluorescence detectors will begin in spring 2005.

The Japanese and American research team is now in the process of seeking U.S. Bureau of Land Management approval for most of the ground array of scintillation detectors, and SITLA approval for 18 of the detectors located on state land, Martens says. Scientists hope to start installing those 18 detectors for test purposes this winter.

Sokolsky says cash flow will determine how quickly the sprawling observatory is completed, but he expects it will be finished in two years, and “in three years, data will start coming out of this experiment.”

Directions to the Groundbreaking at Black Rock Mesa

Proceed roughly 11 miles south on S.R. 257, then turn west (right) onto a gravel road which proceeds along the south edge of Black Rock Mesa. The turnoff is located where S.R. 257 comes closest to Black Rock Mesa.

Follow the gravel road. After about one-half mile, the road will cut through the face of the mesa and proceed to the top. Once atop the mesa, follow the road about a mile to the groundbreaking site.

All three projects seek to understand a major puzzle: What incredibly powerful phenomenon in the universe is hurling ultrahigh-energy cosmic rays through space?

Cosmic rays, discovered in 1912, are subatomic particles: the nuclei of atoms such as hydrogen, oxygen, carbon, nitrogen or iron. Medium-energy cosmic rays come from exploding stars, while the sun and other stars emit even lower-energy cosmic rays.

But the source of ultrahigh-energy cosmic rays is unexplained. They are 100 million times more energetic than anything produced by particle smashers on Earth. Scientists theorize they may come from noisy radio galaxies, supermassive black holes at the centers of active galaxies, shock waves from colliding galaxies, bizarre sources such as so-called cosmic strings or even from the decay of massive particles left over from the “big bang” that scientists believe formed the universe about 13 billion years ago.
The University of Utah is a pioneer in cosmic ray research. After atmospheric humidity stymied a 1950s effort to observe cosmic rays from upstate New York, University of Utah physicists built a prototype in New Mexico in 1976, constructed the Fly’s Eye at Dugway Proving Ground during 1980-1981, improved it in 1986, and then upgraded it during 1994-1999 and renamed it the High-Resolution Fly’s Eye. The name comes from the use of fly-like multifaceted mirrors to observe the sky.

The highest-energy cosmic ray ever detected was measured in 1991 by the Fly’s Eye. It had an energy of 300 billion billion electron volts (billion twice is correct). That single subatomic particle carried as much energy as a fast-pitched baseball.

But the High-Resolution Fly’s Eye and Japan’s AGASA cosmic ray observatory have learned as much as they can, so a new observatory is needed.

A January 2004 news release outlining the Telescope Array project in greater detail (and a larger version of the above image) is available at: