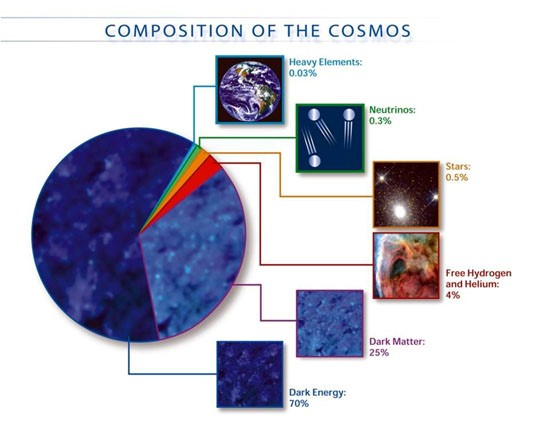 A University of Geneva researcher has shown that the accelerating expansion of the Universe and the movement of the stars in galaxies can be explained without drawing on the concepts of Dark Matter and Dark Energy... And the work is pointing to a very inconvenient conclusion -- These two entities may not actually exist. History provides us with many examples where scientists have simply invented ideas out of thin air to help explain away things that are just not understood. In some ways, Dark Matter and Dark Energy bring to mind another imaginary concept -- the so called "Aether Wind." In 1887, Albert Michelson and Edward Morley proved that there was no such thing, even though everybody just "knew" that space was filled with it. Will this new work lead to the development of a Michelson-Morley-like experiment for the 21st century that does away with the concepts of Dark Matter and Dark Energy? Time will tell.

Might it be fair to the density of all existing free photons in space adds up to significant mass? Over my lifetime the mass of a photons has been described as "negligible". Actually - if there is any mass, then the collective mass of photons in space is probably equivalent to what is called the "missing stuff". Gravitational lensing occurs everywhere in the universe. Even M31 bends light significantly, but with no points of reference and no reliable means of calculating the deviation, it seems the more magical theories would give way to focusing on what may be happening as a photon is approaching C. And - yes - I have heard both sides allow it to decay into a semantics argument - which is generally where frustration turns to mental laziness.<br><br>I am not a mathematician or a physicist, but I spoke to a strange man at an astronomy store in Tucson last year who said something like "Particle's and wave's greatest asset is the ability to do whatever the hell they want to do - but mostly unnoticed" The guy behind the counter rolled his eyes at me, but the statement stuck to me like napalm. In a way this century long hunt for unification is like forensic investigation - it may find the answer right in front of itself, but it has to try everything else first.<br><br>RSP Broken Arrow

My understanding is that photons don't have mass - otherwise they would not be able to travel at light-speed. They do have energy equal to their frequency times Planck's constant (a very small number).<br><br>As the universe expands, photos lose energy since their frequency gets red-shifted to lower frequencies. Cosmic Background Radiation photons from shortly after the Big-Bang have been red-shifted all the way down to under 3-degrees Kelvin.<br><br>Particles with mass (Conventional and Dark) should retain their energy unless they decay into more fundamental particles.<br><br>Dark Energy however increases as the universe expands since it's energy density remains constant (more space = more Dark Energy). DE should not cause gravitational lensing since it's evenly distributed unlike mass that clumps together (into galaxies and clusters) that does cause lensing.