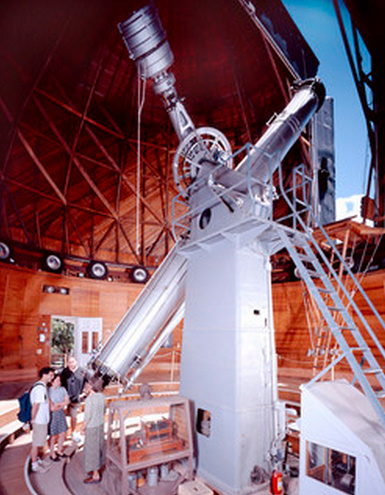 Lowell Observatory's historic Clark Telescope in Flagstaff, Arizona will soon return to tour operations after a 20 month long renovation project. The Observatory will add the Clark back to its day time tour schedule on September 5, 2015. Lowell will host a first light opening on October 3rd to which the public is invited to come view through the telescope in the evening. This will feature family friendly activities, a re-dedication ceremony, and viewing through the Clark after dark, weather permitting.

The Clark had been a mainstay of the visitor experience to Lowell for decades, but the constant heavy use resulted in parts wearing out. By 2013, the instrument was in danger of permanent damage if corrective measures weren't taken, so the Observatory undertook a fundraising campaign to support a complete renovation of the telescope and the dome that houses it.

Led by major donations from philanthropists Joe Orr and the Toomey Foundation for the Natural Sciences, plus a crowdfunding effort, the Observatory raised nearly $300,000 to complete the work. Samantha Christensen played a lead role in the fundraising effort and now serves as the
Observatory's Outreach Manager. She said, "The Clark was in desperate need of repair and the
community at large really came together to support this project."

Led by Lowell's Director of Technical Services Ralph Nye, a crew removed the telescope and examined every part, down to the nuts and bolts. Their two part goal was to return all parts to working order while cleaning and beautifying the facility. They repaired or replaced components as needed and reassembled the instrument in the dome, which also saw major repairs. The telescope now works better than when it was first built and the entire facility sparkles.

Lowell Observatory Director Jeffrey Hall said, "Hundreds of thousands of people have enjoyed the opportunity to peer through the Clark in the past. We are pleased to complete this much needed renovation so many more in the future can experience this treasure."

In 1895, Lowell Observatory founder Percival Lowell commissioned the Alvan Clark and Sons Firm of Cambridgeport, Massachusetts to build a state of the art 24 inch refracting telescope. The final product cost Lowell $20,000 and was one of the best refracting telescopes ever made. Since completion of the project the following year, the telescope has been in regular use to view the heavens and help unravel the wonders of the universe. The Clark Telescope is one of seven structures listed in the Observatory's 1964 Registered National Historic Landmark designation.

Percival Lowell initially used the telescope to further his legendary theories about intelligent life on Mars, research that brought worldwide attention to Lowell Observatory. Percival's elegant writings about his research, based on observations made with the Clark Telescope, inspired the work of both scientists, such as rocket expert Robert Goddard, and writers including science fiction icons H.G Wells and Edgar Rice Burroughs.

Later generations used the Clark Telescope to study double planets, moons, comets, and more. Of particular note, V.M. Slipher revolutionized our understanding of space with his observations of the expanding nature of the universe. He made these fundamental discoveries while using the Clark Telescope in conjunction with a spectrograph, a device astronomers use to not only determine the composition of celestial objects, but also detect their line of site motion.

In recent decades, the Clark had been used for the Observatory's public programs, allowing
guests to tour it during the day and view through it at night. Lowell historian Kevin Schindler said, "The Clark's scientific, historical, and cultural importance is staggering. It has played a major role in understanding the universe around us, first as a research instrument and later as an educational tool. Now that it is reopened, its legacy of inspiring and educating the public can continue,"

Lowell Observatory is a private, non-profit research institution founded in 1894 by Percival Lowell. The Observatory has been the site of many important discoveries including the detection of the large recessional velocities (redshift) of galaxies by Vesto Slipher in 1912-1914 (a result that led ultimately to the realization that the universe is expanding) and the discovery of Pluto by Clyde Tombaugh in 1930. Today, Lowell's 14 astronomers use ground-based telescopes around the world, telescopes in space, and NASA planetary spacecraft to conduct research in diverse areas of astronomy and planetary science. The Observatory welcomes about 80,000 visitors each year to its Mars Hill campus in Flagstaff, Arizona for a variety of tours, telescope viewing, and special programs. Lowell Observatory currently operates four research telescopes at its Anderson Mesa dark sky site east of Flagstaff and the 4.3-meter Discovery Channel Telescope near Happy Jack, Arizona.