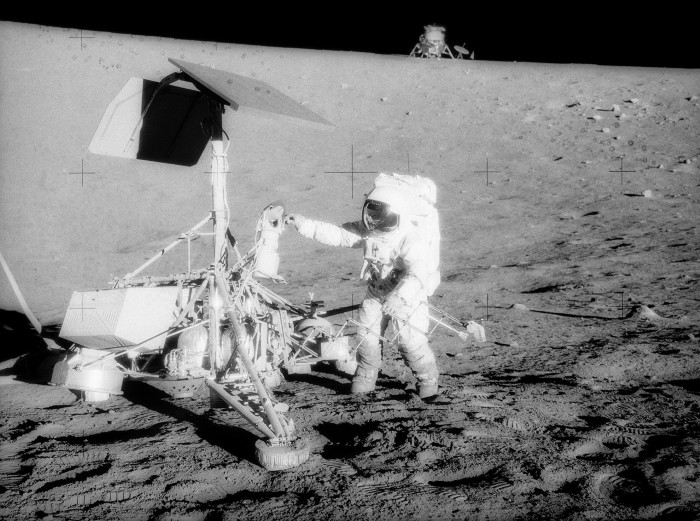 This photograph, taken by Alan L. Bean during the second Apollo 12 Extra-Vehicular Activity (EVA), shows two US spacecraft on the surface of the moon. The Apollo 12 Lunar Excursion Module (LEM) is in the background. The unmanned Surveyor 3 spacecraft, which soft-landed on the moon on April 19, 1967, is in the foreground. The Apollo 12 LEM, with astronauts Charles Conrad Jr. and Alan Bean aboard, landed about 600 feet from Surveyor 3 in the Ocean of Storms. The television camera and several other pieces were taken from Surveyor 3 and brought back to Earth for scientific examination. Here, Conrad examines the Surveyor's TV camera prior to detaching it. Astronaut Richard F. Gordon Jr. remained with the Apollo 12 Command and Service Modules (CSM) in lunar orbit while Conrad and Bean descended in the LEM to explore the moon. (Image Credit: NASA)

This year marks the 50th anniversary of the Apollo 11 Moon landing in 1969.

In all, twenty four courageous astronauts risked their lives and made the voyage from the Earth to the Moon and back between 1968 and 1972.

Neil Armstrong and Edwin "Buzz" Aldrin were the first of twelve astronauts who walked on the Moon surface.

Alan Shepard was the only member of the original Mercury 7 that had the opportunity set foot on the Moon.

Yet it is hard to believe that out of this elite group of twelve, only four of America's Moon walkers are still alive today: Buzz Aldrin (Apollo 11), David Scott (Apollo 15), Charles Duke (Apollo 16), and Harrison Schmitt (Apollo 17).

Who Walked on the Moon?

Who Orbited the Moon?

As we prepare for the next wave of Moon walkers in the coming decades, these first twenty four voyagers should forever be remembered for their contributions to the exploration of space as part of the ambitious Apollo Program – an undertaking so bold and difficult, that it has achieved an iconic stature in the history of mankind.