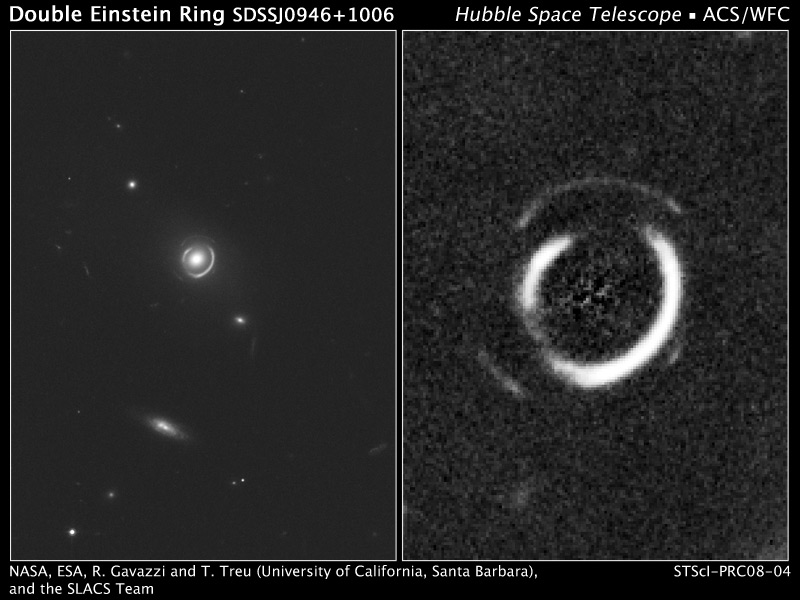 NASA's Hubble Space Telescope has revealed a never-before-seen optical alignment in space: a pair of glowing rings, one nestled inside the other like a bull's-eye pattern. The double-ring pattern is caused by the complex bending of light from two distant galaxies strung directly behind a foreground massive galaxy, like three beads on a string.

More than just a novelty, this very rare phenomenon can offer insight into dark matter, dark energy, the nature of distant galaxies, and even the curvature of the universe.

The ring was found by an international team of astronomers led by Raphael Gavazzi and Tommaso Treu of the University of California, Santa Barbara (UCSB). The discovery is part of the ongoing Sloan Lens Advanced Camera for Surveys (SLACS) program.

The phenomenon, called gravitational lensing, occurs when a massive galaxy in the foreground bends the light rays from a distant galaxy behind it, in much the same way as a magnifying glass would. When both galaxies are exactly lined up, the light forms a circle, called an "Einstein ring," around the foreground galaxy. If another background galaxy lies precisely on the same sightline, a second, larger ring will appear.

Because the odds of seeing such a special alignment are estimated to be 1 in 10,000, Treu says that they "hit the jackpot;" the odds are less than winning two consecutive bets on a single number at Roulette.

"Such stunning cosmic coincidences reveal so much about nature. Dark matter is not hidden to lensing," added Leonidas Moustakas of the Jet Propulsion Laboratory in Pasadena, Calif. "The elegance of this lens is trumped only by the secrets of nature that it reveals."

SLACS team member Adam Bolton of the University of Hawaii's Institute for Astronomy in Honolulu first identified the lens in the Sloan Digital Sky Survey (SDSS). "The original signature that led us to this discovery was a mere 500 photons (particles of light) hidden among 500,000 other photons in the SDSS spectrum of the foreground galaxy," commented Bolton.

"The twin rings were clearly visible in the Hubble image," added Treu. "When I first saw it I said ‘wow, this is insane!' I could not believe it!"

The distribution of dark matter in the foreground galaxies that is warping space to create the gravitational lens can be precisely mapped. Treu finds that the fall-off in density of the dark matter is similar to what is seen in spiral galaxies (as measured by the speed of a galaxy's rotation, which yields a value for the amount of dark matter pulling on it), though he emphasizes there is no physical reason to explain this relationship.

In addition, the geometry of the two Einstein rings allowed the team to measure the mass of the middle galaxy precisely to be a value of 1 billion solar masses. The team reports that this is the first measurement of the mass of a dwarf galaxy at cosmological distance (red shift of z=0.6).

A sample of several dozen double rings such as this one would offer a purely independent measure. The comparative radius of the rings could also be used to provide an independent measure of the curvature of space by gravity. This would help in determining the matter content of the universe and the properties of dark energy.

Observations of the cosmic microwave background (a relic from the Big Bang) favor flat geometry. A sample of 50 suitable double Einstein rings would be sufficient to measure the dark matter content of the universe and the equation of state of the dark energy (a measure of its pressure) to 10 percent precision. Other double Einstein rings could be found with wide-field space telescope sky surveys that are being proposed for the Joint Dark Energy Mission (JDEM) and recently recommended by the National Research Council.