Hubble Peers Inside a Celestial Geode 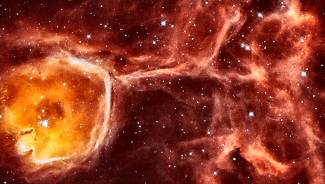 
Real geodes are baseball-sized, hollow rocks that start out as bubbles in volcanic or sedimentary rock. Only when these inconspicuous round rocks are split in half by a geologist, do we get a chance to appreciate the inside of the rock cavity that is lined with crystals. In the case of Hubble's 35 light-year diameter "celestial geode" the transparency of its bubble-like cavity of interstellar gas and dust reveals the treasures of its interior.

The Large Magellanic Cloud's N44F, is being inflated by a torrent of fast-moving particles (called a "stellar wind") from an exceptionally hot star that was once buried inside a cold dense cloud. The central star in N44F is ejecting more than a 100 million times more mass per second than our Sun. The hurricane of particles moves at about 4 million miles per hour (7 million kilometers per hour). The stellar wind from this star is colliding with an envelope of gas that surrounds the star, pushing the gas out and forming a bubble.

The nebula N44F is one of a handful of known interstellar bubbles. Bubbles like these have been seen around evolved massive stars (Wolf-Rayet stars), and also around clusters of stars (where they are called "super-bubbles"). But they have rarely been viewed around isolated stars, as is the case here.

The interior wall of its gaseous cavity is lined with several four to eight light-year-high finger-like columns of cool dust and gas. The fingers are created by a blistering ultraviolet radiation from the central star. Like windsocks caught in a gale, they point in the direction of the energy flow.

N44F is located about 160,000 light-years in our neighboring dwarf galaxy the Large Magellanic Cloud, in the direction of the southern constellation Dorado. N44F is part of the larger N44 complex, which is a large super-bubble, blown out by the combined action of stellar winds and multiple supernova explosions. N44 itself is roughly 1,000 light-years across. Several compact star-forming regions, including N44F, are found along the rim of the central super-bubble.