In the Beginning, Nothing... Then God Said "Let There Be Noise" -- An Introduction to Acoustic Cosmology 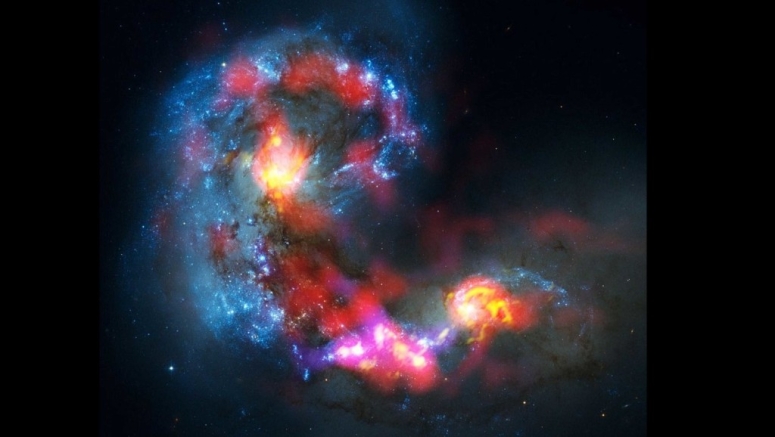 Is there a musical equivalent to the curvature of space-time? Gavin Starks thinks so. Yesterday he presented his findings at the Royal Astronomical Society's National Astronomy Meeting held at the University of Hull in the UK.

Starks, who has a background in radio astronomy and electronic music, has been working on "Acoustic Cosmology" for more than 20 years in collaboration with Professor Andy Newsam of Liverpool John Moores University in the UK. Their aim is to test whether mathematical relationships that describe cosmology and quantum mechanics can be applied to a Sonic Universe, or "Soniverse."

Starks explains "If we look at the way that music has evolved from medieval plain-song to the algorithms that generate current chart hits, we can see parallels developing in the way we describe music and descriptions of our perception of the Universe. We can now create new types of sound from scratch -- electronic sounds that simply couldn't have existed before. It leads us to think about a digital sound world that we can't enter, because it physically doesn't exist. The question is, what next?"

"We are starting to develop completely new ways of manipulating the micro-structure of sound, as well as the macro-environment in which we experience it. This raises questions about whether we can create a soniverse based on a set of fundamental equations, in the same way that we can create mathematical models of the Universe."

Starting with a single wavelength "Sonon," a fundamental particle in the soniverse equivalent to a photon, Starks has attempted to define its properties and the physics that may apply to it. The project's initial model of "wave-time" has three independent dimensions: the individual sonon wavelength, instrument time (the duration that an individual instrument plays), and performance time (duration equal to the length of an individual piece).

Some of the relationships explored to date are causal (the physics is consistent within the soniverse) and some are aesthetic (they describe a subjective musical construct). Many have direct parallels in the physical Universe. For example, the listener in the soniverse is analogous to the observer in quantum mechanics. A sonon is only rendered musical or not when it is heard. A temporal gravity allows the clustering of sonons to create rhythms or musical phrases. Wave-time can be bent by clusters of sonons, in the same way that gravity distorts space-time in the Universe.

Starks believes that bringing together cutting-edge science and understanding of musical structure creates the opportunity for discovery. "There's a long common history between physics and music, for instance people built columns in cathedrals at a height linked to the resonant frequency, even before they understood the nature of pressure dynamics. It's a relatively recent phenomenon that art and science are treated as different disciplines. By bringing them back together, and creating a common language, we can find different ways of interpreting and thinking about both music and cosmology."

Newsam adds: "As astronomers, our experience of the Universe is essentially visual -- images, graphs, and so on. With the soniverse, we hope to create a new way to appreciate the cosmos, using our instinctive grasp of music and tone to explore relationships between different objects and cosmological models."