Interior of the Moon Has Not Yet Cooled and Hardened 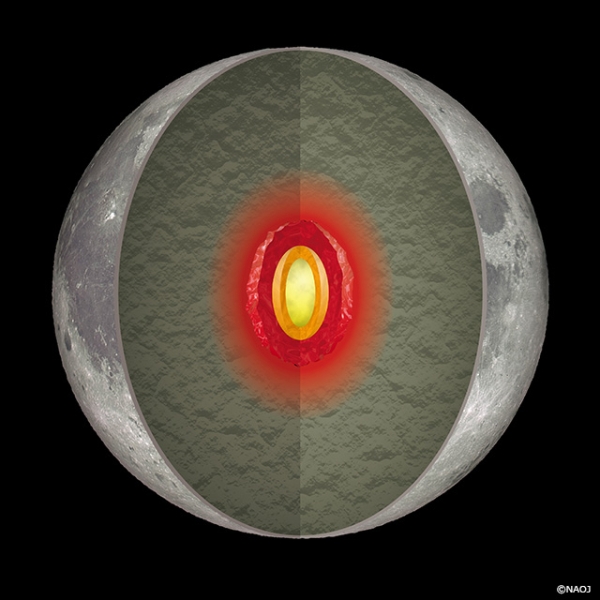 An international research team, led by Dr. Yuji Harada from Planetary Science Institute, China University of Geosciences, has found that there is an extremely soft layer deep inside the Moon and that heat is effectively generated in the layer by the gravity of the Earth. These results were derived by comparing the deformation of the Moon as precisely measured by JAXA's Kaguya and other space probes with theoretically calculated estimates.

The Kaguya space probe was launched by the Japan Aerospace Exploration Agency (JAXA) on September 14, 2007 from the Tanegashima Space Center, which is located on an island 115 km south of Kyushu, Japan. The major objective of the Kaguya mission is to obtain scientific data of the lunar origin and evolution and to develop the technology for future lunar exploration. Kaguya consists of a main orbiting satellite at about 100 km altitude and two small satellites (Relay Satellite and VRAD Satellite) in polar orbit.

The latest findings suggest that the interior of the Moon has not yet cooled and hardened, and also that it is still being warmed by the tidal effect of the Earth on the Moon. This research provides a chance to reconsider how both the Earth and the Moon have been evolving since their births through mutual influence until now.

The Moon is no exception. We can learn about the interior of our natural satellite from its deformation caused by the tidal force of the Earth. The deformation has already been well known through several geodetic observations. However, models of the internal structure of the Moon as derived from past research could not account for the deformation precisely observed by the recent lunar exploration programs.

Therefore, the research team performed theoretical calculations to understand what type of internal structure of the Moon would lead to the observed change of the lunar shape.

What the research team focused on is the structure deep inside the Moon. During the Apollo program, seismic observations were carried out on the Moon. One of the analysis results concerning the internal structure of the Moon based upon the seismic data indicates that the satellite is considered to consist mainly of two parts: the "Core," the inner portion made up of metal, and the "Mantle," the outer portion made up of rock. The research team has found that the observed tidal deformation of the Moon can be well explained if it is assumed that there is an extremely soft layer in the deepest part of the lunar mantle. The previous studies indicated that there is the possibility that a part of the rock at the deepest part inside the lunar mantle may be molten. This research result supports the above possibility since partially molten rock becomes softer. This research has proven for the first time that the deepest part of the lunar mantle is soft, based upon the agreement between observation results and the theoretical calculations.

Furthermore, the research team also clarified that heat is efficiently generated by the tides in the soft part, deepest in the mantle. In general, a part of the energy stored inside a celestial body by tidal deformation is changed to heat. The heat generation depends on the softness of the interior. Interestingly, the heat generated in the layer is expected to be nearly at the maximum when the softness of the layer is comparable to that which the team estimated from the above comparison of the calculations and the observations. This may not be a coincidence. Rather, the layer itself is considered to be maintained as the amount of the heat generated inside the soft layer is exquisitely well balanced with that of the heat escaping from the layer. Whereas previous research also suggests that some part of the energy inside the Moon due to the tidal deformation is changed to heat, the present research indicates that this type of energy conversion does not uniformly occur in the entire Moon, but only intensively in the soft layer. The research team believes that the soft layer is now warming the core of the Moon as the core seems to be wrapped by the layer, which is located in the deepest part of the mantle, and which efficiently generates heat. They also expect that a soft layer like this may efficiently have warmed the core in the past as well.

Concerning the future outlook for this research, Dr. Yuji Harada, the principle investigator of the research team, said, "I believe that our research results have brought about new questions. For example, how can the bottom of the lunar mantle maintain its softer state for a long time? To answer this question, we would like to further investigate the internal structure and heat generating mechanism inside the Moon in detail. In addition, another question has come up -- How has the conversion from the tidal energy to the heat energy in the soft layer affected the motion of the Moon relative to the Earth, and also the cooling of the Moon? We would like to resolve those problems as well so that we can thoroughly understand how the Moon was born and has evolved."

Another investigator, Professor Junichi Haruyama of the Institute of Space and Aeronautical Science, Japan Aerospace Exploration Agency, mentioned the significance of this research, saying, "A smaller celestial body like the Moon cools faster than a larger one like the Earth does. In fact, we had thought that volcanic activities on the Moon had already come to a halt. Therefore, the Moon had been believed to be cool and hard, even in its deeper parts. However, this research tells us that the Moon has not yet cooled and hardened, but is still warm. It even implies that we have to reconsider the question as follows -- How have the Earth and the Moon influenced each other since their births? That means this research not only shows us the actual state of the deep interior of the Moon, but also gives us a clue for learning about the history of the system including both the Earth and the Moon."