Is Dark Energy Just an Illusion? Neutron Star Collisions May Provide the Answer 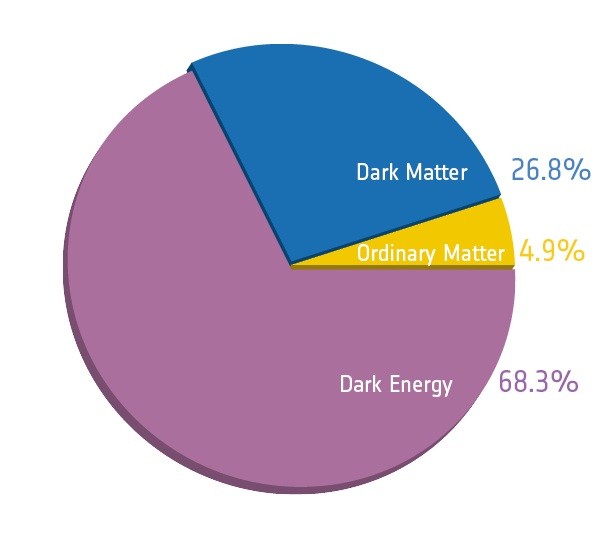 This pie charts shows the generally accepted make-up of the Universe from the Wilkinson Microwave Anisotropy Probe (WMAP) observations of the Cosmic Microwave Background (CMB). As can be seen from the chart, a huge amount of dark energy is necessary to explain cosmological phenomena such as the accelerated expansion of the Universe with Einstein’s theory. But what if dark energy was just an illusion and general relativity itself had to be modified? A new SISSA study offers a new approach to answer this question. Thanks to huge computational and mathematical effort, scientists produced the first simulation ever of merging binary neutron stars with theories beyond general relativity that reproduce a dark energy-like behavior on cosmological scales. This allows the comparison of Einstein’s theory and modified versions of it. With sufficiently accurate data, we may be able to solve the dark energy mystery and actually test the results with next-generation gravitational interferometers that are currently in the works. (Content Credit: SISSA – Scuola Internazionale Superiore di Studi Avanzati, Trieste, Italy) (Image Credit: University of Oregon)

Is Dark Energy Just an Illusion? Neutron Star Collisions May Provide the Answer

Is dark energy just an illusion? The truth is that no one really knows -- More is unknown about dark energy than is known. Many researchers claim to “know” how much dark energy there is due to its apparent affect on the Universe's expansion. But other than that, it is a complete mystery. If it exists at all, then roughly 68 percent of the Universe could be composed of this mysterious dark energy, with the equally mysterious dark matter making up about 27 percent. The rest - everything on Earth, everything ever observed in the Universe with all of our instruments, all normal matter – would add up to less than 5 percent of the Universe.

One explanation for how space acquires dark energy comes from the quantum theory of matter. In this theory, "empty space" is actually full of temporary ("virtual") particles that continually form and then disappear. But when physicists tried to calculate how much energy this would give empty space, the answer came out wrong – and wrong by a lot. The number came out 10^120 times too big. That's a 1 with 120 zeros after it. It's hard to get an answer that bad. So the mystery continues.

Another explanation for dark energy is that it is a new kind of dynamical energy fluid or field, something that fills all of space but something whose effect on the expansion of the Universe is the opposite of that of matter and normal energy. Some theorists have named this "quintessence," after the fifth element of the Greek philosophers. But, if quintessence is the answer, we still don't know what it is like, what it interacts with, or why it exists. So the mystery continues.

A last possibility is that Einstein's theory of gravity is not correct. That would not only affect the expansion of the Universe, but it would also affect the way that normal matter in galaxies and clusters of galaxies behaved. This fact would provide a way to decide if the solution to the dark energy problem is a new gravity theory or not. We could observe how galaxies come together in clusters. But if it does turn out that a new theory of gravity is needed, what kind of theory would it be? How could it correctly describe the motion of the bodies in the Solar System, as Einstein's theory is known to do, and still give us the different prediction for the universe that we need? There are candidate theories, but none are compelling. So the mystery continues.

The thing that is needed to decide between dark energy possibilities - a property of space, a new dynamic fluid, or a new theory of gravity - is more and better data. Researchers at the Scuola Internazionale Superiore di Studi Avanzati (SISSA) in Trieste, Italy have been working on this problem and now have the first simulation of neutron star mergers that reproduce a dark energy-like behavior on cosmological scales. So far, their findings that dark energy is just an illusion are consistent with data acquired by the LIGO and Virgo interferometers during recently captured binary neutron star collisions and may be further tested and supported by next-generation gravitational interferometers, such as the Einstein telescope in Europe and Cosmic Explorer in USA.

For about 100 year, general relativity has been very successful at describing gravity on a variety of regimes, passing all experimental tests on Earth and the solar system. However, to explain cosmological observations such as the observed accelerated expansion of the Universe, we need to introduce dark components, such as dark matter and dark energy, which still remain a mystery.

But a huge amount of mysterious dark energy is necessary to explain cosmological phenomena such as the accelerated expansion of the Universe with Einstein’s theory as it stands. What if dark energy was just an illusion and general relativity itself had to be modified? A new SISSA study offers a new approach to answer this question. Thanks to huge computational and mathematical effort, scientists produced the first simulation ever of merging binary neutron stars in theories beyond general relativity that reproduce a dark energy-like behavior on cosmological scales.

Enrico Barausse, an astrophysicist at SISSA questions whether dark energy is real or, instead, just a breakdown of our understanding of gravity. “The existence of dark energy could be just an illusion,” he says. “The accelerated expansion of the Universe might be caused by some yet unknown modifications of general relativity, a sort of “dark gravity.”

The merger of neutron stars offers a unique situation to test this hypothesis because gravity around them is pushed to the extreme. “Neutron stars are the densest stars that exist, typically only 10 kilometers in radius, but with a mass between one or two times the mass of our Sun,” explains the scientist. “This makes gravity and the spacetime around them extreme, allowing for abundant production of gravitational waves when two of them collide. We can use the data acquired during such events to study the workings of gravity and test Einstein’s theory in a new window.”

In this study, the SISSA scientists in collaboration with physicists from Universitat de les Illes Balears in Palma de Mallorca in Spain, produced the first simulation of merging binary neutron stars in theories of modified gravity relevant for cosmology. “This type of simulations is extremely challenging,” states Miguel Bezares, first author of the paper, “because of the highly non-linear nature of the problem. It requires a huge computational effort -- months of run in supercomputers – that was made possible also by the agreement between SISSA and CINECA consortium as well as novel mathematical formulations that we developed. These represented major roadblocks for many years till our first simulation.”

Thanks to these simulations, researchers are finally able to compare general relativity and modified gravity. “Surprisingly, we found that the ‘dark gravity’ hypothesis is equally good as general relativity at explaining the data acquired by the LIGO and Virgo interferometers during past binary neutron star collisions. Indeed, the differences between the two theories in these systems are quite subtle, but they may be detectable by next-generation gravitational interferometers, such as the Einstein telescope in Europe and Cosmic Explorer in USA. This opens the exciting possibility of using gravitational waves to discriminate between dark energy and ‘dark gravity’,” Barausse concludes.