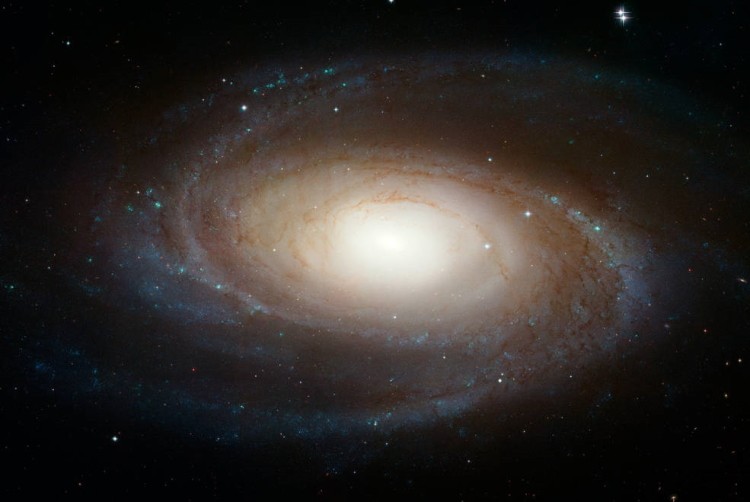 Discovered by the German astronomer Johann Elert Bode in 1774, M81 (also known as Bode’s Galaxy) is one of the brightest galaxies in the night sky. It is located 11.6 million light-years from Earth in the constellation Ursa Major and has an apparent magnitude of 6.9. Through a pair of binoculars, the galaxy appears as a faint patch of light in the same field of view as M82. A small telescope will resolve M81’s core. The galaxy is best observed during April. This stunning Hubble image was assembled using observations in visible and infrared light. The galaxy’s spiral arms, which wind all the way down into its nucleus, are made up of young, bluish, hot stars formed in the past few million years. They also host a population of stars formed in an episode of star formation that started about 600 million years ago. Ultraviolet light from hot, young stars is fluorescing the surrounding clouds of hydrogen gas. A number of sinuous dust lanes also wind all the way into the nucleus of M81. The galaxy’s central bulge contains much older, redder stars. It is significantly larger than the Milky Way’s bulge. A black hole of 70 million solar masses resides at the center of M81 and is about 15 times the mass of the Milky Way’s central black hole. Previous Hubble research showed that the size of the black hole in a galaxy’s nucleus is proportional to the mass of the galaxy’s bulge. [Video and Content Credits: NASA, JPL – Caltech, and the Office of Public Outreach – STScI] [Image Credit: NASA, ESA and the Hubble Heritage Team (STScI/AURA)]

Welcome to the night sky report for April 2021 -- Your guide to the constellations, deep sky objects, planets, and celestial events that are observable during the month. Clear April nights are filled with starry creatures. Near the Big Dipper, you will find several interesting binary stars. You can also spot galaxies like the Pinwheel Galaxy, M82, and M96—the last of which is an asymmetric galaxy that may have been gravitationally disrupted by encounters with its neighbors.

What are some additional skywatching highlights in April 2021? Look for the rosy arch known as the Belt of Venus at sunset, and then find the constellation Leo overhead on April evenings. Also, check out Jupiter and Saturn with the Moon on April 6.

The Big Dipper, which forms part of the bear, is one of the most familiar star patterns in the sky. In the middle of the handle lie Mizar and Alcor, a double star discernable with the naked eye. A telescope shows Mizar and Alcor as a diamond-white pair of stars. In fact, this is a six-star system: Alcor is itself a binary, while Mizar is actually two sets of binaries—a quadruple star.

During the spring, our view is away from the cloudy plane of the Milky Way, and the clearer view reveals

other galaxies. Near the end of the Big Dipper’s handle lies the Pinwheel Galaxy, also known as M101. A ground-based telescope reveals its spiral shape. With the eye of the Hubble Space Telescope, we can see individual stars that make up this spiral galaxy. The Pinwheel Galaxy is similar in both size and shape to our own Milky Way galaxy.

Beyond the Big Dipper’s bowl lies a pair of galaxies: M81 and M82. The two galaxies are relatively nearby, just 12 million light-years away—and very close to each other— just 150,000 light-years apart. South of the Great Bear roams another great beast: Leo the Lion. Leo’s bright heart is marked by the star Regulus—a system of four stars—two double stars circling each other.

Within Leo’s stomach lie a number of galaxies. Two of them—M95 and M96—are large spirals. An infrared view of M95 shows an orderly galaxy seen face-on. A visible light view of M96 shows an asymmetric galaxy, probably gravitationally disrupted by encounters with its neighbors.

On Tuesday morning, April 6, 2021, the planet Saturn will appear to the upper left of the waning crescent Moon, with the bright planet Jupiter appearing farther to the left. Saturn will rise first in the east-southeast about 1 hour, 45 minutes before morning twilight begins at 4:03 a.m. EDT, the Moon rises about 19 minutes later at 4:22 a.m., and Jupiter about 17 minutes after the Moon at 4:39 a.m. The Moon will appear about 12 degrees above the southeastern horizon as morning twilight begins at 5:45 a.m.

Sunday night, April 11, 2021, at 10:31 p.m. EDT, will be the new Moon, when the Moon passes between the Earth and the Sun and will not be visible from the Earth. The day of – or the day after – the New Moon marks the start of the new month for most lunisolar calendars. In the Hebrew calendar, sundown on Sunday, April 11, 2021, will mark the start of Iyar.

In the Islamic calendar the months start with the first sighting of the waxing crescent Moon. Many Muslim communities now follow the Umm al-Qura Calendar of Saudi Arabia, which uses astronomical calculations to start the months in a more predictable way (intended for civil and not religious purposes). Because of its religious significance, Ramadan is one of four months in the Islamic year where the start of the month is updated in the Umm al-Qura Calendar based upon the actual sighting of the crescent Moon. This calendar predicts the holy month of Ramadan may start with sunset on Monday, April 12, 2021, but the actual start will be adjusted based on observations of the crescent Moon. Ramadan is honored as the month in which the Quran was revealed. Observing this annual month of charitable acts, prayer, and fasting from dawn to sunset is one of the Five Pillars of Islam.

In India's time zone, Tuesday, April 13, 2021, marks the start of Chaitra, the first month of the Hindu lunisolar religious calendar. The first of Chaitra is celebrated as New Year's Day and is known as Gudi Padwa in Maharashtra, Chaitra Vishu or Puthandu in Tamil Nadu, and Ugadi in Karnataka and Andhra Pradesh. This starts the nine-day New Years’ celebration called Chaitra Navratri. These nine days are dedicated to forms of the Goddess Shakti. Many of the customs and rituals followed during Chaitra Navratri are similar to those for the fall celebration called Shardiya Navratri (in September or October).

On Sunday evening, April 18, 2021, the planet Mercury will be passing on the far side of the Sun as seen from the Earth, called superior conjunction. Because Mercury orbits inside of Earth, Mercury will be shifting from the morning sky to the evening sky and will begin emerging from the glow of dusk on the western horizon later in April (depending upon viewing conditions).

Tuesday evening will be the first evening that the bright planet Venus will be just barely above the horizon in the west-northwest 30 minutes after sunset (an approximation of when Venus will start becoming visible in the evening sky).

The annual Lyrid meteor shower is expected to peak early in the morning on Thursday, April 22, 2021. This year, the light of the waxing gibbous Moon will interfere with the visibility of these meteors, which under ideal conditions (which we don't have this year) might be expected to produce about 18 visible meteors per hour. On the morning of April 22, the Moon will set about 30 minutes before any sign of dawn begins to show in the east – at 4:07 a.m. and 4:44 a.m. EDT, respectively – so there will only be a short window without light interference.

Saturday evening, April 24, 2021, will be the first evening that the planet Mercury will join Venus just barely above the horizon in the west-northwest 30 minutes after sunset (an approximation of when Mercury will start becoming visible in the evening sky).