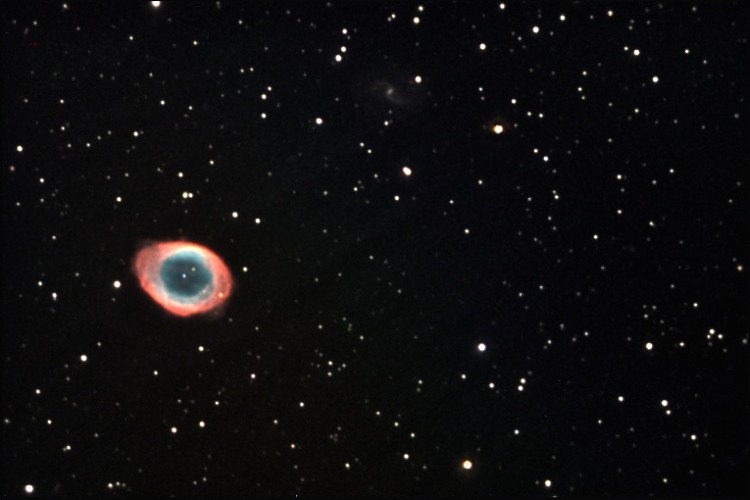 M57 (NGC 6720 - the Ring Nebula) is a planetary nebula -- the glowing remains of a sun-like star. The tiny white dot in the center of the nebula is the star’s hot core, called a white dwarf. M57 is about 2000 light-years away in the constellation Lyra, and is best observed during August. Discovered by the French astronomer Antoine Darquier de Pellepoix in 1779, the Ring Nebula has an apparent magnitude of 8.8 and can be spotted with moderately sized telescopes. M57 is tilted toward Earth so that astronomers see the ring face-on. Astronomers have determined that the nebula’s shape is more complicated than initially thought. The blue gas in the nebula’s center is actually a football-shaped structure seen end-on that pierces the red, doughnut-shaped material. The inner rim of the ring displays an intricate structure of dark, irregular knots of dense gas that the stellar winds have not yet been able to blow away. The knots and their tails look like spokes in a bicycle. [Video and Content Credits: NASA, the Office of Public Outreach – Space Telescope Science Institute (STScI), JPL – Caltech, Preston Dyches, Christopher Harris, and Lisa Poje] [Image Credit: Danny Flippo, Astromart supporter. https://astromart.com/gallery/photo/16487 )

Welcome to the night sky report for August 2022 -- Your guide to the constellations, deep sky objects, planets, and celestial events that are observable during the month. The daily parade of four naked-eye planets in the mornings comes to an end this month. But there are still lots of great highlights, especially if you have access to binoculars. Plus, Saturn and Jupiter are returning to nighttime skies. In August, a flock of star-studded figures soars overhead. Look for the constellation Lyra, shaped as a small parallelogram, which points to Epsilon Lyrae and the Ring Nebula. You can also spot three bright summer stars: Vega, Deneb, and Altair, which form the Summer Triangle. And August is a great month to learn an easy-to-spot constellation – Cygnus the swan. The outlook for the Perseid meteors isn't great due to a full moon on the peak night of August 12, but still it's worth keeping an eye out for early Perseids after midnight the week before. The night sky is truly a celestial showcase. Get outside and explore its wonders from your own backyard.

The morning planet parade we've been enjoying the past few months comes to an end in August, with Venus and Saturn making their exits on opposite sides of the sky. But that still leaves Mars and Jupiter high overhead to enjoy.

In fact, August begins with a close conjunction of the Red Planet and distant ice giant planet Uranus. Uranus can be difficult to find without a self-guided telescope, but it's an easy object for binoculars if you know where to look. And on the 1st, you'll find the tiny, bluish disc of Uranus just northwest of Mars in the morning sky. They'll easily fit within the same field of view through binoculars.

Moving on to the morning of the 15th, you'll find the Moon only a finger's width from Jupiter. Like Mars and Uranus, they'll make a great pairing through binoculars, and you'll also likely catch a glimpse of Jupiter's four largest moons.

The Moon then works its way eastward, to join Mars on August 19th. This is another nice pairing for binoculars, plus you'll find the pair super close to the Pleiades – you may even be able to fit them all into the same view.

Moving to the evening sky, Saturn is transitioning from a late night and early morning object to an all-night sight. It's rising as night falls in August. Look low in the east around 9 p.m. to find it as a steady, yellowish point of light. You'll find that the Ringed Planet rises a bit earlier each night over the course of the month.

Saturn's at opposition this month, meaning it's directly on the opposite side of Earth from the Sun. It's around this time when the Ringed Planet appears its biggest and brightest for the year.

By the end of the month, you'll start to notice Jupiter rising around 9:00 PM to join Saturn.

The warm August nights offer fine opportunities for stargazing, as a flock of star-studded figures soars overhead. In the southeast lies Vega, one of the brightest stars in the sky. The Greeks made Vega the anchor of the small constellation Lyra, the lyre of Orpheus. Lyra’s main pattern is a small parallelogram that marks the strings of the instrument.

Alongside Lyra sits Epsilon Lyrae, also known as a Double Double, a point of light consisting of two orbiting pairs of white stars.

Between the bottom two stars of the parallelogram is the Ring Nebula. NASA’s Hubble Space Telescope reveals stunning details of this planetary nebula, a glowing shell of gas expelled by a dying star. The remnant core of the star -- now a small, hot white dwarf -- sits in the center of the shell, providing radiant energy that makes the gas glow. Our own sun may end its life this way in about 6 billion years.

To the east of Lyra we find a second bright star: Deneb, a distant blue-white supergiant. Deneb marks the tail of Cygnus the swan. Cygnus is flying high in the eastern sky after dark in August. Cygnus has an overall shape like a T or cross, and contains a star pattern sometimes called "the Northern Cross."

Cygnus is anchored by its brightest star, Deneb, which represents the swan's tail. Deneb is the northernmost of the three stars in the Summer Triangle, and it's visible even in bright city skies. On the other end of Cygnus from Deneb is double star Albireo, which is a stargazing favorite, as it shows beautiful blue and gold colors through even the most modest telescope.

Cygnus lies right along the plane of the Milky Way, so it's dense with glittering stars and dark dust clouds, with lots of interest for telescope observers and astrophotographers to enjoy, including the North America Nebula, the Veil Nebula, and the Blinking Planetary Nebula. It also includes the open star clusters M29 and M39, which are visible with binoculars.

However you're observing the sky where you live, August is a great time to discover the constellation Cygnus, the graceful swan soaring across the dusty lanes of the Milky Way.

Just south of the head of Cygnus lies a small pattern called Vulpecula, the fox. Vulpecula hosts the Dumbbell Nebula, another planetary nebula. The Spitzer Space Telescope’s infrared view shows the expanding cloud of gas heated by the central remnant star—now a white dwarf. Astronomers think that the dumbbell shape of this nebula could be caused by the presence of a second star at the center. Eventually the expelled gas of the nebula will dissipate into surrounding space, leaving only the white dwarf and its possible companion behind.

To the south of Lyra and Cygnus lies another bright star of summer: Altair. Altair marks the neck of Aquila the eagle. Just off the end of Aquila’s outstretched tail lies an open star cluster. Known as the Wild Duck Cluster, early observers thought it resembled a flock of ducks flying in a roughly V-shaped formation.

The Perseid meteors are an annual event many of us skywatchers look forward to, as they often produce lots of shooting stars to enjoy. Unfortunately, this year all but the brightest Perseids will be washed out by a full moon on the peak night of August 12.

So, this is probably not the year to make a special trip in order to see the Perseids, but, if you find yourself outside between midnight and dawn on Aug. 13th, don't forget to look up anyway. Because you never know – you might just catch one of the bright Perseid meteors that defies the glare of the Moon. And don't forget the occasional early Perseid can streak across the sky as much as a week beforehand.