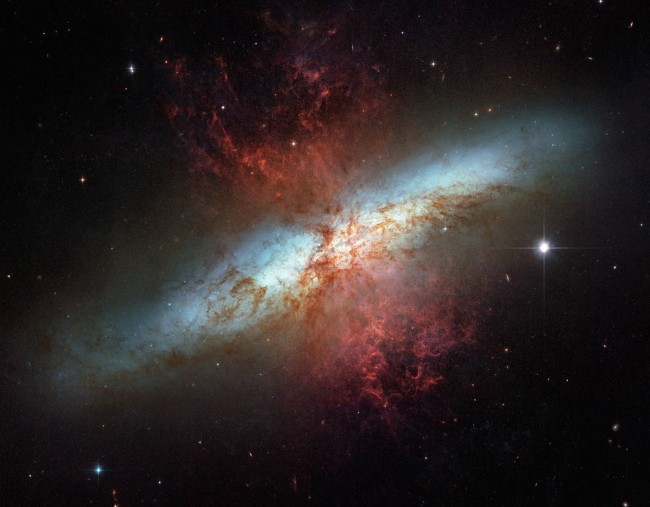 M82 (NGC 3034, the Cigar Galaxy) shines brightly at infrared wavelengths and is remarkable for its star formation activity. The Cigar Galaxy experiences gravitational interactions with its galactic neighbor, M81 (NGC 3031, Bode’s Galaxy) causing it to have an extraordinarily high rate of star formation — a starburst. Around the galaxy’s center, young stars are being born 10 times faster than they are inside our own Milky Way galaxy. Radiation and energetic particles from these newborn stars carve into the surrounding gas, and the resulting galactic wind compresses enough gas to make millions of more stars. The rapid rate of star formation in this galaxy eventually will be self-limiting. When star formation becomes too vigorous, it will consume or destroy the material needed to make more stars. The starburst will then subside, probably in a few tens of millions of years. M82 was discovered, along with its neighbor M81, by the German astronomer Johann Elert Bode in 1774. Located 12 million lightyears from Earth in the constellation Ursa Major, M82 has an apparent magnitude of 8.4. This stunning Hubble image of M82 was assembled using observations at different wavelengths. The red in the image represents hydrogen and infrared light, indicating starburst activity. The blue and greenish-yellow colors represent visible wavelengths of light. [Credits: NASA, JPL – Caltech, and the Office of Public Outreach – STScI] [Image Credit: NASA, ESA, the Hubble Heritage Team (STScI/AURA), J. Gallagher (University of Wisconsin), M. Mountain (STScI), and P. Puxley (National Science Foundation)]

Welcome to the night sky report for December 2019 -- Your guide to the constellations, deep sky objects, planets, and celestial events that are observable during the month. Step outside on a cold December night when the stars shine bright to find the Big Dipper, Cassiopeia, and Cepheus. They will help you locate Eta Cassiopeiae (a binary star system), M103 (a fan-shaped open star cluster of about 170 stars), and Mu Cephei (a red giant variable star known as the Garnet Star). Also, look for beautiful pairings of Venus, Saturn, Mars, and the crescent Moon throughout the month, at sunrise and sunset. The night sky is truly a celestial showcase. Get outside and explore its wonders from your own backyard.

Venus, Saturn, the crescent Moon and Mars make close passes at dusk and dawn throughout the month. When two or more stars or planets appear to come close together in the sky, it's often referred to as a conjunction. By "close" we mean objects separated by no more than a few degrees, or a few finger widths. This is an informal use of the term conjunction. Technically, a conjunction occurs when two objects have the same right ascension.

Since the stars are fixed and don't move appreciably, it's the monthly wanderings of the planets and the Moon that create these occasional groupings in the sky. Since the Moon orbits Earth every month, groupings of the Moon and one or more bright stars and planets are the most common sort of conjunction. They also occur between the Moon or planets and clusters of stars, like the Pleiades.

It's worth noting that some of the motion of the planets in the sky is due to Earth's own motion around the Sun rather than the planets' motions themselves.

On December 1st, Jupiter, Venus, Saturn and the crescent Moon form a lineup at dusk. You'll need a pretty clear view toward the horizon to see Jupiter, which is setting soon after the Sun these days. Look for an un-obscured view toward the southwest about half an hour after sunset.

In the middle of December, watch each evening from December 9th through December 13th, as Venus and Saturn just skim past each other, with brilliant, cloud-swaddled planet Venus rising higher in the sky each day.

Early risers can catch a glimpse of Mars being visited by the slim crescent of the Moon on December 22nd and 23rd. To see them, look toward the southeast about 45 minutes before sunrise. You'll see the Moon above Mars on the 22nd. By the 23rd, it's moved below Mars and a bit toward the east.

At the end of December, you won't want to miss a dazzling pair-up of Venus and the crescent Moon. On the December 28th, look low in the southwest sky at dusk to find Venus hovering in twilight just above a slim lunar crescent.

The long, frosty nights of December make for good sky gazing when the stars shine clear and bright.

Face north to find the Big Dipper scraping the northern horizon. The constellation of Cassiopeia the queen swings high on the other side of Polaris, the North Star. The queen’s star pattern forms a clear “W” or “M” shape in the sky. Snuggled in the M pattern is Eta Cassiopeiae, a binary with a pale yellow Sun-sized star and a less massive orange companion.

Also tucked within the M pattern is the open star cluster M103. Binoculars or a small telescope show a fan-shaped group of about 170 stars, with a red giant star near the center.

To one side of the house’s base sits NGC 6946, a ragged spiral galaxy that appears as a ghostly patch of light in modest telescopes. NGC 6946 is known as the Fireworks Galaxy because of the frequency of supernovas occurring within it -- 10 within the past century. By comparison, the larger Milky Way averages just two per century. X-ray emissions reveal a galaxy filled with remnants of supernovas, whose energy contributes to heating surrounding gas.

To the west of Cassiopeia we find the sprawling pattern of Perseus, the Greek hero and slayer of Medusa, whose head he carries. Among the Perseus stars lies the open star cluster M34. Small telescopes or binoculars show a concentrated scatter of about 100 stars.