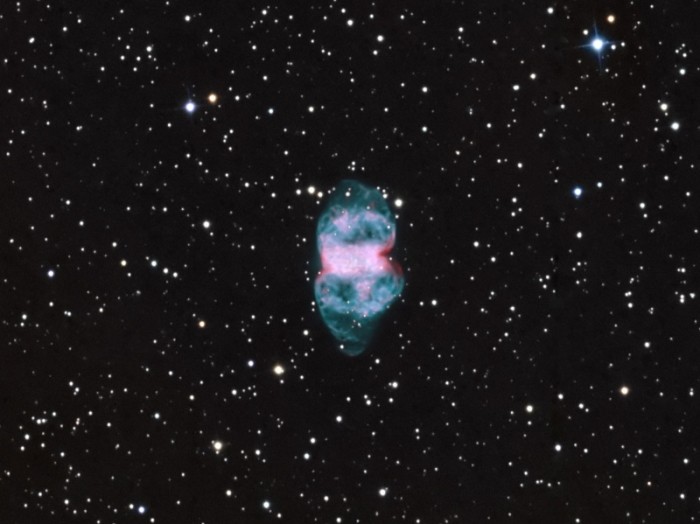 Also known by the popular name the "Little Dumbbell Nebula," M76 or NGC 650, is one of the fainter objects listed in Charles Messier's 18th century Catalog of Nebulae and Star Clusters. Like its better-known namesake M27 (the Dumbbell Nebula), M76 is recognized as a planetary nebula - a gaseous shroud cast off by a dying sunlike star. The nebula itself is thought to be shaped more like a donut, its central box-like appearance due to our nearly edge-on view. Gas expanding more rapidly away from the donut hole produces the more extensive, far flung material in this remarkable image that uses narrow-band filters to highlight the emission from hydrogen (in red) and oxygen atoms (in greenish blue). In particular, complex oxygen emission features are seen above and below the main nebula to a degree not detected in most images of M76. Distance estimates place M76 about 3 to 5 thousand light-years away toward the constellation Perseus, making the nebula over a light-year in diameter. [Video and Content Credits: NASA, the Office of Public Outreach – Space Telescope Science Institute (STScI), JPL – Caltech, Preston Dyches, Christopher Harris, and Lisa Poje] [Image Credit: NASA, Don Goldman].

Welcome to the night sky report for December 2021 -- Your guide to the constellations, deep sky objects, planets, and celestial events that are observable during the month. Step outside on a cold December night when the stars shine bright to find the Big Dipper, Cassiopeia, and Cepheus. They will help you locate a binary star system (Eta Cassiopeiae), a fan-shaped open star cluster (M103 or NGC 581), and a variable star (Mu Cephei). See three planets after sunset, and then say goodbye to Venus as the "Evening Star" at the end of the month. Hunt for newly discovered Comet Leonard in the early morning through mid-month. Finally, get up early on December 14th to watch for Geminid meteors after local moonset, around 2:00 AM. The night sky is truly a celestial showcase. Get outside and explore its wonders from your own backyard.

The constellation of Cassiopeia the queen swings high on the other side of Polaris, the North Star. The queen’s star pattern forms a clear “W” or “M” shape in the sky. Snuggled in the M pattern is Eta Cassiopeiae, a binary with a pale yellow Sun-sized star and a less massive orange companion.

Also tucked within the M pattern is the open star cluster M103 or NGC 581. Binoculars or a small telescope show a fan-shaped group of about 170 stars, with a red giant star near the center.

To one side of the house’s base sits NGC 6946, a ragged spiral galaxy that appears as a ghostly patch of light in modest telescopes. NGC 6946 is known as the Fireworks Galaxy because of the frequency of supernovas occurring within it -- ten within the past century. By comparison, the larger Milky Way averages just two per century.

To the west of Cassiopeia we find the sprawling pattern of Perseus, the Greek hero and slayer of

Medusa, whose head he carries. Among Perseus’ stars lies the open star cluster M34. Small telescopes or binoculars show a concentrated scatter of about 100 stars.

On December 6th through the 10th, look westward following sunset for the Moon visiting Venus, Saturn, and Jupiter in turn. The Moon's crescent fills out as it appears higher in the sky each evening over the course of the week.

Enjoy the view of dazzling Venus as the "Evening Star" while it lasts, though. Our cloud-covered neighbor planet will sink ever closer to the horizon during the month, disappearing for most of us by New Years Day. It'll reappear in late January as a morning planet preceding the sunrise and won't be back in evening skies until December of next year.

Next in December, there's a recently discovered comet on its way into the inner solar system that might be worth trying to observe. It's known as Comet Leonard, and it will be at its closest to Earth on December 12th, just a couple of weeks before it reaches its closest distance from the Sun.

Comets are notoriously difficult to predict in terms of brightness and visibility. Comet Leonard is predicted to peak at a brightness that will probably require binoculars to spot it. There's a chance it could be bright enough to see with the unaided eye, but again, with comets, you really never know.

In the first couple of weeks of December, Comet Leonard can be found in the east before sunrise, passing between Arcturus and the handle of the Big Dipper. It approaches the horizon right around the time of its closest approach to Earth, meaning it'll likely be brighter but more challenging to observe. It then switches over to being an evening object after around Dec. 14th, for just a little while after the Sun sets – as it begins its long haul outward from the Sun again, progressively fading in brightness.

Finally, the Geminid meteors are a highlight of December skies each year. This year's meteor shower peaks overnight on December 13th and 14th. Apart from the weather, the phase of the Moon is usually the main factor in whether a meteor shower will have good viewing any given year. This year, the Moon will be almost 80 percent full at the peak of the Geminids, which isn't ideal. However, that bright Moon will set somewhere around 2:00 AM wherever you're located, leaving a couple of hours for meteor watching before dawn.

The meteors appear to radiate from the constellation Gemini, which you'll find high in the west. While most annual meteor showers are caused by Earth passing through trails of dust-sized particles of comet debris, the Geminids are one of the few meteor showers that are caused by debris from an asteroid that crosses Earth's orbit – in this case, one called Phaethon.

Recently, NASA scientists shared findings that suggest the difference between an asteroid and a comet might be less clear than we realized, with fizzing sodium on Phaethon playing the same role as vaporizing ice on comets.