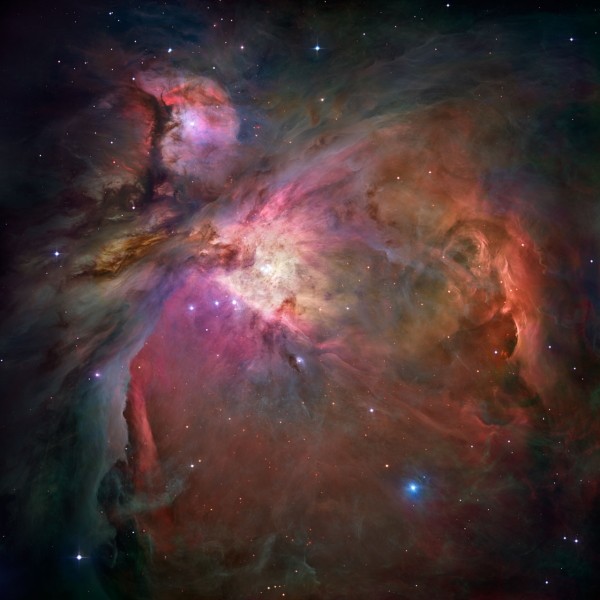 Believed to be the cosmic fire of creation by the Maya of Mesoamerica, M42 blazes brightly in the constellation Orion. Popularly called the Orion Nebula, this stellar nursery has been known to many different cultures throughout human history. The nebula is only 1500 light-years away, making it the closest large star-forming region to Earth and giving it a relatively bright apparent magnitude of 4. Because of its brightness and prominent location just below Orion’s belt, M42 can be spotted with the naked eye, while offering an excellent peek at stellar birth for those with telescopes. This stunning Hubble image offers the sharpest view of the Orion Nebula ever obtained. Created using 520 different Hubble exposures taken in multiple wavelengths of light, this mosaic contains over one billion pixels. Hubble imaged most of the nebula, but ground-based images were used to fill in the gaps in its observations. The orange color in the image can be attributed to hydrogen, green represents oxygen, and the red represents both sulfur and observations made in infrared light. [Video and Content Credits: NASA, the Office of Public Outreach – Space Telescope Science Institute (STScI), JPL – Caltech, Preston Dyches, Christopher Harris, and Lisa Poje] [Image Credit: NASA, ESA, M. Robberto (Space Telescope Science Institute/ESA) and the Hubble Space Telescope Orion Treasury Project Team].

Welcome to the night sky report for February 2022 -- Your guide to the constellations, deep sky objects, planets, and celestial events that are observable during the month. In February, the Winter Triangle is your guide to the night sky. The northern hemisphere is treated to views of the stars Procyon, Sirius, and Betelgeuse, as well as awe-inspiring views of the Orion Nebula, sculpted by the stellar winds of central bright stars. Jupiter is the lone planet lingering in twilight skies after sunset in February. It exits the evening sky this month leaving no bright planets there until August (save for a brief appearance from Mercury in April). Also Venus is at peak brightness for the year in the mornings, and it's a great time to view the Orion Nebula.

With the departure of Saturn and Venus over the past two months, Jupiter is the only bright planet left in our twilight skies in February, and it's on its way out. The giant planet stands alone, low in the western sky after sunset in February. By mid-month, it's setting only about an hour after the Sun. Once Jupiter departs at the end of February, the post-sunset sky will be essentially devoid of naked-eye planets until August, when Saturn will start rising in the east around sunset. (There's a short period, though, in April and May when you might be able to spot Mercury as it pops briefly above the horizon.)

You'd have to go back four years, to March of 2018, to find twilight skies with no bright planets. Catch Jupiter before it's gone. And look for it to become a morning planet in April.

For the morning skies, the planet Venus will be at its brightest for the year in February, around mid-month. It rises with Mars around 4:00 AM and is visible low in the southeast until sunrise. Venus is the brightest of all the planets in our solar system because of the highly reflective clouds that completely cover its globe.

But its brightness in our skies varies, depending on how far it is from Earth and on its phase. Venus is brightest not when it's closest to Earth, but when it's almost at its closest and still shows us a large, bright crescent phase.

So enjoy the crescent Venus that is the planet at its brightest. And look for Venus to form a trio with the Moon and Mars on the morning of February 26th.

The brightly starred winter sky beckons on clear, cold nights of February. Orion, the hunter of Greek mythology, dominates the heavens with a bright belt of three stars. The hunter’s shoulder is marked by the red supergiant Betelgeuse, a massive star nearing the end of its life.

Betelgeuse is roughly 1000 times the size of our sun. An image from NASA’s Hubble Space Telescope shows its huge atmosphere with an enormous, mysterious spot, glowing brightly in ultraviolet light. Hubble’s sharp vision allows astronomers to monitor features of the star’s atmosphere and better understand how it changes over time.

Marking Orion’s foot is another bright, hot supergiant: blue-white Rigel. Massive stars like Rigel lead short, brilliant lives. Below Orion’s shining belt lies the Orion Nebula, a hazy spot to the naked eye. A small telescope reveals it to be a diffuse, glowing cloud in space, illuminated by the energy of bright, hot stars in its center.

February is a perfect time to enjoy the Great Nebula in Orion. The Orion Nebula is an enormous cloud of gas and dust where thousands of stars are being born. In fact, it's the nearest large star-forming region to our solar system, at around 1,500 light-years away. The bright, central region of the Orion nebula is a giant cavity in the cloud being carved out by the intense ultraviolet light from a handful of extremely massive young stars.

Finding the Orion Nebula is easy on February nights, as the constellation Orion will be high in the south around 8 or 9 p.m. Look for the three stars of the hunter's belt, and then find the stars that hang below it forming Orion's sword. In the center of this line of stars is one that looks kind of fuzzy. That's the nebula. It's visible to the unaided eye under relatively dark skies, and is easily seen with binoculars as a faint haze. And through a telescope, it's a sight you'll never forget.

NASA’s Hubble and Spitzer space telescopes reveal the nebula in festoons of glowing gas and dust,  sculpted by the stellar winds of central bright stars. The Orion Nebula is an immense stellar nursery, filled with hot young stars that glow brightly in X-ray light detected by NASA’s Chandra X-ray Observatory.

Follow the belt of Orion down and left to find blue-white Sirius, the brightest star in the night sky. Sirius lies in the constellation Canis Major, the Great Dog and companion to Orion. Sirius is also one of the nearest stars—just 8.6 light-years away—and has a faint white dwarf companion star.

Just below Sirius lies a star cluster called M41. It is easily seen with a pair of binoculars as a scattered twinkling. M41 consists of about 100 stars that formed together from a giant cloud of gas and dust.

Above and left of Sirius is another bright star, a yellowish giant named Procyon. Procyon is part of the constellation Canis Minor, the smaller dog and Orion’s second companion. Procyon, Sirius, and Betelgeuse form a geometrical pattern called the Winter Triangle.