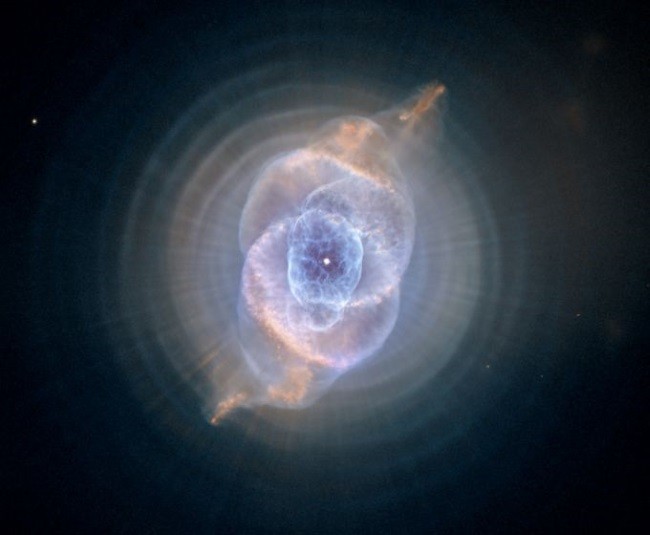 Staring across interstellar space, the alluring Cat's Eye nebula lies three thousand light-years from Earth. The Cat's Eye Nebula was one of the first planetary nebulae to be discovered, yet it remains one of the most complex in structure. A classic planetary nebula, the Cat's Eye (NGC 6543) represents the final, brief phase in the life of a Sun-like star. This nebula's dying central star is believed to have produced the simple, outer pattern of dusty concentric shells by shrugging off outer layers in a series of regular convulsions. But the formation of the beautiful, more complex inner structures is not well understood. Seen so clearly in this sharp Hubble Space Telescope image, the truly cosmic eye is over half a light-year across. Gazing into the Cat's Eye, astronomers may well be seeing the fate of our Sun, destined to enter its own planetary nebula phase of evolution in about 5 billion years. (Credits: NASA, JPL – Caltech, and the Office of Public Outreach – STScI) (Image Credit: NASA, ESA, HEIC, and the Hubble Heritage Team - STScI/AURA).

Welcome to the night sky report for June 2019 -- Your guide to the constellations, deep sky objects, planets, and celestial events that are observable during the month. Though the nights are shorter in June, they are filled with fine sights. Look for the Hercules constellation, which will lead you to a globular star cluster with hundreds of thousands of densely packed stars. You can also spot Draco the dragon, which will point you to the Cat’s Eye Nebula. Jupiter is at its biggest and brightest this month, rising at dusk and remaining visible all night. The night sky is truly a celestial showcase. Get outside and explore its wonders from your own backyard.

The balmy nights of June are short, but filled with fine sights for the backyard stargazer. Look for the Big Dipper riding high in the northwest. It's handle points toward Arcturus - the fourth brightest star in the night sky.

Arcturus is part of the constellation Bootes the herdsman. Bootes also contains a double star called Epsilon Bootes or Izar. The striking pair of stars appears yellow orange and bluish in a modest telescope.

To the left of Bootes sits a semicircle of stars known as Corona Borealis, the Northern Crown. Next to Corona Borealis, we find the dim constellation of a bright hero, Hercules the strong man

Near the center of the constellation Hercules is a trapezoid known as the Keystone. The Keystone is essential to finding the great star cluster in Hercules, a globular star cluster containing hundreds of thousands of densely packed stars.

Globular star clusters contain among the oldest stars in our galaxy. All of the stars within a globular cluster formed around the same time. With NASA's Hubble Space Telescope we can observe these old stars individually and compare how stars of different masses change as they age.

Just outside the Keystone sits another globular cluster M92. M92 is more distant than the Hercules Cluster and looks smaller and fainter through a telescope. An image from Hubble shows many bright, old red giant stars in its crowded core.

North of Hercules, breathing fire on his feet, is Draco the dragon. Draco's long body curls around the Little Dipper. Located along the dragon’s coils is NGC 6543, the Cat's Eye nebula, a cloud of expanding glowing gas from a dying star. NASA's Hubble and Chandra Space Telescope's bring the Cat's Eye into detailed view.

During June, Jupiter is up all night, Mercury and Mars decide to get close, and the Moon reveals its tilted orbit.

Jupiter is at its biggest and brightest this month, rising at dusk and remaining visible all night. The solar system's largest planet is a brilliant jewel to the naked eye, but looks fantastic through binoculars or a small telescope, which will allow you to spot the four largest moons, and maybe even glimpse a hint of the banded clouds that encircle the planet.

Jupiter reaches opposition on June 10th. The term “opposition” refers to the yearly occurrence when Jupiter, Earth, and the Sun are arranged in a straight line, with Earth in the middle. It's the best time of the year to see Jupiter, as the planet is visible in the sky all night and it's around the time when Jupiter is closest to Earth. Although opposition takes place on a specific date, the entire month or so around opposition is an equally good time to observe the planet and its four largest moons.

In mid-June, Mars and Mercury appear ultra-close together immediately after sunset for two days, on June 17th and 18th. You'll need a pretty clear view of the western horizon to catch them, as the pair will be only a few degrees above the horizon (and the farther north you are, the lower they'll be). But it should be spectacular if you can manage it.

In the middle of the month, from about June 14th to the 19th, look for the Moon to form a beautiful lineup in the sky with Jupiter and Saturn that changes each night as the Moon moves in its orbit around Earth.

While you're out marveling this trio, there's a really neat astronomy observation you can attempt yourself, just by paying attention to the Moon's movement from night to night.

If you can  imagine a line passing through Jupiter and Saturn, this more or less represents the plane in which Earth and the other planets orbit the Sun. Think of it as a big disk, and you're looking out to the edge of the disk from within it.

Look closely and you can see that the Moon doesn't move along the same line. From night to night it moves along its own path, crossing the Jupiter-Saturn line as it moves between the two giant planets on June 18th. This separate path shows that the Moon's orbit is slightly tilted with respect to Earth's orbit around the Sun.

This tilt in the Moon’s orbit is why an eclipse is kind of a special event. Eclipses occur when the Moon passes into Earth's shadow, or when Earth passes into the Moon’s shadow.

With the Moon orbiting Earth every month, you might think there would be a lunar and solar eclipse every month as well, with the Sun, Moon, and Earth forming a nice, straight line. But instead, its tilted orbit means the Moon misses this lineup most months, crossing Earth's orbital plane at the right time for a lineup with the Sun only a couple of times a year.

Lunar eclipses don't occur monthly because of the Moon's tilted orbit, but they do tend to happen somewhere on Earth about every 18 months. Solar eclipses have additional factors affecting their seeming rarity, though. While the full Moon in a lunar eclipse can be seen from most anywhere on Earth's night side, solar eclipses tend to have more limited visibility. This is because the Moon's shadow only sweeps across a fairly small area of Earth's surface during a solar eclipse, meaning the region of totality (where the Sun appears completely obscured by the Moon) is not very large. Additionally, most of Earth is covered by water, so lots of solar eclipses are only visible at sea. In addition, many solar eclipses are not total. Rather, many are partial (where the Moon just grazes the Sun) or annular (where the Moon appears smaller than the Sun and leaves a ring of Sun visible).