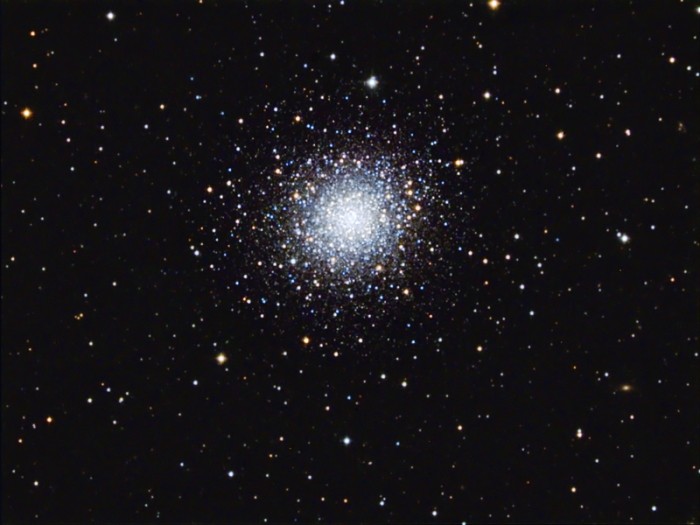 M92 is located 27,000 light-years from Earth in the constellation Hercules, this globular cluster — a ball of stars that orbits our galaxy’s core like a satellite — was first discovered by the German astronomer Johann Elert Bode in 1777. With an apparent magnitude of 6.3, M92 is one of the brightest globular clusters in the Milky Way and is visible to the naked eye under good observing conditions. The cluster is very tightly packed with stars, containing roughly 330,000 stars in total. As is characteristic of ancient globular clusters — of which M92 is one of the oldest — the predominant elements within M92 are hydrogen and helium, with only traces of others, so it belongs to a group of metal-poor clusters. To astronomers, metals are all elements heavier than hydrogen and helium. [Video and Content Credits: NASA, the Office of Public Outreach – Space Telescope Science Institute (STScI), JPL – Caltech, Preston Dyches, Christopher Harris, and Lisa Poje] [Image Credit: Jason Boyce, Astromart supporter].

Welcome to the night sky report for June 2022 -- Your guide to the constellations, deep sky objects, planets, and celestial events that are observable during the month. Though the nights are shorter in June, they are filled with fine sights. Look for the Hercules constellation, which will lead you to a globular star cluster with hundreds of thousands of densely packed stars. Globular cluster M13 (the Hercules Cluster, NGC 6205) is best observed with a telescope, but binoculars will reveal it as a fuzzy spot. You can also spot Draco the dragon, which will point you to the Cat’s Eye Nebula (C6, NGC 6543). The morning quartet of Jupiter, Saturn, Venus, and Mars continues to shine, though they will spread farther apart over the next couple of months. And the constellation Lyra is easily located thanks to its brightest star, Vega.

The balmy nights of June are short, but filled with fine sights for the backyard stargazer. Look for the Big Dipper riding high in the northwest. Its handle points toward Arcturus: the fourth-brightest star in the night sky. Arcturus is part of the constellation Bootes, the herdsman.

To the left of Bootes sits a semicircle of stars known as Corona Borealis, the Northern Crown.

Next to Corona Borealis, we find the dim constellation of Hercules, the strongman of Greek mythology. June is an excellent time to observe one of the best-known globular star clusters – M13, also known as the Hercules Cluster. Globular clusters are spherical collections of stars, tightly packed together in their centers. M13 itself contains several hundred thousand stars.

Globular clusters are also extremely old. The stars in M13 are thought to be around 12 billion years old, which is approaching the age of the universe itself. Our home galaxy, the Milky Way, is known to have about 150 globular clusters. They orbit outside the galaxy's disk, traveling tens of thousands of light-years above and below its spiral arms and most of its stars.

The Hercules Cluster is best observed with a telescope, and larger telescopes will allow you to see more of the cluster's stars. But you can also find it with a pair of binoculars, where it'll look like a hazy little spot.

Find M13 in the constellation Hercules, which is high in the east in the first couple of hours after dark in June. First look for the bright stars Vega and Arcturus. Then find the four stars that comprise "the Keystone," which is the pattern making up the central part of Hercules. You'll find M13 about a third of the way between the two stars on the western, or leading, side of the Keystone.

Just outside the Keystone sits another globular cluster: M92 (NGC6341). M92 is more distant than the Hercules Cluster, and looks smaller and fainter through a telescope. An image from Hubble shows many bright, old red giant stars in its crowded core.

North of Hercules, breathing fire on his feet, lays Draco the dragon. Draco’s long body curls around the Little Dipper. Located along the dragon’s coils is NGC 6543—the Cat’s Eye Nebula, a cloud of expanding and glowing gas from a dying star.

On summer evenings, you may notice a curved grouping of stars crawling across the southern sky, among them a brilliant red beacon. This is the constellation Scorpius, the scorpion, and beginning in June, it's the prime time to look for it.

This grouping of stars has been thought of as having the shape of a scorpion going back to ancient times in the Mediterranean and Middle East. In the Greek myth, the scorpion's deadly sting brought down the great hunter Orion, and that's why – the story goes – we find them on opposite sides of the sky today.

This pattern of stars also been seen as part of a great dragon, in China, and the fish hook of the demigod Maui in Hawaii. That fish-hook shape also forms the tail of the scorpion.

That bright, beacon-like star in Scorpius is Antares, which is a huge red giant star and one of the brightest in the sky. It forms the blazing heart of the scorpion. So look toward the south and use Antares as your guide to find the constellation Scorpius.

Finally in June, a quick introduction to the constellation Lyra, one of the smaller constellations that's home to one of the brightest stars. It represents a lyre, or harp, played by the musician Orpheus in Greek mythology. In Arab cultures, as well as ancient Egypt and India, Lyra was seen as an eagle. And the Inca of South America saw it as a llama.

A pair of binoculars will help you see the other stars in Lyra, which form a sort of parallelogram hanging beneath it. It's sometimes described as looking a bit like a diamond ring, with Vega as the diamond.

And that's not the only ring in Lyra. It's also home to the famous Ring Nebula, where a star has blown off most of its outer layers, leaving behind a remnant star known as a white dwarf.

The gathering of four naked-eye planets we've been enjoying in the morning sky for the past few months – including several close conjunctions, is beginning to break up. Over the next few months, Saturn, Mars, Jupiter, and Venus will appear increasingly spread out across the morning sky – so much so that Venus and Saturn will make their exits as morning objects for most observers by September.

Look for this increasingly spaced out planetary precession in June, and note that the crescent moon jumps into the lineup on the morning of the 23rd.