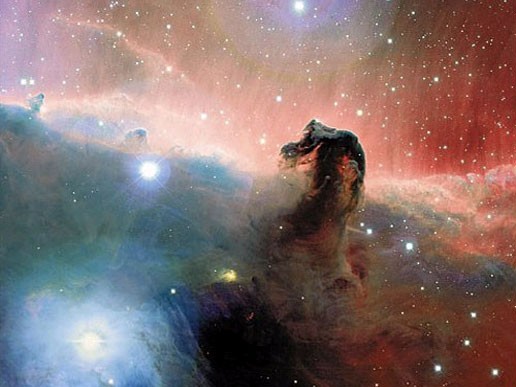 The Horsehead Nebula (IC434), embedded in the vast and complex Orion Nebula roughly 1500 light years away, is one of the most famous nebulae on the sky. It is visible as the dark indentation to the red emission nebula in the center of this image. The horse-head feature is dark because it is really an opaque dust cloud that lies in front of the bright red emission nebula. Like clouds in Earth's atmosphere, this cosmic cloud has assumed a recognizable shape by chance. After many thousands of years, the internal motions of the cloud will surely alter its appearance. The emission nebula's red color is caused by electrons recombining with protons to form hydrogen atoms. [Video and Content Credits: NASA, the Office of Public Outreach – Space Telescope Science Institute (STScI), JPL – Caltech, Preston Dyches, Christopher Harris, and Lisa Poje] [Image Credit: Jean-Charles Cuillandre, Hawaiian Starlight, Canada-France-Hawaii Telescope].

Welcome to the night sky report for March 2022 -- Your guide to the constellations, deep sky objects, planets, and celestial events that are observable during the month. In March, the stars of spring lie eastward. Look for the constellations Gemini and Cancer to spot interesting celestial features like star clusters M35, the Beehive Cluster (M44), and NGC 3923, an oblong elliptical galaxy with an interesting ripple pattern. Find the Y-shaped constellation Taurus, the bull, high in the southwest. The Hyades star cluster forms the bull's face. Look for Saturn to join Venus and Mars in the morning sky around mid-month.

As winter turns into spring, the sky transitions with new starry sights to see. Orion with his shining belt still dominates the evening sky. Just past Orion’s raised arm lies the constellation of Gemini, also known as the Twins. In Greek mythology, the Twins accompanied Jason and the Argonauts on their expedition in search of the Golden Fleece.

The brightest stars in Gemini mark the heads of the twins, Castor and Pollux. Pollux is a yellowish giant swelling as it enters old age, and hosts a Jupiter-sized planet. Castor is a system of three pairs of stars bound in an intricate gravitational dance. At the feet of the Gemini brothers is a fuzzy patch that binoculars or a small telescope show to be a cluster of several hundred stars called M35.

Neighboring Gemini is the faint constellation of Cancer. Within the body of Cancer lies M44, the Beehive cluster, one of the nearest star clusters to Earth. This swarm of stars looks like a cloudy patch to the naked eye, but ground-based telescopes show a pleasing scatter of roughly 1000 stars.

Adjacent to Cancer lurks the head of Hydra, the water snake, the longest constellation in the sky. Distant galaxies like NGC 3923 reside along the snake’s coils. While NGC 3923 appears as a faint smudge in backyard telescopes, more powerful observatories reveal it to be a giant, oblong elliptical galaxy with an interesting ripple pattern.

Near the end of Hydra’s tail lies M83, a closer galaxy with a spiral shape. Also known as the Southern Pinwheel, the galaxy is a swirl of dark dust lanes, blue star clusters, and glowing pink star-forming clouds. An X-ray image reveals details that no human eye could ever see on its own: searing hot gases tracing the spiral arms, black holes and neutron stars emitting X-rays as they gobble up companions, and a core of concentrated black holes and neutron stars, the product of recent star formation.

Saturn joins Venus and Mars this month in the morning sky. Beginning around March 18th or 19th, early risers may notice Saturn steadily moving toward Mars and Venus each day, to form a trio low in the east before sunrise. The crescent moon joins the crowd on the 27th and 28th. Saturn and Mars are headed toward a super-close meeting at the start of April.

Look high in the southwest on March evenings and you'll find the tall, Y-shaped constellation Taurus, the bull. And at the center of Taurus, forming the bull's face, is a grouping of stars known as the Hyades star cluster. It's the closest open star cluster to our solar system, containing hundreds of stars.

An open cluster is a group of stars that are close together in space and loosely bound together by their mutual gravity. These are stars that formed together around the same time, from the same cloud of dust and gas. Over time they blow away that leftover nebula material and drift apart. Because of this and their open, or diffuse, structures, they're called "open" clusters. Our own Sun formed in a cluster like this, and studying these structures helps us understand how stars form and evolve.

Another well-known open cluster is the Pleiades, which is also located in Taurus. The Hyades and the Pleiades are actually about the same size, at about 15 or so light-years across. But the Pleiades is about 3 times farther away, so it appears more compact.

You don't need a telescope to find the Hyades. Look for this V-shaped grouping of stars in Taurus. Use the stars of Orion's belt as a handy pointer, leading you to bright orange Aldebaran. (Aldebaran isn't actually part of the star cluster. It's located halfway to the Hyades, and just happens to be visible in the foreground.)

So check out the Hyades in March, where you'll see a handful of stars with the unaided eye, and more than a hundred with binoculars.

March skies contain several easy-to-find, bright stars that are known to have planets of their own orbiting around them. Locate these distant "suns" for yourself and you'll know you're peering directly at another planetary system.

First is Epsilon Tauri, the right eye of Taurus the bull. This orange dwarf star has a gas giant planet around 8 times the mass of Jupiter. Next is 7 Canis Majoris. This is the star at the heart of the dog constellation that contains blazing bright Sirius. This star is known to have two planets: a gas giant nearly twice the mass of Jupiter and another just a little smaller than Jupiter.

Moving on, we find Tau Geminorum, the star at the heart of Castor – northern-most of the twins in Gemini. Tau Geminorum has a huge gas giant planet 20 times the mass of Jupiter in an orbit only slightly larger than that of Earth. And finally, wheeling around to the north, is Beta Ursae Minoris, the brightest star in the bowl of the Little Dipper. This star has a 6-Jupiter-mass planet in orbit around it.

Researchers believe that most stars have a family of planets orbiting them, because forming planets is a natural part of forming stars. Now you know how to find a few of them yourself, no telescope required.