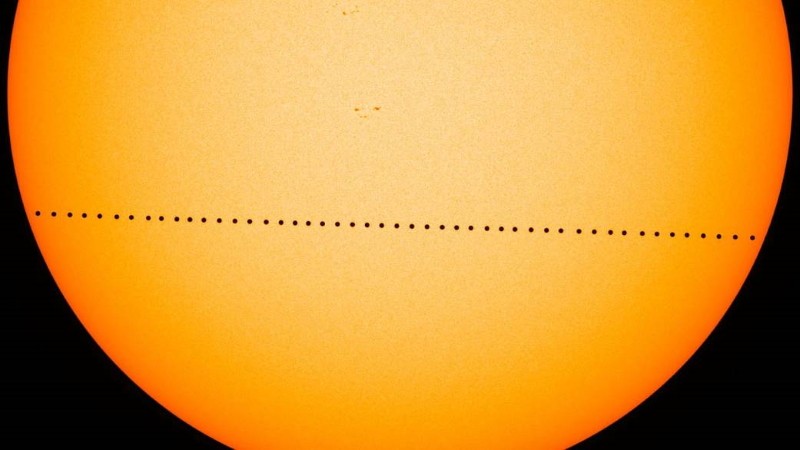 On May 9, 2016, Mercury passed directly between the Sun and Earth, as captured in this image. This event is called a transit. On November 11, 2019, Mercury will once again transit across the face of the Sun and appear as a dark round spot that seems to crawl across the Sun’s surface. Solar transits are much rarer than eclipses of the Moon. The next Mercury transit that will be visible from North America isn't until 2049. As for Venus, the next solar transit will not occur for another century, on December 11, 2117. Not all transits are the same because from Earth’s perspective, the planets cross the Sun at different places, sometimes just grazing the Sun's outer edges. The 2019 Mercury transit is an especially good one because it will pass very close to the Sun’s center, making it a real treat for observers. (Credits: NASA, JPL – Caltech, and the Office of Public Outreach – STScI) (Image Credit: NASA Goddard Space Flight Center, SDO, Genna Duberstein)

Welcome to the night sky report for November 2019 -- Your guide to the constellations, deep sky objects, planets, and celestial events that are observable during the month. In November, hunt for the fainter constellations of fall, including Pisces, Aries, and Triangulum. They will guide you to several galaxies, including the spiral galaxy M74 and M33 (the Triangulum Galaxy). On November 11 we're in for a rare treat, as the innermost planet, Mercury, passes directly in front of the Sun. The event will last about five and a half hours, during which Mercury's path will take it right across the middle of the Sun's disk. The next Mercury transit that will be visible from North America isn't until 2049. (Warning: You should never look directly at the Sun without proper protection, as it can permanently damage your eyes). The night sky is truly a celestial showcase. Get outside and explore its wonders from your own backyard.

Dark, cold nights of November make for good hunting for the fainter constellations of fall.

Pegasus flies high in the southeast after nightfall and is a good guidepost for some of autumn’s dimmer patterns.

Located below the pattern of the eastern fish is the spiral galaxy M74. NASA’s Hubble Space Telescope has rendered it in exquisite detail. M74 is known as a grand design spiral and has two prominent bluish spiral arms wound neatly around the redder galactic nucleus. The nucleus appears redder because there is little new star formation there and many of the hot blue stars have evolved to become red giant stars or have exhausted their fuel altogether.

Above Aries is the constellation of Triangulum. The constellation contains the third-largest galaxy of our Local Group, after the Milky Way and Andromeda galaxies: M33, the Triangulum Galaxy. This galaxy is relatively large and diffuse from our perspective, and can be spotted with binoculars. NASA’s space telescopes have imaged M33’s spiral features in great detail.

On November 11 we're in for a rare treat, as the innermost planet, Mercury, passes directly in front of the Sun for a few hours. This event is called a transit, and for Mercury they happen only about 13 times in a century. (Transits of Venus are even more rare.)

The event will last about five and a half hours, during which Mercury's path will take it right across the middle of the Sun's disk. For observers in the Eastern US, the transit begins after sunrise, meaning you'll be able to view the entire thing. For the central and western US, the transit begins before sunrise, but there's enough time left as the Sun climbs up the sky for you to catch a glimpse before Mercury makes its exit.

Warning: You should never look directly at the Sun without proper protection, as it can permanently damage your eyes.

If you have a pair of eclipse shades, those are typically OK for viewing the Sun, but Mercury is so small in comparison that it is impossible to see a transit without magnification.

Your best bet is a telescope with a certified sun filter, but other options include solar projection boxes and sun funnels. Better yet -- NASA's Solar Dynamics Observatory spacecraft will be sharing near-realtime images during the transit. Whatever method you choose, be safe when observing the Sun.

The next Mercury transit that will be visible in the US isn't until 2049. So if you're in the US, you might want to make the effort to catch this special celestial event.

A more frequent type of transit you might want to check out is the regular dimming and brightening of Algol (the Demon Star).

Found in the constellation Perseus, Algol is actually two stars orbiting each other, and they're oriented nearly edge-on such that from our perspective, the smaller star regularly passes in front of the larger, brighter one, causing it to dim for about 10 hours at a time. This happens like clockwork, every 2 days, 20 hours, 49 minutes. You can find tables of these "minima," as they're called, in lots of astronomy magazines and websites.

To observe Algol's eclipses, find the date and time of a predicted minimum and start observing maybe an hour or two before that time. Take a look about every half hour (binoculars are really useful for this). Over a few hours following the minimum, Algol will slowly brighten back to its normal state.

At its normal brightness, Algol appears about as bright as the nearby star Almach, while at its minimum, it dims to around the brightness of its neighbor Gorgonea Tertia. So these two stars provide a helpful way to compare Algol's brightness throughout the night as you observe.