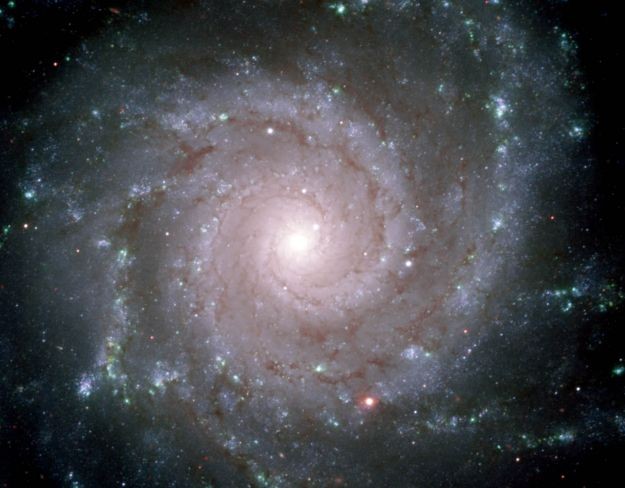 M74 (NGC 628), a perfectly shaped spiral galaxy, is one of the most photogenic galaxies in the night sky. An island universe of about 100 billion stars, 30 million light-years away toward the constellation Pisces, M74 presents a gorgeous face-on view to earthbound astronomers. Classified as an Sc galaxy, the grand design of M74's graceful spiral arms traced by bright blue star clusters and dark cosmic dust lanes, is similar in many respects to our own home galaxy, the Milky Way. Recorded with a 28 million pixel detector array, this impressive image celebrates first light for the Gemini Multi-Object Spectrograph (GMOS), a state-of-the-art instrument at the 8-meter Gemini North telescope. The Gemini North Observatory gazes into the skies above Mauna Kea, Hawaii, USA, while its twin observatory, Gemini South, operates in central Chile. [Video Credits: NASA, JPL – Caltech, and the Office of Public Outreach – STScI] [Image Credit: Gemini Observatory, GMOS Team]

The dark, cold nights of November are a good time to start looking for the Pleiades. This bright cluster of stars is a well-known sight to most stargazers, and is best enjoyed in the cooler fall and winter months in the Northern Hemisphere.

The Pleiades is what's known as an open star cluster – it's a loosely bound grouping of a couple thousand stars that formed together and are slowly drifting apart over time. A handful of the brightest stars in the cluster are visible with the unaided eye, and with binoculars or a telescope, you can see hundreds.

Astronomers estimate the age of the cluster is only about 100 million years. It's located a bit more than 400 light years away. The brightest stars in the Pleiades are many times brighter than our own star, the Sun. In fact, if you were to visit the Pleiades and look homeward, you wouldn't even be able to see the Sun without a small telescope.

On cool November evenings, look for the Pleiades in the east in the couple of hours after dark. The cluster rises to its highest point around midnight. You can also enjoy an early morning view of the Pleiades near the Moon, before dawn on November 2nd.

Pegasus flies high in the southeast after nightfall and is a good guidepost for some of autumn’s dimmer patterns. Look south and east of the Great Square of Pegasus for Pisces, the fish. In Greek legend, the two fish, tied together with a rope, represent Aphrodite and Eros, who transformed themselves to escape a monster.

The sprawling star pattern includes the Circlet, marking the western fish. Located below the pattern of the eastern fish is the spiral galaxy M74 (NGC 628). NASA’s Hubble Space Telescope has rendered it in exquisite detail. M74 is known as a grand design spiral and has two prominent bluish spiral arms wound neatly around the redder galactic nucleus. The nucleus appears redder because there is little new star formation there and many of the hot blue stars have evolved to become red giant stars or have exhausted their fuel altogether. NASA’s Spitzer Space Telescope provides a dramatic view of the infrared light of the galaxy. The pink hues depict dust lanes that punctuate the spiral arms, showing dense cloud regions where new stars can form.

Above Aries is the constellation of Triangulum. The constellation contains the third-largest galaxy of our Local Group, after the Milky Way and Andromeda galaxies: M33, the Triangulum Galaxy. From our perspective, this galaxy is relatively large and diffuse and can be spotted with binoculars. NASA’s space telescopes have imaged the galaxy’s spiral features in great detail. Spitzer’s infrared view shows the distribution of dust in its ragged spiral arms. An ultraviolet image from NASA’s GALEX mission shows emissions from hot stars in its disk. Look for the bright blue and white areas to see where star formation has been extremely active over the past few million years. Patches of yellow and gold are regions where star formation was more active 100 million years ago.

On November 18th and 19th, enjoy a lovely crescent moon near Jupiter and Saturn after sunset. The two planets have been brilliant highlights of the night sky for much of this year, and are now getting closer together in advance of their super close pairing in mid-December. More about that next month, but for now, be sure to watch as they draw a little nearer to each other each week.

You may have marveled at how brightly a full moon can light up a nighttime landscape, but have you noticed how Earth can illuminate the night side of the Moon? This eerily beautiful glow is called Earthshine. It's sunlight that's been reflected off of Earth, then bounced off the Moon and back to our eyes.

Earthshine is easiest to observe in the few days before and after the new moon, when the part of the Moon that's directly lit by the Sun appears as a slim crescent. This is partly because there's less of the bright, sunlit surface to compete with the dimmer Earthshine-lit portion, and partly because the phases of Earth and the Moon are complimentary: when the Moon is a slim crescent in our sky, Earth seen from the Moon looks nearly full.

Occasionally, NASA spacecraft use this phenomenon to make the night side of other planets and moons visible – for example Saturn-shine on Saturn's moons and ring-shine lighting up Saturn itself, as seen by NASA's Cassini spacecraft.

The best times to observe Earthshine in November are on the 17th through the 20th, following sunset, and before dawn on the 9th through the 12th. And for an added treat, on the 12th, the Moon, illuminated by both sunshine and Earthshine, will appear just above the "Morning Star," Venus.

Make an effort to brave the chilly nights and enjoy the constellations, stars, and galaxies of the November sky.