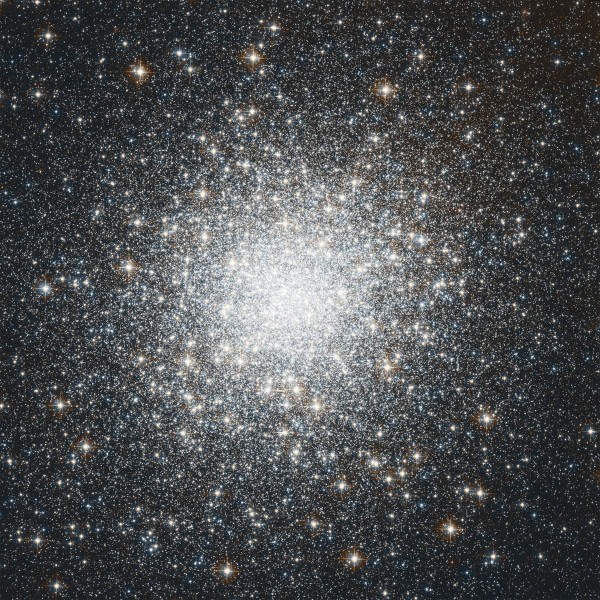 M2 (NGC 7089), the first globular cluster to be added to the Messier catalog, is located roughly 37,000 light-years from Earth in the constellation Aquarius. A globular cluster is a spherical group of stars that are bound together by their mutual gravitational attraction. M2 has a diameter of over 150 light-years and is one of the largest clusters of its kind. It was discovered in 1746 by the French astronomer Jean-Dominique Maraldi while he was observing a comet. This Hubble image of M2’s core was created using observations taken at visible and infrared wavelengths. M2 contains over 150,000 stars. Most of the cluster’s mass is concentrated at its center, with shimmering streams of stars extending outward into space. It has an apparent magnitude of 6.3 and can be seen with the naked eye in ideal viewing conditions. The best time to observe M2 is during the months of September and October. Large telescopes will resolve the cluster’s individual stars. (Credits: NASA, JPL – Caltech, and the Office of Public Outreach – STScI) (Image Credit: NASA, ESA, STScI and A. Sarajedini - University of Florida)

Welcome to the night sky report for September 2019 -- Your guide to the constellations, deep sky objects, planets, and celestial events that are observable during the month. In September, Pegasus becomes increasingly prominent in the southeastern sky, allowing stargazers to locate globular star clusters and a double star, Alpha Capricorni. Look for lovely crescent Moons at the start and end of the month. The September equinox brings the beginning of fall in the Northern Hemisphere. And Mars is at solar conjunction, meaning it has disappeared from night skies. The night sky is truly a celestial showcase. Get outside and explore its wonders from your own backyard.

As September brings transition from summer to fall, the sky transitions to the stars of autumn. Increasingly prominent in the southeastern sky is Pegasus, the winged horse. The Great Square of stars that outlines the body is a useful guide to the fall patterns around it.

Near the Great Square lies the sprawling pattern of Aquarius, the water-bearer. Located within the western part of the constellation is M2, one of the oldest and largest globular star clusters associated with the Milky Way galaxy. It appears as a circular, grainy glow in backyard telescopes.

NASA’s Hubble Space Telescope has imaged the cluster, a compact globe of some 150,000 stars that are more than 37,000 light-years away. At approximately 13 billion years old, this cluster formed early in the history of the universe, and offers scientists an opportunity to see how stars of different masses live and die. Results from ESA’s Gaia satellite suggest that this cluster, along with several others, may have once belonged to a dwarf galaxy that merged with the Milky Way.

The brighter star, Algedi, is about 100 light-years away. The fainter star lies along the same line of sight but is roughly eight times farther away. The pattern hosts another globular star cluster, M30. It appears as a hazy glow in small telescopes.

Stars are packed so closely in globular clusters that they can interact with each other. Binary stars can exchange partners in their tight gravitational square dance. More massive objects like black holes and neutron stars move toward the center. M30 likely started life with another galaxy that merged with our own, since the globular cluster is orbiting the Milky Way in the opposite direction of most stars.

Look west to find the constellation Sagittarius, the centaur archer in the sky. Past the centaur’s arm, you will find another globular star cluster, Terzan 5. Terzan 5 sits near the dark dust lanes of the Milky Way. Bright blue young stars are visible in the foreground of the ancient cluster. The core of Terzan 5 shines brightly with the X-ray light from white dwarfs and neutron stars.

Take advantage of mild, late summer nights to enjoy the constellations and ancient globular star clusters of the September sky, as well as the Moon and planets.

This month, look low in the west about half an hour after sunset to enjoy the crescent moon on September 1st through the 4th, with the Moon appearing a bit higher in the sky each night. By the 5th, the first-quarter (that is, half-full) Moon winds up here, just a couple of degrees to the right of Jupiter.

At the end of the month, from September 23rd to the 27th, look east half an hour before dawn for an increasingly slimmer crescent that appears lower in the sky each day.

As you make your lunar observations, remember that for many thousands of years, the cycles of the Moon and Sun were the basis of human timekeeping. And many traditional cultures still rely on these cycles to mark special events.

A few months ago, it seemed like the Red Planet, Mars, was a constant companion in the evening sky. But as our two planets moved along in their orbits this summer, Mars has drifted further into the glare of the Sun, finally disappearing from our skies altogether in July.

From Earth's point of view, in late August and early September, Mars is more or less behind the Sun. The Sun expels hot, ionized gas from its corona, which extends far into space. This has implications for spacecraft at Mars, like NASA's Insight lander and Curiosity rover. During solar conjunction, this gas can interfere with radio signals when engineers try to communicate with spacecraft orbiting or on the planet surface, corrupting commands and resulting in unexpected behavior from our deep space explorers. To be safe, engineers hold off sending commands when Mars disappears far enough behind the Sun's corona that there's increased risk of radio interference. This event, called solar conjunction, happens about every two years. For those of us eager for a peek at Mars with our own eyes once again, it'll return to our pre-dawn skies in early November.

September 23rd marks the equinox, with day and night being of equal length. This marks the beginning of Fall in the Northern Hemisphere and Spring in the Southern Hemisphere. Although this means it's time to bid farewell to those long summer days, the upshot for stargazers is longer nights, meaning more time to look up!

From the start of the equinox until the winter solstice in December, nights become longer than days. This reduction in the number of hours of sunlight per day is what leads to seasonal cooling we associate with Fall and Winter. Of course, it's the opposite story in the Southern Hemisphere, where the September equinox ushers in the beginning of Spring.