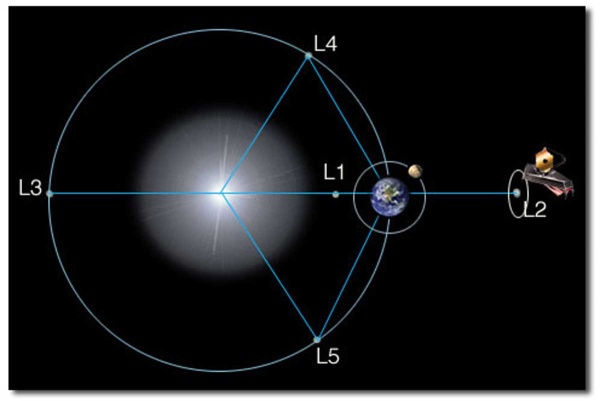 When you ask an astronomer about the James Webb Space Telescope's orbit, they'll tell you something that sounds like it came from a science-fiction novel. The Webb won't be orbiting the Earth –instead we will send it almost a million miles out into space to a place called L2.

L2 is short-hand for the second Lagrange Point, a wonderful accident of gravity and orbital mechanics, and the perfect place to park the Webb telescope in space. There are five so-called "Lagrange Points" - areas where gravity from the sun and Earth balance the orbital motion of a satellite. Putting a spacecraft at any of these points allows it to stay in a fixed position relative to the Earth and sun with a minimal amount of energy needed for course correction.

The term L2 may sound futuristic and mysterious, but the name actually honors a Mathematician born in 1736. The Lagrange points were named after the Italian-born mathematician and astronomer Joseph-Louis Lagrange, who made important contributions to classical and celestial mechanics. Lagrange studied the "three-body problem" (so-called because three bodies are orbiting each other) for the Earth, sun, and moon in 1764, and by 1772 he had found the solution; there are five stable points at which you could put an object and have it stay fixed in place relative to the other two.

In the case of L2, this happens about 930,000 miles away from the Earth in the exact opposite direction from the sun. The Earth, as we know, orbits the sun once every year. Normally, an object almost a million miles farther out from the sun should move more slowly, taking more than a year to complete its orbit around the sun. However, at L2, exactly lined up with both the sun and Earth, the added gravity of the two large bodies pulling in the same direction gives a spacecraft an extra boost of energy, locking it into perfect unison with the Earth's yearly orbit. The Webb telescope will be placed slightly off the true balance point, in a gentle orbit around L2.

"A huge advantage of deep space (like L2) when compared to Earth orbit is that we can radiate the heat away," said Jonathan P. Gardner, the Deputy Senior Project Scientist on the Webb Telescope mission and Chief of the Observational Cosmology Laboratory at NASA's Goddard Space Flight Center in Greenbelt, Md. "Webb works in the infrared, which is heat radiation. To see the infrared light from distant stars and galaxies, the telescope has to be cold. Webb's large sunshield will protect it from both Sunlight and Earthlight, allowing it to cool to 225 degrees below zero Celsius (minus 370 Fahrenheit)." For the sunshield to be effective, Webb will need to be an orbit where the sun and Earth are in about the same direction.

With the sun and the Earth in the same part of the sky, the Webb telescope will enjoy an open, unimpeded view of the universe. In comparison, the Hubble Space Telescope is in low-Earth orbit where it goes in and out of the Earth's shadow every 90 minutes. Hubble's view is blocked by the Earth for part of each orbit, limiting where the telescope can look at any given time.

The Spitzer Space Telescope, another infrared telescope, is in orbit around the sun and drifting away from the Earth. Spitzer is already more than 100 million kilometers (60 million miles) away from the Earth, and eventually its path will take it to the other side of the sun. Once we can no longer communicate with Spitzer that means it is at the end of its mission life.

In contrast, a major perk of parking at L2 is the ease of communications. Essentially, the Webb telescope will always be at the same point in space. "We can have continuous communications with Webb through the Deep Space Network (DSN)," Gardner said. "During routine operations, we will uplink command sequences and downlink data up to twice per day, through the DSN. The observatory can perform a sequence of commands (pointing and observations) autonomously. Typically, we will upload a full week's worth of commands at a time, and make updates daily as needed."

Even before the Webb telescope, L2 has been known to astronomers as a good spot for space-based observatories. There are already several satellites in the L2 orbit, including the Wilkinson Microwave Anisotropy Probe, and the Herschel and Planck space observatories. But there's plenty of room for another neighbor, and the Webb telescope will be heading out to L2 in the near future.