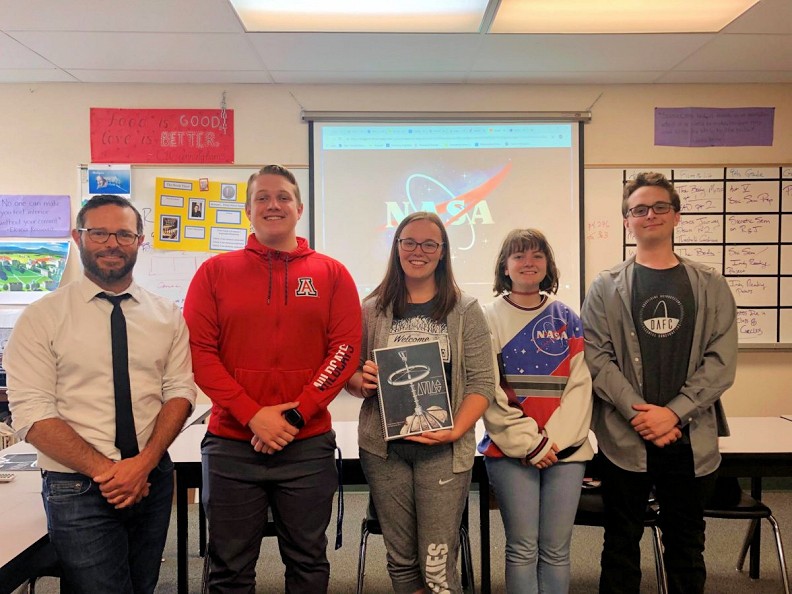 The Friday Harbor High School Aerospace Design Team has just received results from the qualifying round of the International Space Settlement Design Competition. Based on the judges’ evaluation of our work, Friday Harbor produced one of the top four design proposals in North America and are now invited to the World Finals held at NASA’s Kennedy Space Center in late July.

Over two months this winter, The FHHS Aerospace Design Team, known as Island Orbital Technologies, or IOTech, labored over a 40-page design proposal of a space settlement capable of capturing and adjusting the orbit of an asteroid. The design team was led by returning team members Lucy Urbach, Joely Loucks, Arlo Harold, Brandon Payne and Evan Foley, among others.

“I am extremely proud of the focus, determination, and time poured into this proposal. FHHS students put thousands of work-hours into this project and now look forward to presenting their work to the public as well as preparing to compete for a world championship title at NASA,” Daniel Garner, Aerospace Literature and Design teacher, said. “We are grateful to the FHHS Aerospace Design class for their combined contributions as well as the critical evaluation and technical expertise of Mike Loucks, Wade Guidry, Ross Lockwood, and John Carrier. Furthermore, we also grateful for the past support of San Juan Island School District, The Public Schools Foundation, San Juan Island Rotary, and the Lions and Leos clubs of Friday Harbor, without whose support we would not be where we are today.”

This year’s proposed design would not have been possible without the following students:


Principal Fred Woods said, “This is the second year in a row our aerospace team has made it to the world finals. This says much about the quality of our students as well as the dedication of our teacher, Dan Garner. Congratulations to all!”

Editor's Note: This past winter, I arranged a private star party for these young adults and I cannot not tell you how impressed I was with their knowledge and their character. It was a pleasure to get to know them and share some star time. -Paul S. Walsh