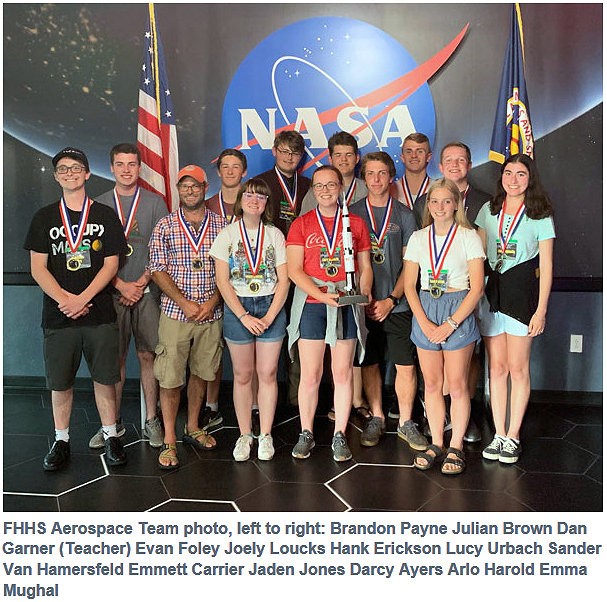 The competition was a 42-hour design challenge. Beginning at 2 pm on Saturday, teams received the RFP from the competition, which asked teams to propose the future construction, operations and maintenance for a settlement of 16,000 on the far side of the lunar surface. The ISSDC slated this scenario to take place in the year 2053, so part of this design competition is predictive, but based on current and projected developments.

On Saturday morning, Rockdonnell elected a number of Friday Harbor students to leadership positions. Notably, Arlo Harold (’20) was elected to be Vice President of Engineering, Joely Loucks (’19) was elected the head of Automations Design, Brandon Payne (’19) was elected head of Operations and Lucy Urbach (’19) took the post of Systems Engineer.

As Saturday progressed, it became clear that Arlo Harold and the Rockdonnell president had created a great team dynamic, providing the vision for the settlement, design time lines and constant oversight of the design process. As the competition continued, Arlo Harold took on more responsibilities and became the driving force for clarity and scheduling, whereas Lucy Urbach created a comprehensive compliance matrix of hundreds of design points that needed to be developed. She then created a schedule for ‘tiger teams’ which addressed design points that bridged multiple departments. Overall she lead 6 tiger teams over the span of Sunday morning and went on to be the main designer behind the 50-slide design brief as well.

The Rockdonnell team continued to work constantly through Sunday and well into Monday morning, with many students going without sleep and was the first corporation to turn in its design proposal (5 minutes before the 7:30 am deadline). Their 50-slide design briefing is the result of an incredible amount of work, collaboration, communication, design, redesign, compromise, ingenuity, and imagination.

The Friday Harbor team took leadership roles throughout their experience, and most importantly, they earned respect from their peers because of their work ethic and genuine kindness.

Teacher Daniel Garner said, “Rarely have I had the pleasure of working with such amazingly good people as the students on this team - the quality of their character showed through as our Friday Harbor students were often the ones providing clarity and exuding calmness. The inevitable engineering and personality conflicts inherent in this process were quickly resolved, highlighted this morning as the proposal was turned in and team members turned and gave each other very tired yet relieved hugs and high fives.”

Team members, their families, Friday Harbor High School and San Juan Island School District would like to thank the following businesses and people for their donations and support for this competition: Valmark, Inc, San Juan Interiors, Soroptimists International, Rotary Club of San Juan Islands, San Juan Lions and Leos Clubs, the Marble family, G. Opatz, and various other people who donated at the open house held this spring.

Principal Fred Woods exclaimed, “World Champs! We are so very proud of our students. It really doesn’t get any bigger than this.”