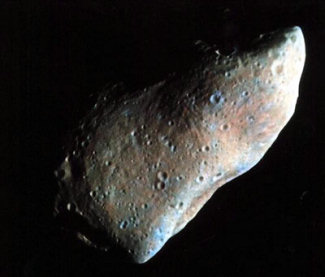 Near-Earth Objects (NEOs) are comets and asteroids that have been nudged by the gravitational attraction of nearby planets into orbits that enter the Earth's neighborhood.

Telescope facilities across the world are watching the skies for these rocky remnants from outer space to determine whether they are on a collision course with Earth. Currently one or two of these so called NEOs are recorded each day, but fortunately the vast majority are the size of a human fist and pose no threat.

Nevertheless, the presence of large impact craters on Earth provides dramatic evidence of past collisions, some of which have been catastrophic for the planet's species. Experts from across Europe and the US met in London this week to consider current and future efforts to monitor NEOs in order to better predict those with Earth impacting trajectories.

Professor Monica Grady, a leading expert on meteorites from the Open University explains, "It's simply a question of when, not if, a NEO collides with the Earth. Many of the smaller objects break up when they reach Earth's atmosphere and have no impact. However, a NEO larger than 1 km will collide with Earth every few hundred thousand years and an NEO larger than 6 km, which could cause a mass extinction, will collide with Earth every hundred million years. And we are overdue for a big one!"

NEO's, remnants from the formation of the inner planets, range in size from 10 metre objects to those in excess of 1 km. It is estimated that 100 fist sized meteorites, fragments of NEO's, fall to Earth on a daily basis but larger objects impact with Earth on a much less regular basis.

Studies of one asteroid (Apophis), which was discovered in June of 2004, have shown that there is a low probability that this object will impact Earth in 2036, as had been widely speculated. This has raised a whole series of issues about the prospect of deflecting the asteroid before a very close approach in 2029. Government's across the world are looking at the issue and in particular at the technologies and methods required to carry out an asteroid deflection manoeuvre in space.

Richard Tremayne-Smith, from the British National Space Centre, heads up the coordination of UK NEO activity and helps provide an international lead on NEO efforts on the issue. He said, "NEO collisions are the only known natural disaster that can be avoided by applying appropriate technology - and so it is the interest of Governments across the World to take interest in this global issue. Here in the UK we take the matter very seriously."

The current method of studying NEOs is achieved through a combination of 3 different methods: the study of meteorites to understand their structure and composition; earth based astronomical observations of asteroids; and space based observations and encounters with asteroids.

"In order to define successful strategies for deflecting asteroids that might collide with Earth, it is essential to understand the material properties such as the composition, strength and porosity of asteroids. By putting together such information with data from both ground based and space based studies we can begin to build an accurate picture of these diverse phenomena."