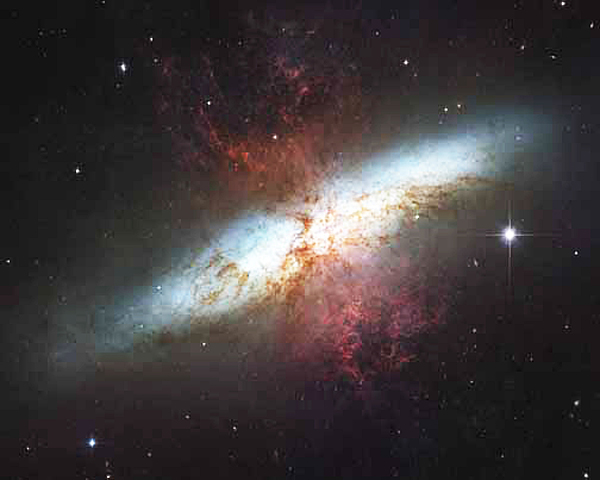 An international collaboration that includes scientists from the University of Delaware's Bartol Research Institute in the Department of Physics and Astronomy has discovered very-high-energy gamma rays in the Cigar Galaxy (M82), a bright galaxy filled with exploding stars 12 million light years from Earth.

The gamma rays observed by the team have energies more than a trillion times higher than the energy of visible light and are the highest-energy photons ever detected from a galaxy undergoing large amounts of star formation.

The discovery was made from data taken over a two-year-long observing campaign by the VERITAS collaboration of more than 100 scientists from 22 different institutions in the United States, Ireland, United Kingdom, and Canada.

The finding provides “strong evidence” that exploding stars are the origin of cosmic rays, according to Jamie Holder, assistant professor of physics and astronomy at the University of Delaware and deputy spokesperson for the VERITAS collaboration.

Produced in violent processes in our own galaxy and beyond, cosmic rays are actually energetic particles that continually bombard Earth's atmosphere. They are important, Holder says, because they make up a large fraction of the energy budget of our galaxy, The Milky Way. The amount of energy in cosmic rays is comparable to the energy contained in both starlight, and in Galactic magnetic fields, Holder notes.

“Although cosmic rays were first detected 100 years ago, their origins have been a mystery,” says Holder. “One idea has been that they are produced by supernova explosions, but there was never any direct proof until now. This gamma ray measurement by VERITAS looks at a galaxy different from our own where there are 30 times as many supernovae. The fact that we see gamma rays indicates that there are many more cosmic rays being produced by these supernovae.”

In the active starburst region at the Cigar Galaxy's center, stars are being formed at a rate approximately ten times more rapidly than in “normal” galaxies like our Milky Way, Holder says.

The cosmic rays produced in the formation, life, and death of the massive stars in this region eventually produce diffuse gamma-ray emission via their interactions with interstellar gas and radiation.

Holder scheduled all of the observations as chair of the team's observing time allocation committee, and he and Ester Aliu, a former postdoctoral researcher, ran the array of telescopes based in southern Arizona to collect a significant portion of the 137 hours of data collected for the study. Holder provided a critical secondary analysis with an independent analysis package to confirm the result.

The Bartol Research Institute is a research center in UD's Department of Physics and Astronomy. The institute's primary function is to carry out forefront scientific research with a primary focus on physics, astronomy, and space sciences.