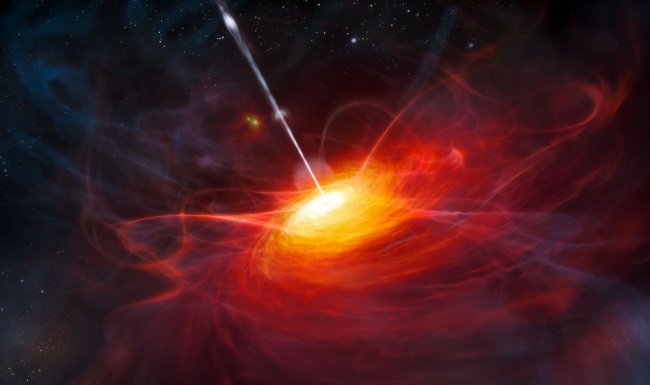 A team of European astronomers has used ESO's Very Large Telescope (VLT) and a host of other telescopes to discover and study the most distant quasar found to date. This brilliant beacon, powered by a black hole with a mass two billion times that of the Sun, is by far the brightest object yet discovered in the early Universe.

"This quasar is a vital probe of the early Universe. It is a very rare object that will help us to understand how supermassive black holes grew a few hundred million years after the Big Bang," says Stephen Warren, the team leader.

Quasars are very bright, distant galaxies that are believed to be powered by supermassive black holes at their centers. Their brilliance makes them powerful beacons that may help to probe the era when the first stars and galaxies were forming. The newly discovered quasar is so far away that its light probes the last part of the reionisation era.

About 300,000 years after the Big Bang, which occurred 13.7 billion years ago, the Universe had cooled down enough to allow electrons and protons to combine into neutral hydrogen (a gas without electric charge). This cool dark gas permeated the Universe until the first stars started forming about 100 to 150 million years later. Their intense ultraviolet radiation slowly split the hydrogen atoms back into protons and electrons, a process called reionisation, making the Universe more transparent to ultraviolet light. It is believe that this era occurred between about 150 million to 800 million years after the Big Bang.

Because light travels at a finite speed, astronomers look back in time as they look further away into the Universe. The quasar that has just been found, named ULAS J1120+0641, is seen as it was only 770 million years after the Big Bang (redshift 7.1). It took 12.9 billion years for its light to reach us. In those 12.9 billion years, the Universe expanded and the light from the object stretched as a result. The cosmological redshift, or simply redshift, is a measure of the total stretching the Universe underwent between the moment when the light was emitted and the time when it was received.

Although more distant objects have been confirmed (such as a gamma-ray burst at redshift 8.2, eso0917, and a galaxy at redshift 8.6, eso1041), the newly discovered quasar is hundreds of times brighter than these. Amongst objects bright enough to be studied in detail, this is the most distant by a large margin.

The next most-distant quasar is seen as it was 870 million years after the Big Bang (redshift 6.4). Similar objects further away cannot be found in visible-light surveys because their light, stretched by the expansion of the Universe, falls mostly in the infrared part of the spectrum by the time it gets to Earth. The European UKIRT Infrared Deep Sky Survey (UKIDSS) which uses the UK's dedicated infrared telescope in Hawaii was designed to solve this problem. The team of astronomers hunted through millions of objects in the UKIDSS database to find those that could be the long-sought distant quasars, and eventually struck gold.

"It took us five years to find this object," explains Bram Venemans, one of the members of the team. "We were looking for a quasar with redshift higher than 6.5. Finding one that is this far away, at a redshift higher than 7, was an exciting surprise. By peering deep into the reionisation era, this quasar provides a unique opportunity to explore a 100-million-year window in the history of the cosmos that was previously out of reach."

The distance to the quasar was determined from observations made with the FORS2 instrument on ESO's Very Large Telescope and instruments on the Gemini North Telescope. Because the object is comparatively bright it is possible to take a spectrum of it (which involves splitting the light from the object into its component colors). This technique allowed the astronomers to find out quite a lot about the quasar.

These observations showed that the mass of the black hole at the center of ULAS J1120+0641 is about two billion times that of the Sun. This very high mass is hard to explain so early after the Big Bang. Current theories for the growth of supermassive black holes predict a slow build-up in mass as the compact object pulls in matter from its surroundings.

"We think there are only about 100 bright quasars with redshift higher than 7 over the whole sky," concludes Daniel Mortlock. "Finding this object required a painstaking search, but it was worth the effort to be able to unravel some of the mysteries of the early Universe."