Most Powerful Known Eruption in the Universe Discovered 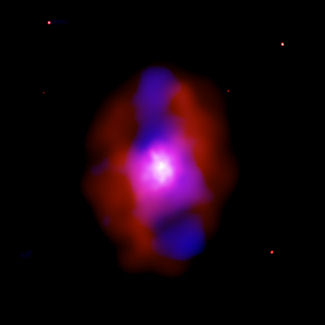 The huge eruption is seen in a Chandra image of the hot, X-ray emitting gas of a galaxy cluster called MS 0735.6+7421. Two vast cavities extend away from the supermassive black hole in the cluster's central galaxy. The eruption - which has lasted for 100 million years and is still going - has generated the energy equivalent to hundreds of millions of gamma-ray bursts.

This event was caused by gravitational energy release as enormous amounts of matter fell toward a black hole. Most of the matter was swallowed, but some of it was violently ejected before being captured by the black hole. "I was stunned to find that a mass of about 300 million Suns was swallowed," said Brian McNamara of Ohio University in Athens, lead author of the study that appears in the January 6, 2005 issue of Nature. "This is almost as massive as the supermassive black hole that swallowed it."

Astronomers are not sure where such large amounts of matter came from. One theory is that gas from the host galaxy catastrophically cooled and was then swallowed by the black hole.

The energy released shows that the black hole in MS 0735 has grown very dramatically during this eruption. Previous studies suggest that other large black holes have grown very little in the recent past, and that only smaller black holes are still growing quickly.

"This new result is as surprising as it is exciting", said co-author Paul Nulsen of the Harvard-Smithsonian Center of Astrophysics. "This black hole is feasting when it should be fasting."

The rapid growth of supermassive black holes is usually detected by observing very bright radiation from the centers of galaxies in the optical and X-ray wavebands, or luminous radio jets. In MS 0735 no bright central radiation is found and the radio jets are faint. Therefore, the true nature of MS 0735 is only revealed through X-ray observations of the hot cluster gas.

"Until now we had no idea that this black hole was gorging itself", said co-author Michael Wise of the Massachusetts Institute of Technology. "The discovery of this eruption shows that X-ray telescopes are necessary to understand some of the most violent events in the Universe."

The astronomers estimated how much energy was needed to create the cavities by calculating the density, temperature and pressure of the hot gas. By making a standard assumption, that 10% of the gravitational energy goes into launching the jets, they estimated how much material the black hole swallowed.

Besides generating the cavities, some of the energy from this eruption should keep the hot gas around the black hole from cooling, and some of it may also generate large-scale magnetic fields in the galaxy cluster.

Chandra observers have discovered other cavities in galaxy clusters, but this one is easily the largest and the most powerful. For example, the energy content here exceeds that of the Perseus cavities by 250 times, and dwarfs the cavities in M87 by a factor of 10,000.