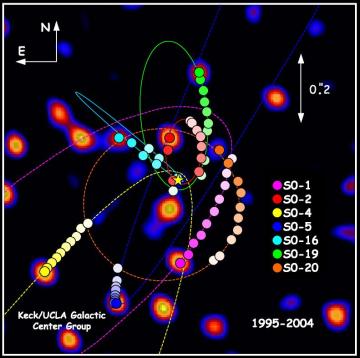 Black holes are collapsed stars so dense that nothing can escape their gravitational pull, not even light. Black holes cannot be seen directly, but their influence on nearby stars is visible, and provides a signature. The supermassive black hole at the center of the Milky Way Galaxy has a mass of more than 3.7 million times that of our sun, and from Earth appears in the constellation Sagittarius. Because of this, the Milky Way black hole has been given the name “Sagittarius A*.”

In the most comprehensive study of Sagittarius A* to date, Farhad Yusef-Zadeh, an astrophysicist at Northwestern University, led a team that used nine ground and space-based telescopes (including the Hubble Space Telescope and the XMM-Newton X-ray Observatory) and discovered that Sagittarius A* produces rapid flares close to the innermost region of the black hole in many different wavelengths and that these emissions go up and down together.

This insight into the frequent bursts of radiation observed shooting off the black hole like firecrackers -- similar to solar flares -- will help scientists better understand the dynamics of Sagittarius A* and the source of its flares.

“We observed that the less energetic infrared flares occur simultaneously with the more energetic X-ray flares as well the submillimeter flares,” said Yusef-Zadeh. “From this, we infer that the particles that are accelerated near the black hole give rise to X-ray, infrared, and submillimeter emission. In addition, not all of the material that approaches the black hole gets sucked in. Some of the material may be ejected from the vicinity of the central black hole or event horizon. Our observations hint that these flares have enough energy to escape from the closest confines of the supermassive black hole’s sphere of influence.”

The astronomers also determined that the real engine of the flare activity is in the infrared wavelength. Using observations from Hubble’s Near-Infrared Camera and Multi-Object Spectrometer, they found infrared activity 40 percent of the time, more than was observed at any other wavelength.

“This is not something we expected,” said Yusef-Zadeh. “Other black holes in other galaxies don’t show this flare activity. We believe it is the dynamics of the captured material -- very close to the event horizon of the black hole -- that produces the flares. And the flares are fluctuating at low levels, like flickers. The flare radiation results from fast-moving materials in the innermost region of the black hole.

In related research, UCLA astronomers are determining, for the first time, orbits of massive young stars located a few light months from the enormous black hole at the center of our Milky Way galaxy. The origin of young stars at the center of our galaxy has puzzled astronomers, but the orbits may be the key to unlocking the mystery, according to UCLA graduate student Jessica Lu.

The hostile environment around the supermassive black hole should make it extremely difficult for stars to form, but many young stars have been detected around the black hole, said Lu, who reported that she and a UCLA team are tracking a puzzling group of more than 30 massive young stars of uncertain origins.

"How were these stars formed in such an inhospitable region?" Lu asked. “Using the Keck's Laser Guide Star adaptive optics system, we expect to resolve the paradox. We are able to measure how these young stars move across the sky with an unparalleled precision (only two kilometers per second) and determine, for the first time, the orbit of each of the young stars located a few light months from the black hole.”

"Just as a fingerprint can be used to identify a person, the information encoded in the orbits of the young stars will tell us how and where they formed," said Lu. Lu added that these are the closest stars to the supermassive black hole that have not had their orbits distorted by their inhospitable environment.

"The orbits of these young stars suggest the stars were born far from the black hole in a massive star cluster, which migrated in," Lu reported. "We can now track the stars so precisely as they move around the black hole that we can determine each star's exact orbit."

The UCLA team used the 10-meter Keck II Telescope in Hawaii to determine the orbits of the massive young stars located a few light months from Sagittarius A*.