NASA-funded Sounding Rocket Launches Straight Through an Aurora Over Alaska 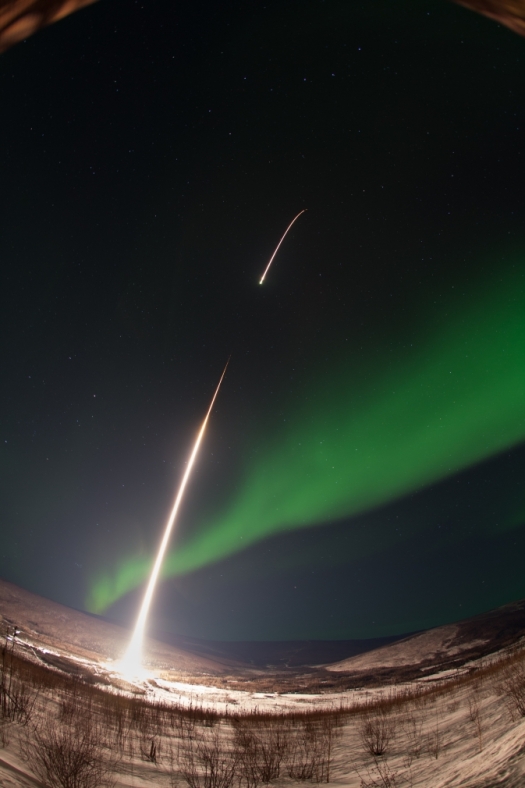 On March 3, 2014, at 6:09 a.m. EST, a NASA-funded sounding rocket launched straight into an aurora over Venetie, Alaska. The Ground-to-Rocket Electrodynamics - Electron Correlative Experiment, or "GREECE" sounding rocket mission, which launched from Poker Flat Research Range in Poker Flat, Alaska, was used to study classic curls in the aurora in the night sky.

The GREECE instruments traveled on a sounding rocket that launched for a ten-minute ride right through the heart of the aurora reaching its zenith over the native village of Venetie, Alaska.

To study the curl structures, GREECE consists of two parts - ground-based imagers located in Venetie to track the aurora from the ground and the rocket to take measurements from the middle of the aurora itself.

At their simplest, auroras are caused when particles from the sun funnel over to Earth's night side, generate electric currents, and trigger a shower of particles that strike oxygen and nitrogen some 60 to 200 miles up in Earth's atmosphere, releasing a flash of light. But the details are always more complicated, of course.

Researchers wish to understand the aurora, and movement of plasma in general, at much smaller scales including such things as how different structures are formed there. This is a piece of information, which in turn, helps paint a picture of the Sun-Earth connection and how energy and particles from the Sun interact with Earth's own magnetic system, the magnetosphere.

GREECE is a collaborative effort between the Southwest Research Institute (SWRI), which developed particle instruments and the ground-based imaging, and the University of California, Berkeley, measuring the electric and magnetic fields. The launch is supported by a sounding rocket team from NASA's Wallops Flight Facility, Wallops Island, Virginia. The Poker Flat Research Range is operated by the University of Alaska, Fairbanks.

"The conditions were optimal," said Marilia Samara, principal investigator for the mission at Southwest Research Institute in San Antonio, Texas. "We can't wait to dig into the data."

"Our overarching goal is to study the transfer of energy from the Sun to Earth," said Samara. "We target a particular manifestation of that connection -- the aurora."

"Auroral curls are visible from the ground with high-resolution imaging," said Samara. "And we can infer from those observations what's happening farther out. But to truly understand the physics we need to take measurements in the aurora itself."

Different combinations of information on the particles and fields observed in the aurora, would point to a different cause for these swirls in the sky. Auroral curls might, perhaps, be caused by what's called a Kelvin-Helmholtz instability, the same combination of low and high speed flows that lead to surfer waves near the beach. Or they could be caused by something called Alfven waves - a type of electromagnetic wave present only in plasmas. Or they could be caused by something else altogether.