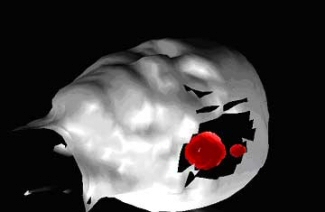 ( Note: This item is a little off topic but I am posting it as a conversational reference to use for those situations where people simply don't understand the collateral benefits of pure science - the science of space exploration in particular. -Ed. )

Using an infrared video camera developed by researchers at NASA's Jet Propulsion Laboratory in Pasadena, Calif., surgeons are testing thermal imaging and image processing to see if they can create useful maps of brain tumors.

Researchers want to see if the camera, which detects infrared -- or heat -- emissions might help neurosurgeons better visualize tumors before they operate and also find tiny clusters of cancerous cells that might remain after surgery.

NASA scientists already use infrared technology to map Earth's surface and search for distant objects in the universe. Firefighters use it to locate people trapped in buildings, and military forces track down their targets hiding in the dark.

Physicians have used infrared technology for mapping the roots of skin cancer, but it has never been used for brain tumors until now.

Doctors at the Keck School of Medicine of the University of Southern California in Los Angeles are using the JPL- developed camera and infrared imaging in a trial. They're trying to see if they can sketch tumor margins by detecting temperature changes during surgery, since tumor cells emit more heat than healthy ones. "The camera's precision allows it to map temperature differences of one-hundredth of a degree Celsius at a high resolution," said Dr. Sarath Gunapala, JPL lead engineer for the camera.

Currently, neurosurgeons delve carefully into the brain and remove as much of the tumor as they can see under magnification. However, they may take healthy tissue along with the cancerous cells or leave residual cells that can grow back along the tumor's margins.

"Brain tumor tissue looks the same as healthy tissue on the edges," said Babak Kateb of the Keck School of Medicine, a research fellow and lead scientist of the project. "Tumor cells use different biochemical pathways from normal cells, and when researchers use the infrared camera, they can pick up hotspots or areas of tissue warmer than normal tissue."

After doctors receive infrared images of the brain, image processing software marks the boundaries between tumor regions and surrounding healthy tissue. "We are refining software similar to what our group has been using for analyzing rocks on Mars and other planets," said Dr. Wolfgang Fink, JPL senior researcher.

"An advantage of thermal imaging is that it's non-invasive," said Dr. Peter Gruen, a neurological surgeon at the Keck School of Medicine. "It measures heat energy emerging from patients without exposing them to X-rays or intravenous solutions, and is performed without incisions or contact to the brain tissue."

A clinical study of this proposed mapping process is underway at the Keck School of Medicine.

For more information on the USC study on the Internet, visit: http://www.usc.edu/keck

For more information on the infrared camera on the Internet, visit: http://www.jpl.nasa.gov/technology/features/tech930.html

For more information on NASA technology spinoffs on the Internet, visit: http://www.sti.nasa.gov/tto/

For more information about NASA on the Internet, visit: http://www.nasa.gov