NASA Moves Forward with a Saturn V on Steroids 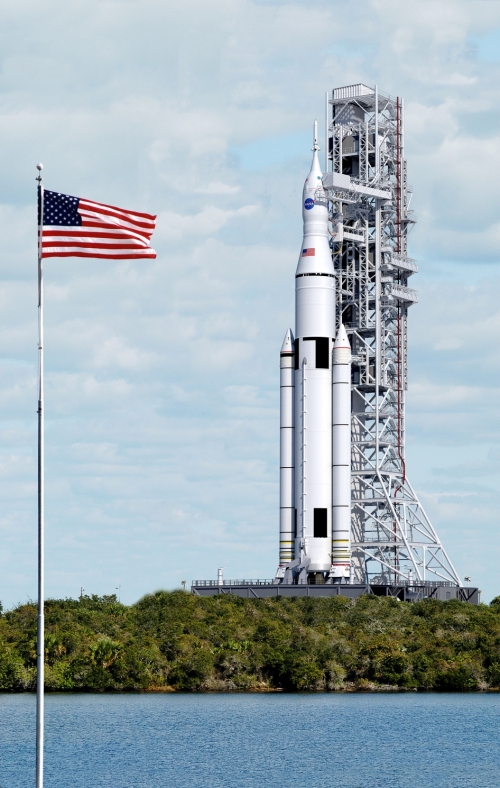 NASA is nearing completion of two major structural restoration projects for the B-2 Engine Test Stand at the Stennis Space Center in Mississippi, marking critical milestones for testing the core stage of the new heavy-lift launch vehicle, the Space Launch System (SLS).

Reminiscent of the Saturn V launch vehicle used in the Apollo missions of the late 1960s and early 70s, NASA's new Space Launch System is an advanced, heavy-lift launch vehicle that will provide an entirely new capability for science and human exploration beyond Earth's orbit. The Space Launch System will give the nation a safe, affordable and sustainable means of reaching beyond our current limits and open new doors of discovery from the unique vantage point of space.

The Space Launch System, or SLS, will carry
the Orion Multi-Purpose Crew Vehicle, as well as
important cargo, equipment, and science experiments, to deep space. The Orion spacecraft will carry up to four astronauts beyond low Earth orbit on long duration, deep space missions and include both crew and service modules and a launch abort system to significantly increase crew safety.

As NASA's commercial partners create an American supply line to the International Space Station, SLS will provide the transportation needed for NASA to reach further into our solar system.

However, if needed, SLS will support backup transportation to the International Space Station. SLS will be the most powerful rocket in history and is designed to be flexible and evolvable to meet a variety of crew and cargo mission needs.

The SLS will be NASA's first exploration class vehicle since the Saturn V took American astronauts to the moon over 40 years ago. With its superior lift capability, the SLS will expand our reach in the solar system, allowing astronauts aboard the Orion spacecraft to explore multiple, deep space destinations including near-Earth asteroids, Lagrange points, the moon, and ultimately Mars.

The SLS heavy-lift launch vehicle is essential to NASA's deep-space exploration endeavors. The system will be flexible and include multiple launch vehicle configurations. The SLS will carry crew, cargo, and science missions to deep space.

Providing an evolvable architecture allows customization of the SLS to fit individual mission requirements, increasing capability with each configuration. The next wave of human exploration will take explorers further into the solar system - finding potential resources, developing new technologies, and discovering answers to mysteries about our place in the universe.

Exploration Mission 1 planned for 2017 will launch an un-crewed Orion spacecraft to demonstrate the integrated system performance of the SLS rocket and spacecraft prior to a crewed flight.

The second SLS mission, Exploration Mission 2, is targeted for 2021 and will launch Orion and a crew of up to four American astronauts.

The SLS will use proven hardware and cutting edge tooling and manufacturing technology from the Space Shuttle and other exploration programs. This will significantly reduce development and operations costs. It will use a liquid hydrogen and liquid oxygen propulsion system, which will include the RS-25 engine from the Space Shuttle Program for the core stage and the J-2X engine for the upper stage. The SLS also will use solid rocket boosters for the initial development flights, while industry will compete to design advanced boosters based on performance requirements and affordability considerations.

The Boeing Company of Huntsville, Alabama is developing the SLS core stage, including its avionics. Towering over 200 feet tall with a diameter of 27.5 feet, the core stage will store cryogenic liquid hydrogen and liquid oxygen that will feed the RS-25 engines for the SLS. The stage is being built at NASA's Michoud Assembly Facility in New Orleans with state of the art manufacturing equipment. Flight computer hardware and battery unit development are under way.

The SLS core stage will get its power from four RS-25 engines - former space shuttle main engines built by Pratt and Whitney Rocketdyne of Canoga Park, California. The SLS Program has an inventory of 15 RS-25 flight engines, which operated with 100 percent mission success during 135 space shuttle missions.

Two five-segment solid rocket boosters will be used for the first two, 70 metric ton flights of the SLS. The prime contractor for the boosters - ATK of Brigham City, Utah - has begun processing its first SLS hardware components in preparation for the initial qualification test planned for spring 2013.

The spacecraft and payload integration team is responsible for integrating the Orion spacecraft and payload with the SLS vehicle using structural adapters. The team also will procure and integrate an interim cryogenic propulsion stage to power the first two flights of the SLS, based on Boeing's Delta Cryogenic Second Stage used on the Delta IV family of launch vehicles. The interim cryogenic propulsion stage will boost the Orion spacecraft to the correct altitude and trajectory needed to send the spacecraft around the moon in order to check out vital systems during the initial test flights.

While work progresses on the initial 70 metric ton SLS, the advanced development team is working on improving affordability, increasing reliability and increasing performance needed to evolve the initial vehicle to configurations that can provide even greater lift capacity. This evolved, flexible approach can meet a variety of missions needed to carry crew and cargo of varying sizes. Configurations over 100 metric tons up to 130 metric tons are currently being studied.

The 130 metric ton SLS will include an upper stage to provide additional power needed to travel to deep space. The upper stage, built by Boeing, will share common attributes with the core stage such as its outer diameter, material composition, subsystem components and tooling to save cost and design time.

Two J-2X engines being developed by Pratt and Whitney Rocketdyne will power the upper stage. The J-2X is a highly efficient and versatile rocket engine - the first liquid oxygen and liquid hydrogen rocket engine to be developed in 40 years that will be certified to transport humans.