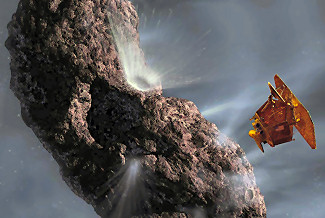 "From central Florida to the surface of a comet in six months is almost instant gratification from a deep space mission viewpoint," said Rick Grammier, Deep Impact project manager at NASA's Jet Propulsion Laboratory, Pasadena, Calif. "It is going to be an exciting mission, and we can all witness its culmination together as Deep Impact provides the planet with its first man-made celestial fireworks on our nation's birthday, July 4th."

The fireworks will be courtesy of a 1-by-1 meter (39-by-39 inches) copper-fortified probe. It is designed to obliterate itself as it excavates a crater possibly large enough to swallow the Roman Coliseum. Before, during and after the demise of this 372-kilogram (820-pound) impactor, a nearby spacecraft will be watching the 6-kilometer-wide (3.7-mile) comet nucleus, collecting pictures and data of the event.

"We will be capturing the whole thing on the most powerful camera to fly in deep space," said University of Maryland astronomy professor Dr. Michael A'Hearn, Deep Impact's principal investigator. "We know so little about the structure of cometary nuclei that we need exceptional equipment to ensure that we capture the event, whatever the details of the impact turn out to be."

Imagery and other data from the Deep Impact cameras will be sent back to Earth through the antennas of the Deep Space Network. But they will not be the only eyes on the prize. NASA's Chandra, Hubble and Spitzer space telescopes will be observing from near-Earth space. Hundreds of miles below, professional and amateur astronomers on Earth will also be able to observe the material flying from the comet's newly formed crater.

Deep Impact will provide a glimpse beneath the surface of a comet, where material and debris from the solar system's formation remain relatively unchanged. Mission scientists are confident the project will answer basic questions about the formation of the solar system, by offering a better look at the nature and composition of the celestial travelers we call comets.

"Understanding conditions that lead to the formation of planets is a goal of NASA's mission of exploration," said Andy Dantzler, acting director of the Solar System division at NASA Headquarters, Washington, D.C. "Deep Impact is a bold, innovative and exciting mission which will attempt something never done before to try to uncover clues about our own origins."

With a closing speed of about 37,000 kilometers per hour (23,000 miles per hour), what of the washing machine-sized impactor and its mountain-sized quarry?

"In the world of science, this is the astronomical equivalent of a 767 airliner running into a mosquito," said Don Yeomans, a Deep Impact mission scientist at JPL. "It simply will not appreciably modify the comet's orbital path. Comet Tempel 1 poses no threat to Earth now or in the foreseeable future."

For more information about Deep Impact on the Internet, visit: http://www.nasa.gov/deepimpact.