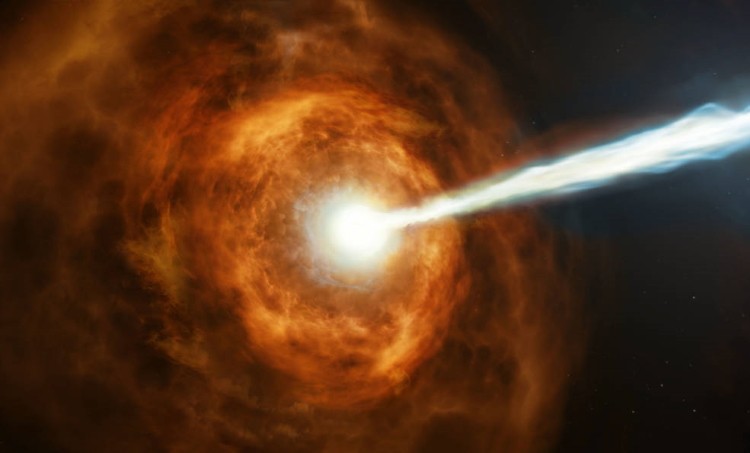 Gamma Ray Bursts (GRBs) were discovered by American surveillance satellites in the late 1960s. These satellites were looking for gamma rays coming from possible clandestine Soviet nuclear tests. Instead these satellites found brief but intense flashes of gamma rays coming from random directions in space. To this day GRBs remain one of the greatest mysteries of modern astronomy. Despite lasting only a few milliseconds to several minutes, they are the most energetic phenomena known. An individual GRB can release in a matter of seconds the same amount of energy that our Sun will radiate over its 10 billion year lifetime. These beams blast out of imploding stars at over 99 percent the speed of light. They carry most of their energy in the form of gamma rays -- a lethal form of radiation that can penetrate bone and tear apart living cells. If our planet got caught in a nearby Gamma Ray Burst, the atmosphere would be largely stripped away. The current record for a super powerful GRB has just occurred, and it goes to a January 2019 outburst. The eruption came from a galaxy located so far away that the explosion actually happened 5 billion years ago. When the radiation finally arrived at Earth, it was seen by our satellite sentries that monitor the sky for such fireworks, including NASA’s Swift and Fermi telescopes, in addition to the Major Atmospheric Gamma Imaging Cherenkov (MAGIC) telescopes on the Canary Islands. Hubble can't detect gamma rays, but its sharp vision was used to see where the burst came from. Hubble found that the host galaxy of the GRB is actually one of a pair of colliding galaxies.