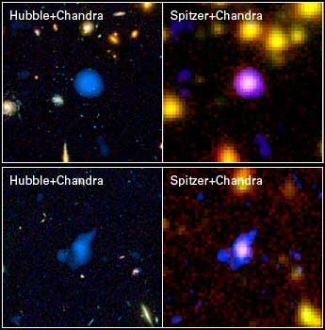 [Top and Bottom Left] - A Hubble Space Telescope deep view of two small portions of the GOODS field uncovers some of the faintest galaxies ever seen. But at the center of each image is the X-ray glow from heated material falling into a million- or billion-solar mass black hole — as seen by Chandra — which does not have any visible-light counterpart in either field.

[Top and Bottom Right] - The Spitzer Space Telescope's infrared view of the same two regions of the GOODS field uncovers the glow of a powerful active galactic nucleus in both views. The nucleus is either shrouded in dust, or is at such a great distance that all of its light has been stretched into infrared wavelengths by the universe's expansion.

Dr. Mark Dickinson, of the National Optical Astronomy Observatory, Tucson, Ariz., and principal investigator for the new observations, said, "With these ultra-deep Spitzer images, we are easily seeing objects throughout time and space, out to redshifts of 6 or more, where the most distant known galaxies lie. Moreover, we see some objects that are completely invisible, but whose existence was hinted at by previous observations from the Chandra and Hubble Observatories."

Seven of the objects detected by Spitzer may be part of the long-sought population of "missing" supermassive black holes that powered the bright cores of the earliest active galaxies. The discovery completes a full accounting of all the X-ray sources seen in one of the deepest surveys of the universe ever taken.

This detective story required the combined power of NASA's three orbiting Great Observatories — the Hubble Space Telescope, Chandra X-ray Observatory, and Spitzer Space Telescope. Each observatory works with different wavelengths of electromagnetic radiation, from high-energy X-rays with Chandra, through visible light with Hubble, and into the infrared with Spitzer. Together, these telescopes yield far more information than any single instrument.

All three telescopes peered out to distances of up to 13 billion light-years toward a small patch of the southern sky containing more than 10,000 galaxies, in a coordinated project called the Great Observatories Origins Deep Survey (GOODS). Chandra images detected more than 200 hundred X-ray sources believed to be supermassive black holes in the centers of young galaxies. The X-rays are produced by extremely hot interstellar gases falling into the black holes.

Hubble's Advanced Camera for surveys revealed optical galaxies around almost all the X-ray black holes. However, there remained seven mysterious X-ray sources for which there was no optical galaxy. Dr. Anton Koekemoer of the Space Telescope Science Institute, Baltimore, Md., who discovered these sources, presented three intriguing possibilities for their origin. "The galaxies around these black holes may be completely hidden by thick clouds of dust absorbing all their light, or may contain very old, red stars. Or some of them could be the most distant black holes ever observed — perhaps as far as 13 billion light-years." In this case all their optical light would be shifted to very long infrared wavelengths by the expansion of the universe.

Three of Koekemoer's galaxies are extremely red, or bright in the infrared. The Spitzer data, together with new images at shorter infrared wavelengths from the Very Large Telescope at the European Southern Observatory, indicate that the galaxies around these black holes could be heavily obscured by dust, perhaps more distant than other known dust-obscured galaxies. Some of the other objects, however, have quite different colors, and are even more intriguing. "Their colors may be consistent with objects more distant than any now known," said Dickinson, who cautioned that additional Spitzer observations later this year will provide more color information to confirm what kind of objects these might be.

Old Galaxies Shine in Infrared: In another study using the same Spitzer data, Haojing Yan of the Spitzer Science Center at the California Institute of Technology, Pasadena, Calif., studied 17 unusual galaxies in the area of the Hubble Ultra Deep Field. This small patch of sky within the GOODS area was recently the target for the deepest optical images ever taken with Hubble's Advanced Camera, and was also studied with Hubble's Near Infrared Camera and Multi-Object Spectrometer. The Ultra Deep Field optical images, released in March 2004, reach more than five times fainter than the GOODS Hubble data. But even with that phenomenal sensitivity, two of the 17 Spitzer-selected objects remain completely invisible in optical light, while the others are only faintly detected. Yan finds that these galaxies get steadily brighter at longer wavelengths, and seem to be more distant cousins of the so-called "Extremely Red Objects," known from previous deep surveys. Most are distant galaxies that are red because they are either old or dusty. These new Spitzer-identified objects, however, appear to lie at higher redshifts, out to nearly a redshift of 3, when the universe was only two billion years old.

"These objects could be the remnants of the first stars — the very first galaxies formed in the earliest stages of the universe," said Yan. Most galaxies that we see today formed their stars gradually over a long period of time. But these 17 objects seem to be "old before their time," perhaps almost as old as the universe itself at that early epoch. "If we indeed are seeing the direct, 'pure' descendants of the first stars, this would make a thrilling story," said Yan. Further Spitzer observations at longer wavelengths, planned for later this year, should help decide whether these objects are red because they are old, or because they are young and actively forming stars, but enveloped in dust.

Black Holes in Hiding: Using Hubble and Chandra data, Dr. Meg Urry, a GOODS astronomer at Yale University, New Haven, Conn., and her team suggest that most accreting black holes are hidden from view at visible wavelengths, even in the early universe. Few such hidden black holes had previously been found at such large distances, despite theoretical arguments for their existence. They were missed because their visible radiation is so dim they look like faint, ordinary galaxies. "With the great sensitivity of the new Spitzer infrared cameras, and with the superb spatial resolution of Chandra, finding all of the black holes that are powered by infalling gas is now possible."

Urry's team is using data from the three space observatories to take a census of the supermassive black holes that formed two to five billion years after the big bang. Most of these active galactic nuclei are hidden by dust, which absorbs visible and some X-ray light but emits strongly at infrared wavelengths. "The Spitzer GOODS observations verify that large numbers — perhaps three-quarters — of the obscured active galactic nuclei were indeed present in the early universe. The longer-wavelength Spitzer data still to come will reveal even more shrouded AGNs," said Urry, "including some, missed by X-ray observations, which look like ultraluminous infrared galaxies."

The Spitzer Space Telescope is a mission managed by NASA's Jet Propulsion Laboratory, Pasadena, Calif. Spitzer science operations are conducted at the California Institute of Technology. The Space Telescope Science Institute (STScI), Baltimore, Md. is operated by the Association of Universities for Research in Astronomy, Inc. (AURA), for NASA, under contract with the Goddard Space Flight Center, Greenbelt, Md. The Hubble Space Telescope is a project of international cooperation between NASA and the European Space Agency (ESA). NASA's Marshall Space Flight Center, Huntsville, Ala., manages the Chandra program for NASA's Office of Space Science, Washington. Northrop Grumman of Redondo Beach, Calif., formerly TRW, Inc., was the prime development contractor for the observatory. The Smithsonian Astrophysical Observatory controls science and flight operations from the Chandra X-ray Center in Cambridge, Mass.