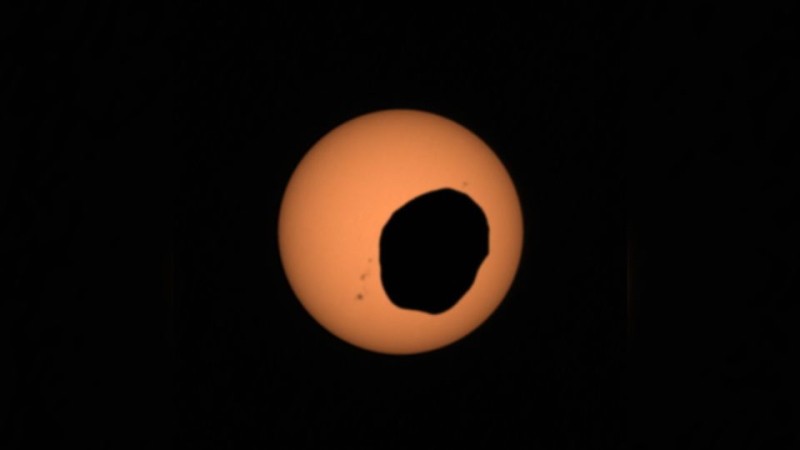 NASA’s Perseverance Mars rover has captured dramatic footage of Phobos, Mars’ potato-shaped moon, crossing the face of the Sun. These observations can help scientists better understand the moon’s orbit and how its gravity pulls on the Martian surface. Captured with Perseverance’s next-generation Mastcam-Z camera, the eclipse lasted a little over 40 seconds – much shorter than a typical solar eclipse involving Earth’s Moon. The images are the latest in a long history of NASA spacecraft capturing solar eclipses on Mars. Back in 2004, the twin NASA rovers Spirit and Opportunity took the first time-lapse photos of Phobos during a solar eclipse. Curiosity then continued the trend with videos shot by its Mastcam camera system. But Perseverance, which landed in February 2021, has provided the most zoomed-in video of a Phobos solar eclipse yet – and at the highest-frame rate ever.

just lovely
but nothing compared to earth's version

It seems almost magical as to how our Moon almost exactly covers the Sun during a total solar eclipse.

The distances and diameters of the two line up almost perfectly -- Fine-tuning at its best.

What are the odds of that?