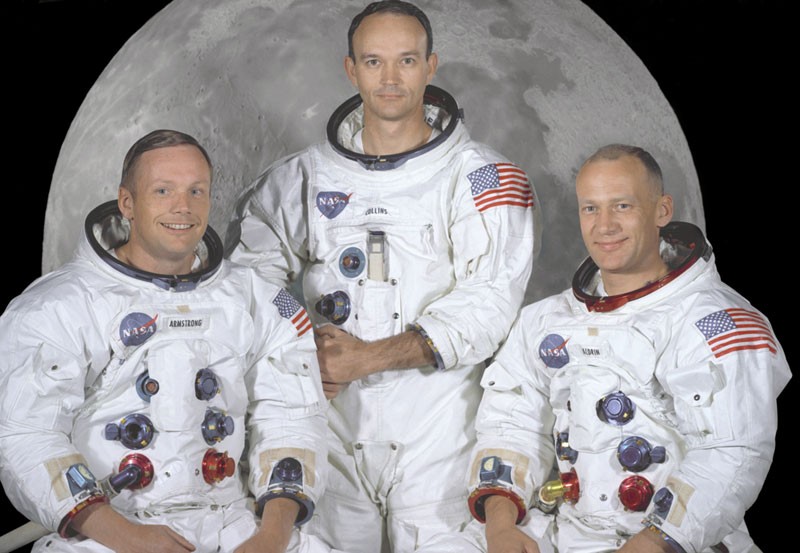 It’s July 16, 1969 -- Just a little over eight years have passed since the flights of Cosmonaut Yuri Gagarin and Astronaut Alan Shepard in 1961, followed in 1962 by President Kennedy's challenge to put a man on the moon before the end of the decade. It’s only two and a half years since the horrific Apollo 1 fire during pre-launch testing in 1967 at Cape Kennedy that took the lives of Astronauts Virgil Grissom, Edward White, and Roger Chaffee. And it’s only seven months since NASA made the bold decision to send the Apollo 8 Astronauts -- Frank Borman, James Lovell, and William Anders -- all the way to the moon, achieving orbit on Christmas Eve 1968 on the first manned flight of the massive Saturn V rocket. Now, on the morning of July 16th, Apollo 11 astronauts Neil Armstrong, Buzz Aldrin, and Michael Collins sit atop another Saturn V rocket that will use its 7.5 million pounds of thrust to propel them into space and into history. It was 50 years ago that Neil Armstrong took the first small step onto the surface of the moon that changed the course of history. We now stand now on a new horizon, poised to take the next giant leap deeper into the solar system, extending a path to Mars and beyond. It gives us pause to consider that the first woman or man to set foot on Mars is already walking the Earth today.