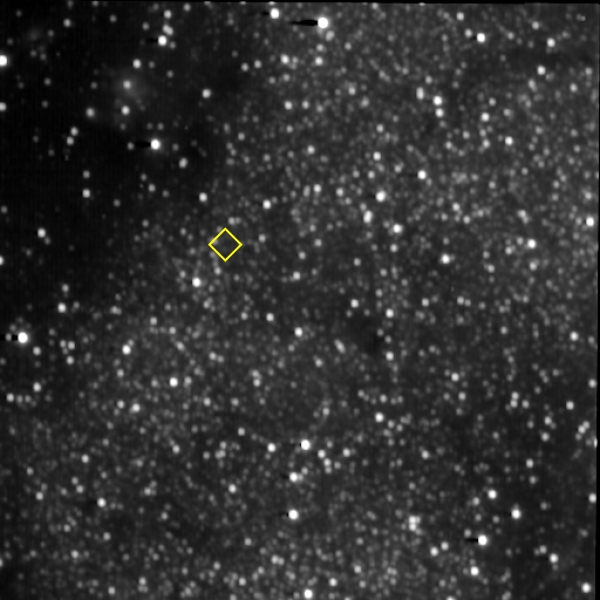 Continuing on its path through the outer regions of the solar system, NASA's New Horizons spacecraft has now traveled half the distance from Pluto, its storied first target, to 2014 MU69, the Kuiper Belt object (KBO) that it will fly past on January 1, 2019. The spacecraft reached that milestone on April 3, 2017 when it was 486.19 million miles (782.45 million kilometers) beyond Pluto -- the same distance to MU69. I suppose that when you're making history at 32,000 miles per hour, time moves faster and distances start to shrink.

"It's fantastic to have completed half the journey to our next flyby. That flyby will set the record for the most distant world ever explored in the history of civilization," said Alan Stern, New Horizons principal investigator from the Southwest Research Institute in Boulder, Colorado.

Interestingly, on April 7th, New Horizons reached the halfway point in time between its closest approaches to Pluto (which occurred on July 14, 2015) and MU69, which is predicted for New Year's Day 2019. The nearly five day difference between the halfway markers of "distance" and "time" is due to the gravitational tug of the Sun. The spacecraft is actually getting slightly slower as it pulls away from the Sun's gravity, so the spacecraft crosses the midpoint in distance a bit before it passes the midpoint in time.

The New Horizons spacecraft eased into a long summer's nap, entering a hibernation phase on April 7th that will last until early September.

Mission controllers at the Johns Hopkins University Applied Physics Laboratory (APL) in Laurel, Maryland, verified that New Horizons, acting on commands uplinked to its main computer the week before, entered a state of hibernation. With the spacecraft now about 3.5 billion miles (5.7 billion kilometers) from Earth, the radio signals carrying that word from New Horizons needed just over five hours, traveling at the speed of light, to reach the APL mission operations center through NASA's Deep Space Network.

Before today, New Horizons had been "awake" for almost two and a half years, since December 6, 2014, when the team began final preparations for the Pluto approach and encounter operations. The 852 days since the end of its last hibernation period is the longest, by far, that New Horizons has remained in active operations since it was launched in January 2006.

But that's because New Horizons was in the throes of its prime mission to conduct a six month flyby of the Pluto system that culminated with its close approach on July 14, 2015. That was followed by 16 months transmitting the data from that flight back to Earth. The spacecraft then began an extended mission in the Kuiper Belt, making distant observations of several Kuiper Belt objects and setting itself up for a close flyby on January 1, 2019, of 2014 MU69 and sampling the space environment in the outer reaches of the solar system.

"We're looking forward to taking advantage of the reduced mission operations workload during this hibernation, as well as one early next year, to plan much of the MU69 flyby," said Alice Bowman, New Horizons mission operations manager, from APL.

This hibernation period will last 157 days, ending on September 11th. But mission activity won't necessarily stop. The science and mission operations teams will be developing detailed command loads for the MU69 encounter, shaping the science observations for much of nine day flyby. Their plans currently accommodate two potential flyby altitudes. The team will narrow its choice to the final altitude as it learns more about the properties and orbit of MU69, which was discovered less than three years ago.

During hibernation mode, much of the New Horizons spacecraft is unpowered. The on-board flight computer monitors system health and broadcasts a weekly beacon status tone back to Earth and about once a month sends home data on spacecraft health and safety. On-board sequences sent in advance by mission controllers will eventually wake New Horizons to check out critical systems, gather new Kuiper Belt science data, and perform course corrections (if necessary).

New Horizons pioneered routine cruise flight hibernation for NASA. Not only has hibernation reduced wear and tear on the spacecraft's electronics, it has also lowered operations costs and freed up NASA Deep Space Network tracking and communication resources for other missions.

"The January 2019 MU69 flyby is the next big event for us, but New Horizons is truly a mission to more broadly explore the Kuiper Belt," said Hal Weaver, New Horizons project scientist from APL in Laurel, Maryland. "In addition to MU69, we plan to study more than two dozen other KBOs in the distance and measure the charged particle and dust environment all the way across the Kuiper Belt." All spacecraft systems are healthy and operating normally, and the spacecraft is on course for its MU69 flyby.