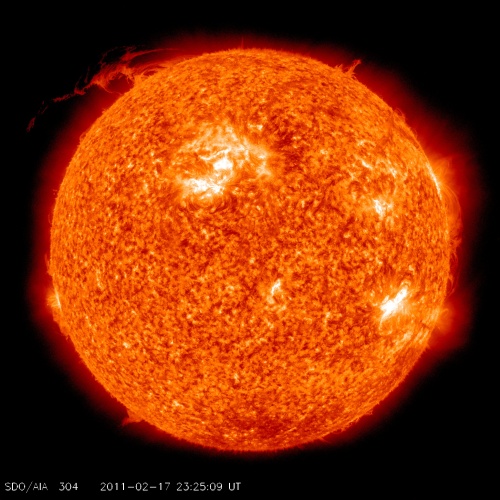 Solar flares are the most powerful explosions in the solar system. Packing a punch equal to a hundred million hydrogen bombs, they obliterate everything in their immediate vicinity.

From the events of this past week, it looks like the new solar cycle is beginning to ramp up. The sun emitted its first X-class flare in more than four years on February 14, 2011 at 8:56 p.m. EST.

On the "Richter Scale" of solar flares, which ranks X1 as a big event, the blast registered X6.6, making it a rather significant solar flare. Fortunately, the Coronal Mass Ejection (CME), or particle cloud, produced by the event appears to be rather weak and is not expected to produce any strong effects at Earth other than perhaps some beautiful auroras in the high northern and southern latitudes.

Preliminary coronagraph data from STEREO-B and SOHO agree that the explosion produced a fast but not particularly bright Coronal Mass Ejection (CME).

This was the largest solar flare since December 5, 2006. X-class flares are the most powerful of all solar events and can trigger radio blackouts and long-lasting radiation storms.

This particular flare comes on the heels of a few M-class and several C-class flares over the past few days. It also had a CME associated with it that traveled away from the sun at about 900 Km/second.

Researchers have known about the solar cycle since the mid-1800s. Graphs of sunspot numbers resemble a roller coaster, going up and down with an approximately 11-year period. At first glance, it looks like a regular pattern, but predicting the peaks and valleys has proven troublesome. Cycles vary in length from about 9 to 14 years. Some peaks are high, others low. The valleys are usually brief, lasting only a couple of years, but sometimes they stretch out much longer. In the 17th century the sun plunged into a 70-year period of spotlessness known as the Maunder Minimum that still baffles scientists.

The 1859 solar storm known as the "Carrington Event" was named after astronomer Richard Carrington, who observed the solar flare that caused a great deal of the havoc. The solar flare electrified transmission cables, set fires in telegraph offices, and produced Northern Lights so bright that people could read newspapers by their red and green glow.

A NASA-funded report by the National Academy of Sciences prepared in in 2009 found that if a similar storm occurred today, it could cause $1 to $2 trillion in damages to society's high-tech infrastructure and require four to ten years for complete recovery. For comparison, Hurricane Katrina caused "only" $80 to $125 billion in damage and was a localized event rather than worldwide.

The problem begins with the electric power grid. "Electric power is modern society's cornerstone technology on which virtually all other infrastructures and services depend," the report notes. Yet it is particularly vulnerable to bad space weather. Ground currents induced during geomagnetic storms can actually melt the copper windings of transformers at the heart of many power distribution systems. Sprawling power lines act like antennas, picking up the currents and spreading the problem over a wide area. The most famous geomagnetic power outage happened during a space storm in March 1989 when six million people in Quebec lost power for 9 hours.

According to the report, power grids may be more vulnerable than ever. The problem is interconnectedness. In recent years, utilities have joined grids together to allow long-distance transmission of low-cost power to areas of sudden demand. On a hot summer day in California, for instance, people in Los Angeles might be running their air conditioners on power routed from Oregon. It makes economic sense, but not necessarily geomagnetic sense. Interconnectedness makes the system susceptible to wide-ranging "cascade failures."

To estimate the scale of such a failure, report co-author John Kappenmann of the Metatech Corporation looked at the great geomagnetic storm of May 1921, which produced ground currents as much as ten times stronger than the 1989 Quebec storm, and modeled its effect on the modern power grid. He found more than 350 transformers at risk of permanent damage and 130 million people without power. The loss of electricity would ripple across the social infrastructure with "water distribution affected within several hours; perishable foods and medications lost in 12-24 hours; loss of heating/air conditioning, sewage disposal, phone service, fuel re-supply and so on."

"The concept of interdependency," the report notes, "is evident in the unavailability of water due to long-term outage of electric power -- and the inability to restart an electric generator without water on site."

The strongest geomagnetic storm on record is the Carrington Event of August-September 1859, named after British astronomer Richard Carrington who witnessed the instigating solar flare with his unaided eye while he was projecting an image of the sun on a white screen. Geomagnetic activity triggered by the explosion electrified telegraph lines, shocking technicians and setting their telegraph papers on fire; Northern Lights spread as far south as Cuba and Hawaii; auroras over the Rocky Mountains were so bright, the glow woke campers who began preparing breakfast because they thought it was morning. Best estimates rank the Carrington Event as 50% or more stronger than the superstorm of May 1921.

"A contemporary repetition of the Carrington Event would cause... extensive social and economic disruptions," the report warns. Power outages would be accompanied by radio blackouts and satellite malfunctions; telecommunications, GPS navigation, banking and finance, and transportation would all be affected. Some problems would correct themselves with the fading of the storm: radio and GPS transmissions could come back online fairly quickly. Other problems would be lasting: a burnt-out multi-ton transformer, for instance, can take weeks or months to repair. The total economic impact in the first year alone could reach $2 trillion, some 20 times greater than the costs of a Hurricane Katrina or, to use a timelier example, a few TARPs.

What's the solution? The report ends with a call for infrastructure designed to better withstand geomagnetic disturbances, improved GPS codes and frequencies, and improvements in space weather forecasting. Reliable forecasting is key. If utility and satellite operators know a storm is coming, they can take measures to reduce damage by disconnecting wires, shielding vulnerable electronics, powering down critical hardware. A few hours without power is better than a few weeks.

NASA has deployed a fleet of spacecraft to study the sun and its eruptions. The Solar and Heliospheric Observatory (SOHO), the twin STEREO probes, ACE, Wind, and others are on duty 24x7.

NASA physicists use data from these missions to understand the underlying physics of flares and geomagnetic storms; personnel at NOAA's Space Weather Prediction Center use the findings, in turn, to hone their forecasts.

At the moment, no one knows when the next super solar storm will erupt. It could be 100 years away or just 100 days. It's something to think about.

Right now, the solar cycle is emerging from a valley -- the deepest of the past century. In 2008 and 2009, the sun set Space Age records for low sunspot counts, weak solar wind, and low solar irradiance. Up until these recent events, the sun had gone more than two years without a significant solar flare.

"In our professional careers, we've never seen anything quite like it," says Dean Pesnell of the Goddard Space Flight Center. "Solar minimum has lasted far beyond the date we predicted in 2007."

In recent months, however, the sun has begun to show timorous signs of life. Small sunspots and "proto-sunspots" began popping up with increasing frequency. Enormous currents of plasma on the sun's surface ("zonal flows") began gaining strength. Radio astronomers detected a tiny but significant uptick in solar radio emissions. All these things were the precursors of an awakening Solar Cycle 24.

With the the events of this past week, we can safely say that the new solar cycle has started up.

For a copy of the 132 page NASA-funded report by the National Academy of Sciences entitled Severe Space Weather Events—Understanding Societal and Economic Impacts: