"Now This is What It's Like When Worlds Collide..." 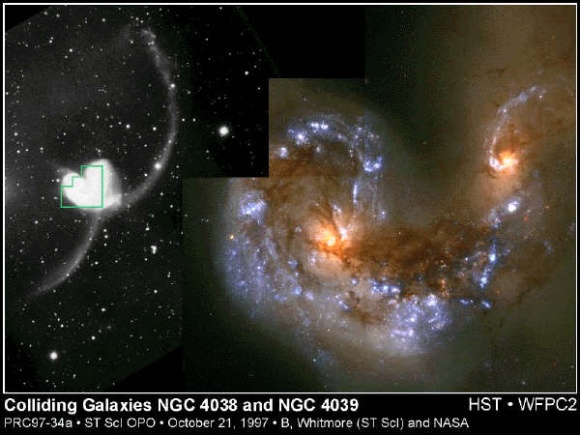 Five billion years from now, our Milky Way galaxy will collide with the Andromeda galaxy. This will mark a moment of both destruction and creation. The galaxies will lose their separate identities as they merge into one. At the same time, cosmic clouds of gas and dust will smash together, triggering the birth of new stars.

To understand our past and imagine our future, we must understand what happens when galaxies collide. But since galaxy collisions take place over millions to billions of years, we can't watch a single collision from start to finish. Instead, we must study a variety of colliding galaxies at different stages. By combining recent data from two space telescopes, astronomers are gaining fresh insights into the collision process.

"We've assembled an atlas of galactic 'train wrecks' from start to finish. This atlas is the first step in reading the story of how galaxies form, grow, and evolve," said lead author Lauranne Lanz of the Harvard-Smithsonian Center for Astrophysics (CfA).

The new images combine observations from NASA's Spitzer Space Telescope, which observes infrared light, and NASA's Galaxy Evolution Explorer (GALEX) spacecraft, which observes ultraviolet light. By analyzing information from different parts of the light spectrum, scientists can learn much more than from a single wavelength alone, because different components of a galaxy are highlighted.

GALEX's ultraviolet data captures the emission from hot young stars. Spitzer sees the infrared emission from warm dust heated by those stars, as well as from stellar surfaces. Therefore, GALEX's ultraviolet data and Spitzer's infrared data highlight areas where stars are forming most rapidly, and together permit a more complete census of the new stars.

In general, galaxy collisions spark star formation. However, some interacting galaxies produce fewer new stars than others. Lanz and her colleagues want to figure out what differences in physical processes cause these varying outcomes. Their findings will also help guide computer simulations of galaxy collisions.

"We're working with the theorists to give our understanding a reality check," said Lanz. "Our understanding will really be tested in five billion years, when the Milky Way experiences its own collision."

Caltech leads the Galaxy Evolution Explorer mission and is responsible for science operations and data analysis. NASA’s Jet Propulsion Laboratory, also in Pasadena, manages the mission and built the science instrument. The mission was developed under NASA’s Explorers Program managed by the Goddard Space Flight Center, Greenbelt, Md. Researchers sponsored by Yonsei University in South Korea and the Centre National d'Etudes Spatiales (CNES) in France collaborated on this mission.

Headquartered in Cambridge, Mass., the Harvard-Smithsonian Center for Astrophysics (CfA) is a joint collaboration between the Smithsonian Astrophysical Observatory and the Harvard College Observatory. CfA scientists, organized into six research divisions, study the origin, evolution and ultimate fate of the universe.