Our Milky Way Galaxy is Warped and Vibrating Like a Drum 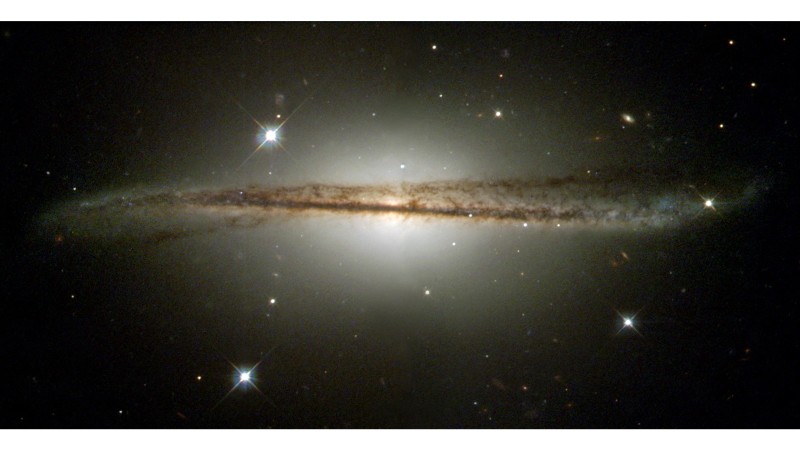 Astronomers have pondered for years why our galaxy, the Milky Way, is warped. Data from ESA’s star-mapping satellite Gaia suggest the distortion might be caused by an ongoing collision with another, smaller, galaxy, which sends ripples through the galactic disc like a rock thrown into water. This edge-on image of Galaxy ESO 510-G13 shows what the Milky Way Galaxy may look like from a distance. (Image Credit: NASA, Space Telescope Science Institute)

Our Milky Way Galaxy is Warped and Vibrating Like a Drum

Astronomers have known since 1957 that the Milky Way’s disc – where most of its hundreds of billions of stars reside – is not flat but somewhat curved upwards on one side and downwards on the other. For years, they debated what is causing this warp. They have proposed various theories including the influence of nearby galaxies or the effects of an imaginary dark matter halo.

With its unique survey of more than one billion stars in our galaxy, ESA’s star-mapping satellite Gaia might hold the key to solving this mystery. A team of scientists using data from the second Gaia data release has now confirmed previous hints that this warp is not static but changes its orientation over time. Astronomers call this phenomenon precession and it could be compared to the wobble of a spinning top as its axis rotates.

Moreover, the speed at which the warp precesses is much faster than expected – faster than the intergalactic magnetic field or the dark matter halo would allow. That suggests the warp must be caused by something else. Something more powerful – like a collision with another galaxy.

“We measured the speed of the warp by comparing the data with our models. Based on the obtained velocity, the warp would complete one rotation around the center of the Milky Way in 600 to 700 million years,” says Eloisa Poggio of the Turin Astrophysical Observatory, Italy. “That’s much faster than what we expected based on predictions from other models, such as those looking at the effects of the non-spherical halo.”

The warp’s speed is, however, slower than the speed at which the stars themselves orbit the galactic center. The Sun, for example, completes one rotation in about 220 million years.

Such insights were only possible thanks to the unprecedented ability of the Gaia mission to map our galaxy, the Milky Way, in 3D, by accurately determining positions of more than one billion stars in the sky and estimating their distance from us. The flying saucer-like telescope also measures the velocities at which individual stars move in the sky, allowing astronomers to ‘play’ the movie of the Milky Way’s history back and forward in time over millions of years.

“It’s like having a car and trying to measure the velocity and direction of travel of this car over a very short period of time and then, based on those values, trying to model the past and future trajectory of the car,” says Ronald Drimmel, a research astronomer at the Turin Astrophysical Observatory. “If we make such measurements for many cars, we could model the flow of traffic. Similarly, by measuring the apparent motions of millions of stars across the sky we can model large scale processes such as the motion of the warp.”

The astronomers do not yet know which galaxy might be causing the ripple nor when the collision started. One of the contenders is Sagittarius, a dwarf galaxy orbiting the Milky Way, which is believed to have burst through the Milky Way’s galactic disc several times in the past. Astronomers think that Sagittarius will be gradually absorbed by the Milky Way, a process which is already underway.

“With Gaia, for the first time, we have a large amount of data on a vast amount stars, the motion of which is measured so precisely that we can try to understand the large scale motions of the galaxy and model its formation history,” says ESA’s Gaia deputy project scientist Jos de Bruijne. “This is something unique. This really is the Gaia revolution.”

As impressive as the warp and its precession appear on the galactic scale, the scientists reassure us that it has no noticeable effects on life on our planet.

Gaia previously uncovered evidence of collisions between the Milky Way and other galaxies in the recent and distant past, which can still be observed in the motion patterns of large groups of stars billions of years after the events occurred.

Meanwhile, the satellite, currently in the sixth year of its mission, keeps scanning the sky and a Europe-wide consortium is busy processing and analyzing the data that keeps flowing towards Earth. Astronomers across the world are looking forward to the next two Gaia data releases planned for later in 2020 and in the second half of 2021, respectively, to tackle further mysteries of the galaxy we call home.

Back in 2006, another analysis of the warped nature of the Milky Way Galaxy at the University of California, Berkeley found that the two most prominent of the Milky Way's satellite galaxies - a pair of galaxies called the Magellanic Clouds - appeared to be interacting with the Milky Way to create the mysterious warp in the galactic disk that had puzzled astronomers for half a century.

The warp, seen most clearly in the thin disk of hydrogen gas permeating the galaxy, extends across the entire 200,000-light year diameter of the Milky Way, with the Sun and Earth sitting somewhere near the crease. At the time, Leo Blitz, professor of astronomy at the University of California, Berkeley, and his colleagues, Evan Levine and Carl Heiles, charted this warp and analyzed it in detail for the first time, based on a then new galactic map of hydrogen gas (HI) emissions.

They found that the atomic gas layer was vibrating like a drum and that the vibration consisted almost entirely of three notes, or modes.

Astronomers previously dismissed the Magellanic Clouds - comprised of the Large and Small Magellanic Clouds - as a probable cause of the galactic warp because the galaxies' combined masses are only 2 percent that of the disk. This mass was thought too small to influence a massive disk equivalent to about 200 billion Suns during the clouds' 1.5 billion-year orbit of the galaxy.

Nevertheless, at the time of the study, theorist Martin D. Weinberg, a professor of astronomy at the University of Massachusetts, Amherst, teamed up with Blitz to create a computer model that took into account the Milky Way's dark matter, which, though invisible, is believed to be 20 times more massive than all visible matter in the galaxy combined. The motion of the clouds through the dark matter creates a wake that enhances its gravitational influence on the disk. When this dark matter is included, the Magellanic Clouds, in their orbit around the Milky Way, very closely reproduce the type of warp observed in the galaxy.

"The model not only produces this warp in the Milky Way, but during the rotation cycle of the Magellanic Clouds around the galaxy, it looks like the Milky Way is flapping in the breeze," said Blitz, director of UC Berkeley's Radio Astronomy Laboratory.

"People have been trying to look at what creates this warp for a very long time," Weinberg said. "Our simulation is still not a perfect fit, but it has a lot of the character of the actual data."

The interaction of the Magellanic Clouds with the dark matter in the galaxy to produce an enigmatic warp in the hydrogen gas layer is reminiscent of the paradox that led to the discovery of dark matter some 35 years ago. As astronomers built better and better telescopes able to measure the velocities of stars and gas in the outer regions of our galaxy, they discovered these stars moving far faster than would be expected from the observed number and mass of stars in the entire Milky Way. Only by invoking a then heretical notion, that 80 percent of the galaxy's mass was too dark to see, could astronomers reconcile the velocities with known theories of physics.

Though no one knows the true identity of this dark matter - the current consensus is that it is exotic matter rather than normal stars too dim to see - astronomers are now taking it into account in their simulations of cosmic dynamics, whether to explain the lensing effect galaxies and galaxy clusters have on the light from background galaxies, or to describe the evolution of galaxy clusters in the early universe.

Some physicists, however, have come up an alternative theory of gravity called Modified Newtonian Dynamics, or MOND, that seeks to explain these observations without resorting to belief in a large amount of undetected mass in the universe, like an invisible elephant in the room. Though MOND can explain some things, Weinberg thinks the theory will have a hard time explaining the Milky Way's warp.

"Without a dark matter halo, the only thing the gas disk can feel is direct gravity from the Magellanic Clouds themselves, which was shown in the 1970s not to work," he said. "It looks bad for MOND, in this case."

Because many galaxies have warped disks, similar dynamics might explain them as well. Either way, the researchers say their work suggests that warps may provide a way to verify the existence of the dark matter.

The starting point for this research was new spectral data released this past summer about Hydrogen's 21-centimeter emissions in the Milky Way. The survey, the Leiden-Argentina-Bonn or LAB Survey of Galactic HI, merged a northern sky survey conducted by astronomers in the Netherlands (the Leiden/Dwingeloo Survey) with a southern sky survey from the Instituto Argentino de Radioastronomía. The data were corrected by scientists at the Institute for Radioastronomy of the University of Bonn, Germany.

Blitz, Levine, and Heiles, UC Berkeley professor of astronomy, took these data and produced a new, detailed map of the neutral atomic hydrogen in the galaxy. This hydrogen, distributed in a plane with dimensions like those of a compact disk, eventually condenses into molecular clouds that become stellar nurseries.

With map in hand, they were able to mathematically describe the warp as a combination of three different types of vibration: a flapping of the disk's edge up and down, a sinusoidal vibration like that seen on a drumhead, and a saddle-shaped oscillation. These three "notes" are about 64 octaves below middle C.

"We found something very surprising, that we could describe the warp by three modes of vibration, or three notes, and only three," Blitz said, noting that this rather simple mathematical description of the warp had escaped the notice of astronomers since the warp's discovery in 1957.

"We were actually trying to analyze a more complex 'scalloping' structure of the disk, and this simple, elegant vibrational structure just popped out," Levine added.

The current warp in the gas disk is a combination of these three vibrational modes, leaving one-half of the galactic disk sticking up above the plane of stars and gas, while the other half dips below the disk before rising upward again farther outward from the center of the galaxy.

Weinberg thought he could explain the observed warp dynamically, and used computers to calculate the effect of the Magellanic Clouds orbiting the Milky Way, plowing through the dark matter halo that extends far out into the orbit of the clouds.

What he and Blitz found is that the clouds' wake through the dark matter excites a vibration or resonance at the center of the dark matter halo, which in turn makes the disk embedded in the halo oscillate strongly in three distinct modes. The combined motion during a 1.5 billion year orbit of the Magellanic Clouds is reminiscent of the edges of a tablecloth flapping in the wind, since the center of the disk is pinned down.

"We often think of the warp as being static, but this simulation shows that it is very dynamic," Blitz said.